Sing Party does a competent job of letting you sing a bunch of songs and occasionally earn points doing so.

Karaoke video games are easy to come by these days, regardless of what platform you have. But there are surprisingly few that are family-friendly without being based entirely on a children's property, and even fewer that try to nail the public performance aspect of karaoke rather than focusing on score alone. Sing Party tries to fill those gaps on the Wii U, and while it doesn't yet take proper advantage of the system's online capabilities, it's a solid experience that accomplishes what it sets out to do.

The primary focus of the Wii U's gamepad is found in Party mode, which is the mode at the top of the game's menu. Here, the gamepad allows the lead singer to look at his or her audience while singing as opposed to the TV--something that brings video game karaoke just a little bit closer to the experience you might find in a karaoke bar. The singer's lyrics are displayed on the gamepad, while the audience gets their own occasional words or suggested actions, like swaying to the music, via the TV in case they want to participate in the song. This mode isn't scored, so there's less worry about embarrassing yourself with a poorly graded performance. It's tailor-made for those who are untalented (or intoxicated) but still want to perform. Sadly (and oddly), this is the only mode in which you see lyrics on the gamepad.

If you want a more Rock Band-esque experience of earning stars and high scores for your singing skills, there is Sing mode. Words aren't displayed on the gamepad in this mode either, forcing you to look at the TV for lyrics, as well as a pitch meter. If audience members want, however, they can grab the gamepad to adjust sound levels or add songs to the playlist on the fly while the singer is doing his or her thing. They can also use the touch screen to make instrumental beats and play along with the song, which usually translates into "mash the touch screen to make noise that will throw the singer off, because that's what friends are for." A couple of Wii remotes can be synced as "instruments," but this, too, is just more unnecessary noise.

There's not much in the way of interesting progression in Sing mode, though. All of the game's songs are unlocked from the start, meaning you are only shooting for high scores. There are no difficulty settings and no way to sort from easy songs to hard songs, so there's never much sense of getting better at the game. The game does present you with challenges as you play, letting you earn records and level up a meaningless rank for accomplishing tasks such as playing for 20 minutes or earning 15 stars. There are a few such challenges that at least tempt you into playing slightly differently (such as playing three songs with the letter D in the title), but for the most part, this entire system feels meaningless and is not compelling.

The last mode, Team mode, seems intended for large groups who want to compete in more of a party game setting. After taking a picture of each team with the gamepad's camera, teams take turns singing their way through a selection of song-based minigames, such as Choir, which has the whole group singing into the gamepad's microphone for a collective score, or Relay, in which you are constantly passing the microphone from team member to team member. People who don't want to sing can participate by voting as a judge after each game, giving bonus points to the team they think did best.

Like with many music games, your enjoyment of Sing Party is greatly influenced by how much affinity you have for its soundtrack. In this sense, Sing Party aims for variety over a focus on particular genres. Will you enjoy singing both Frank Sinatra and Nickelback equally? Probably not. It is unlikely that one person will like listening to, much less singing, every single one of the 50 songs on the disc, but it does mean that when playing with large groups, there is probably something for everybody. Players may know only the chorus of a particular song, but you can be sure that they'll nail that chorus when it comes up.

Sing Party's package comes with only one microphone, but that's enough for most game modes (even Team mode, since you're usually passing the microphone and taking turns). But if you have your heart set on performing duets, don't worry too much. The game is refreshingly open to accepting other USB microphones. While the official stance is that any licensed Wii microphone will work, a PlayStation 2 microphone that came included with High School Musical: Sing It functions just fine, as does a Rock Band microphone intended for use with the Xbox 360.

It's nothing particularly special, but Sing Party does deliver a solid singing experience with a slick interface and local multiplayer options that are easy to get into. You may not like every song in the package, but according to the box, more songs will be available to download later (as of launch, Sing Party does not have any sort of in-game store). As the name implies, the game is best in a group setting, because a lack of online features and compelling single-player progression hampers the experience alone. It doesn't make the case for Wii U doing things that are impossible otherwise, but it's a well-made karaoke game that is fun with friends. 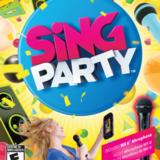