As a game, Silver is well-intentioned but flawed. It draws on a variety of console role-playing's staple elements, but never to truly great effect.

Console-style games are rare on the PC. That platform excels at deeper, more complex fare than one is likely to find on a video game system, thanks to its wide variety of input methods and its extensive hardware base. In particular, PC RPGs are known for stats and number crunching, while the typically Japanese-developed console brand of RPG focuses more closely on graphics, story, and characters - the technical versus the stylistic, in a sense. UK-based developer Spiral House clearly felt that PC gamers needed a bit more style in their role-playing, so they created Silver, which was released on the PC last year. Now, the console-style RPG intended for the PC has ironically made its way to Dreamcast. However, Console gamers already used to the style Silver emulates may not be so accepting.

Silver's story is a familiar one as video game adventures go. The game's title character is a wicked sorcerer-emperor who oversees the world of Jarrah with an iron fist and a hard heart. One day, Silver orders that all the fair maidens of the land be brought before him so that he can select a new bride. His minions then round up Jarrah's female population for Silver's ghastly perusal; needless to say, the male half isn't pleased. The player takes control of David, a kindly, if stereotypically blonde, knight whose wife Jennifer was among the captured. David strikes out, full of vim and vigor, to stop Silver and retrieve the women. On his journey, David learns that Silver is trying to strike a deal with the evil god Apocalypse, and thus his quest gains even greater import. David also learns that only the combined power of eight magical orbs, which have been lost for years, can defeat Silver, and thereafter most of the game is devoted to obtaining these orbs. This isn't the most generic plotline ever, but it sure isn't Dickens, either. Add one part Final Fantasy, two parts Legend of Zelda, and stir.

The graphical presentation in Silver is crisp, but not particularly inspired. Characters are represented by simplistic polygonal models, and though they don't sport much detail, they're usually seen from such great distance that detail isn't necessary. The world of Jarrah is composed of prerendered backdrops like those found in the PlayStation Final Fantasy titles. They often contain hot spots, such as switches, doors, or treasure chests, which can be revealed by holding down the L trigger. This is an entirely necessary feature, because these spots often blend into the background, and they are sometimes almost impossible to detect. The static camera angles used in some backgrounds are poorly chosen because of their distance from the action; it's not uncommon for Silver to force David into a battle when he's only a few pixels tall as seen by the player.

Speaking of battle, Silver conducts combat much like a typical Zelda title. All the fighting happens in real-time on the standard background screens. David is joined in battle by up to two companions, starting with his grandfather (whose death is perhaps one of the most contrived moments in video game history) and ranging from the slingshot-wielding rebel girl Sekune to Jug, the standard barbarian type. The AI that controls the other party members works periodically, but it is largely a failure, as David's friends are never eager to avoid attacks or to attack enemies themselves. Fortunately, control can be passed at will from David to either of his compatriots, although all the characters are nearly identical in actual combat. A variety of fighting moves are provided, such as jabs, swipes, and backhand chops, but frankly the best strategy is simply to point in the direction of the enemy and hit the attack button as fast as possible.

Special weapon attacks, magical items, and magic itself round out the list of offensive and defensive options at David's disposal. Weapons, magic, and healing items are all controlled from the "pie menu," a circular arrangement that otherwise behaves like any standard RPG menu. The pie menu also allows access to David's stats, but these numbers seem superficial because the game raises his level only at preset times (specifically, after defeating a boss). A world map is the last notable feature found on the pie menu, and it allows the player to instantly transport back to any location previously visited.

As a game, Silver is well-intentioned but flawed. It draws on a variety of console role-playing's staple elements, but never to truly great effect. The story is bland. The graphics are decent, but certainly not earth-shattering. Combat situations usually degenerate into a frenzy of button mashing, and they're often obscured by camera problems. Music, often a high point in RPGs, is mostly average and rarely above average. On the whole, the voice acting is reproachful (especially the lines recorded for David himself, who is apparently one of the most deadened characters in RPG history). Nothing about Silver is unbearably horrid, but it never clicks like really classic games do.

It's amusing that Silver, a game targeted at an audience not used to the conventions of console role-playing, is now available for one of the very consoles on which those conventions are repeatedly exercised. Silver might be novel for a PC enthusiast looking for a bit of action, but jaded console gamers won't find anything new. If you've got an insatiable jones for RPGs and adventure games, playing Silver wouldn't be the worst thing you've ever done, but it wouldn't really be the best either. 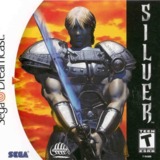