Those interested in playing Silhouette Mirage should look in their favorite importer's bargain bins, as what was once a perfectly fun game is now an unrewarding chore overwrought with tedium.

After more than a year of delays, Working Designs has finally delivered Silhouette Mirage. This isn't the same Silhouette Mirage that debuted on the Saturn nearly three years ago, however - the game has somehow transformed from a delightfully quirky platforming romp into an average, unbalanced, and tedious exercise meant for "hard-core gamers."

In typical Treasure fashion, Silhouette Mirage's 2D gameplay is integrated with a lot of story and dialogue. The Edo computer system has malfunctioned, splitting the world's creatures into two opposing classes, Silhouette and Mirage. In the midst of a massive civil war between these two factions, a lone guardian possessing both attributes, Shyna Nera Shyna, wakes to set the Edo system right. Unfortunately, the memory of the Edo system's location was lost during Shyna's long slumber, forcing her to entrust her fate to a bug, a friendly Mirage summoner. In her quest, Shyna will face some of the weirdest and most evil characters to ever grace gaming.

Silhouette Mirage's game mechanics are certainly innovative, if a little complex. Each of Shyna's two sides embodies one of the attributes of Silhouette and Mirage, as do all weapons, depending on which side is facing the enemy. Only the Mirage side of a weapon can injure Silhouette enemies and vice versa. All of the game's parasitic weapons, bought from rabbity salesmen scattered throughout the game, are powered by Shyna's spirit level. As weapons are fired, Shyna's spirit level drops, weakening her attacks as it diminishes. You can refill your spirit meter by draining enemies of their spirit energy, done by attacking Mirage enemies with Mirage weapons and vice versa. Dealing with Shyna's split personality is made easier through a variety of strategic throws, slides, and flips to manipulate the enemy's position relative to Shyna so the appropriate side can attack. Fortunately, the game provides you with an extensive tutorial illustrating and training you to pull off all of these moves. In addition to the strategic moves, Shyna can grapple enemies with her hair and beat money from their pockets - money that can be used to buy new weapons, health, and spirit energy. Confused yet? It's normal - Silhouette Mirage's complex play mechanics take some getting used to, and fully understanding the Silhouette/Mirage concept is crucial to winning the game, especially when fighting the game's awesome bosses.The need to drain enemies of their spirit energy is new to the US version and is the single greatest flaw in the game. Not only does this force you to constantly ration firepower, it also weakens your weapons as you fire them. As a result, a weapon will oftentimes not be there when you need it most. Compounding this problem is the inflated cost of weapons. The US version significantly ups the price of the game's weapons, forcing you to beat each and every enemy if you want a half-decent arsenal. As a result, the price for using weapons other than the boring one you start with is precipitously high and will cause some players to opt in favor of simply not buying weapons for most of the game. Additionally, if you want to succeed in the game, expect to spend lots of time tediously robbing and draining every enemy before you kill it. A new two-player battle mode is unlocked if you complete all five of the game's paths with fewer than nine lives, but this little doodad is hardly worth the boredom and effort required to achieve it - most players will probably put the game away after completing one path.

Because Silhouette Mirage is a port of an old Saturn game, it is probably no surprise that the graphics are dated. While the style is appropriately wacky, there's very little that's impressive about Silhouette Mirage's graphics, even if the game "pushes the 2D capabilities of your PlayStation game console to its limit." While Silhouette Mirage's catchy, upbeat tunes are perfectly suited for the game, the localization team has outdone itself in the annoying-voice department. The game's unnecessary rebalancing makes this especially obvious; for example, players will be forced to hear Shyna yell "BAM!" every time she hits an enemy up for cash.

Those interested in playing Silhouette Mirage should look in their favorite importer's bargain bins, as what was once a perfectly fun game is now an unrewarding chore overwrought with tedium. While you won't get to see the exclusive Lunar 2 video, you'll be treated to a far more competent and enjoyable game experience. And hey, that's what we're in this for, right? 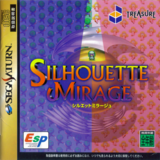 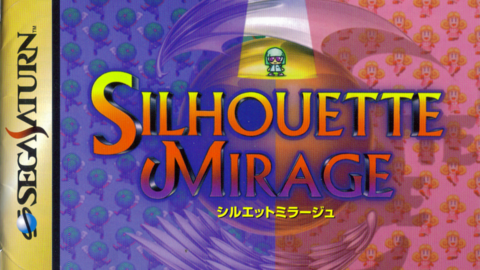 Those interested in playing Silhouette Mirage should look in their favorite importer's bargain bins, as what was once a perfectly fun game is now an unrewarding chore overwrought with tedium.