At first glance, Silent Debuggers for the TurboGrafx-16 looks like a sci-fi rendition of Eye of the Beholder. At second glance, you'll realize it's just a clunky, choppy, repetitive grind that's just about no fun to play.

In the game, you play the role of a bounty hunter that has to eliminate the aliens occupying the six floors of a space station before the security system blows the station to bits. While a funky, beat-filled soundtrack plays in the background, you'll need to pay attention to the onscreen radar and the text clues provided by your partner in the control room to find the rooms where the ugly beasts are holed up. At that point, you'll mash the attack button and trade blows until, hopefully, your alien opponent explodes in a flourish of pixilated guts. From start to finish, 100 minutes is all the time you have to wander the halls, blast aliens, and make frequent trips back to designated recharge rooms to replenish your shields and weapons.

Your movements and those of your enemies are very limited. Pushing up or down on the control pad will cause you to move forward or step back one whole room, and tapping left or right will rotate your view in 90-degree increments. If you encounter an enemy, it'll either stay put in the middle of the screen to hack away at you, or move straight back to avoid you. You have the same two options: shoot or back up. There's no strafing or ducking. As you'd expect, mindlessly mashing the attack button gets boring real fast, especially because the rooms on each floor of the station all look alike, apart from the color of the walls and the occasional sign marker.

Simplicity aside, the worst thing about the game is that it's literally a pain to watch. The beautifully drawn anime-style opening scenes give way to a flickering, choppy mess that will make your eyes and head hurt if you play for too long. When you walk or turn, the view doesn't change smoothly. Instead, one static 3D scene is quickly replaced by another, with only one or two intermediate frames in-between. A typical enemy attack consists of two alternating frames that show the creature's claws or mouth "moving." If you can imagine walking down the street while rapidly opening and closing your eyes, that's what playing Silent Debuggers feels like. It's not a comfortable feeling. It's certainly not worth the 600 Wii points. 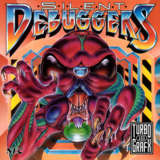 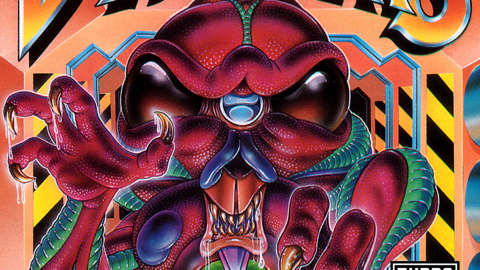 Silent Debuggers is a scrolling shooter from Data East.