While the two-player mode could use some help and is more of a throwaway feature, the single-player mode is worth every penny.

What happens when you take Metal Gear Solid, Bomberman, Trap Gunner, and Soukyugurentai and lock them in a room with a bottle of wine and three loaves of bread? In about nine months you get Silent Bomber, an unnaturally kick-ass action game from the unlikeliest of sources - Bandai, a company better known for churning out Gundam game after Gundam game.

Silent Bomber, simply put, is one of the most visceral, fast-paced, playable PlayStation games to arrive in the fading days of the 32-bit system. In Silent Bomber, you assume the role of Jutah (pronounced Utah) Fate, a nondescript man who must save the world from... some sort of... evil or something. The storyline is little more than a catalyst for you to embark on one of the coolest games to arrive on the PlayStation in some time.

Amazingly, the premise is simpler than the storyline. Throughout a well-balanced series of levels, you must navigate Jutah through hostile territory, bombing the bejesus out of the opposition, who vary in complexity and challenge. For example, while the first few sets of enemies are mindless drones who simply veer around the stage, lobbing shots in your general direction, later enemies deliberately swarm around you, mindful of your positioning, and attack with bombs, guns, and swords. To negotiate with these enemies, you have a number of options available to you. Your first and most basic attack is the standard lock-on bomb. When you press down and hold the attack button, a targeting arc will extend and lock on to whatever enemy happens to be in range. Once locked on, pressing the attack button again will launch a series of bombs and plant them on the enemy. The number of bombs you plant is determined by how many times you press the button and how many bombs you are allowed to carry. The number of bombs you carry is, in turn, determined by how many E-Chips you've found, but more on that later. Once the bombs are planted, you detonate them by pressing the triangle button, and depending on the strength of the opponent, he'll either be destroyed or require repeat attempts. Enemies are not the only object you can blow up either. In each level, there are gun turrets, robot-manufacturing plants, and simple structures, including glass windows, which can be blown up. If you destroy the structures that look almost like trash cans each one will leave behind items for you to collect. Certain structures will leave behind the aforementioned E-Chips, which, when gathered in volume, can be cashed in for power upgrades like increased bomb capacity, increased targeting arc range, and increased defense armor. Other power-ups left behind will give you either one of two health refills or one of three material liquids - gravity, electricity, or napalm. Each of the material liquids is effective in its own way, and they are much more than gratuitously palette-swapped smart bombs. Electricity material will stun and inflict great damage to enemies. Napalm will leave behind a large blanket of fire on the ground that will cause continued damage as long as the enemy remains inside it. Gravity liquid is perhaps the most effective of the three. Not only will it suck your opponents into a vortex, but it will also suck in shots and let you continuously plant regular bombs on your foes while they are trapped in the vortex. These weapons are particularly useful when you reach the boss levels. Varying wildly in challenge and style, each new boss will test your reflexes and resourcefulness. You are also equipped with a couple of other moves to aid you in your quest: a jump, a climbing jump, and a burst drive. The burst drive is essentially a dash, which can be done on the ground or in midair. The jumps are self-explanatory, and they can help you reach hard-to-grab items.

The game isn't short, and it will require plenty of time, lives, and patience to get past the final few hours of gameplay. Cranking the gameplay a few notches above typical is the combo system in Silent Bomber. Later in the game, after you've amassed a larger cache of bombs, you can plant them on multiple enemies at one time. Detonating the bombs all at one time and simultaneously destroying all the enemies will garner more points than if you disposed of them one at a time. Another way to score even more points is to plant all your bombs on one foe, wait until other enemies are within the explosion radius, and set off the bombs. Destroying multiple enemies with one exploding enemy will trigger a combo bonus worth more points. At the end of every level is a Street Fighter-like tally of time and health remaining and combo points accrued, and you'll receive an overall score. Adding to the awesome one-player game is a two-player versus mode that lets you select from 12 different characters, opponents, and bosses in the game and puts you in a VR arena to duke it out. This mode is far from balanced, as some characters have a distinct advantage over others, but it's still a fun distraction for a while. If the developer had managed to squeeze in a four-player simultaneous battle mode, the game would have been a true classic. As it is, two-player will have to do.

Graphically, the game is a rich, seamless blend of futuristic environments, pyrotechnic special effects, and a steady frame rate. Viewed generally from an overhead Metal Gear Solid-esque perspective, Silent Bomber's main fault is not letting you see far enough ahead into the distance. It's really a minor criticism, as it rarely causes problems during gameplay, but it would have been nicer to see a few virtual feet farther ahead. There is little of the polygon texture warping that is evident in most PlayStation titles, and pop-up and poly-clipping are virtually nonexistent. Character models are well modeled, with Jutah and the enemies both sporting solid design and accomplished animation. All the details, from the impressive opening CG movie down to the front-end menu selections, are all well designed, and they add to the all-around level of polish the game displays. Strangely, the localized version of the game seems a bit easier than the import version - usually it's the other way around. Enemies don't seem to need as many hits before blowing up, and you can even skip the tedious opening tutorial if you so choose - an option not available in the Japanese version. Sadly, the American voice acting in Silent Bomber is uniformly horrendous. Jutah sounds consistently underwhelmed by the chaos that surrounds him. The voice actor is apparently tone-deaf to the differences between "calm, cool, and collected" and "I've been on morphine for the last 12 hours; don't mind me." By the same token, his team members, usually in contact via intercom, sound hysterically out of control and overzealously excited. Thankfully, you can skip most of these sections by whacking the buttons. Voice acting aside, the game is a modern slice of gaming pleasure.

Offering great control, compelling twitch gameplay, and a fully realized game environment, Silent Bomber is one of the biggest surprises to come along in a long time. While the two-player mode could use some help and is more of a throwaway feature, the single-player mode is worth every penny. If the world were a just and fair place, and we know it isn't, Bandai would see fit to release a sequel at some point in the future, hopefully on a system with a little more hardware backing it up. As it is, don't let this one pass you by. 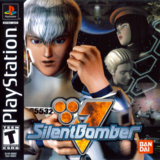 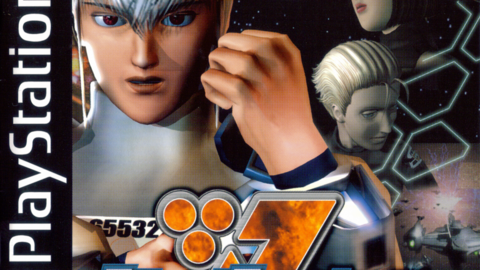 While the two-player mode could use some help and is more of a throwaway feature, the single-player mode is worth every penny.