Break out the party hats.

There's only so much you can do with the Breakout formula. At some point it all boils down to moving a paddle back and forth in order to hit a ball that in turn hits (and breaks) blocks, just like the Atari classic. But while the formula has been cloned and twisted numerous times over the decades, there are still times when the resulting game is well made, charming, and just different enough to make playing it a joy...or perhaps even a fiesta.

The "ball" in Siesta Fiesta is actually a character named Siesta. He's fallen into a remarkably deep sleep and doesn't realize he is drifting away to an island full of colorful creatures called fiestas. As the fiestas take Siesta on a tour of their colorful world, you control his bed at the bottom of the screen using either the stylus, the control pad, or the D-pad, with the stylus option being the most accurate. As Siesta bounces into the air, you want to move his bed below him to make sure he doesn't fall to the ground. If you tap the screen or hit a button right when Siesta lands on the bed (that is, when the ball hits the paddle), he travels higher than normal.

Again, this almost certainly won't sound new to you, but Siesta Fiesta does a few things to make it more than just a charming Breakout clone. For starters, rather than being static screens, most of the levels scroll from left to right. As the world moves, hitting targets with high point values becomes a test of not just accuracy, but also speed. If you can't break a certain block or get Siesta through a specific set of markers before they scroll off the screen, you miss out on a lot of points. At the end of each level, you are awarded a medal. You get bronze simply for making it to the end, while upgrading to silver can be a challenge in many cases. Gold medals are not handed out easily, and I ended the game with very few of them.

Siesta Fiesta does a surprisingly good job of mixing things up throughout the adventure. New block types and power-ups are introduced, some of which add a puzzle-like quality to the game. For example, there are arrow blocks that direct a fireball in the direction they're pointing, and a separate block rotates said arrows. Getting the arrows rotated just right before unleashing the fireball is key to earning a high score, especially if you can do it without hitting any blocks that deduct points from you.

Occasionally you encounter time trial levels, which encourage you to race to clear several screens of blocks as quickly as possible. Other levels alter your paddle, giving you (for example) a fan that levitates Siesta instead of bouncing him. At the end of each of the game's eight worlds you fight a boss, which usually involves a bit of brainpower to figure out how to make the enemy vulnerable before attacking it. It's not the most demanding mental activity, but the game encourages a surprising amount of thought and strategy.

Outside of the game's 64 levels, there's not much to explore. You're given a score, but there are no leaderboards, and there are no side games or infinite modes to occupy yourself with when the story is done. Still, the handful of hours it takes you to run through the game is probably enough to satisfy, and you're encouraged to go back to collect gold medals on every stage if you're still hungry for more.

Even without Siesta Fiesta's own twists and turns on the tried-and-true gameplay, it would be a very charming, well-made Breakout game. The music is upbeat, the visuals are colorful and nicely animated, and the basic physics of the ball bouncing on the bed/paddle feel nice. But the game's insistence on mixing things up makes it joyful throughout. Siesta Fiesta may not keep you coming back when it's over, but it's a lot of fun while it lasts. 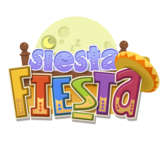 Britton Peele is no stranger to chips off the Breakout block, from Arkanoid to Firestriker to Wizorb. He spent about four hours completing all of Siesta Fiesta's levels, occasionally going back to try (in vain) for a gold medal.