Juggling the different characters' abilities is interesting, though some may not like the repetition or the game's gradual pace.

Shrek the Third for the Nintendo DS isn't an action adventure game in the traditional sense. Instead of jumping between platforms and hacking away at enemies with one character, you have to jockey control between three different characters and put their individual skills to use to help all three characters reach the exit at the end of each level. Alternatively, you can convince two of your friends to buy the game and play through it with each of you controlling one character. The levels tend to recycle the same enemies and obstacles, but managing the characters as if they were pieces in a puzzle game is strangely pleasant. The game also displays some attractive 3D graphics and makes good use of the system's touch screen and microphone features.

Each level is basically a giant puzzle that you gradually guide the characters through. As you walk along, you'll encounter doors that need to be unlocked, rickety elevators that need to be activated, and any number of switches and levers placed in spots that only a specific character can reach. You'll also run across knights, witches, demonic trees, and other monsters that you can dispatch using any of the characters' attacks. Shrek can smash through walls and floors, Puss can jump and crawl, and Artie can throw his shield at switches or use it to float across rivers. Meanwhile, Donkey is holed up in Merlin's shack watching the action unfold through a crystal ball. He contributes help from afar in the form of magic that you can call on to disarm enemies and levitate objects. The general idea is to keep your life and magic meters from draining completely as you guide the individual characters past their intended obstacles and through the different parts of the level, joining together as a group only until the next fork splits the characters up or when you eventually bring everyone to the exit.

Movement is handled with the directional pad or buttons. All other actions are initiated by interacting with the touch screen or blowing into the microphone. You can target enemies on the lower screen simply by tapping them, control the angle of Puss' jumps and Artie's shield tosses by flicking the stylus across the touch screen, and use Donkey's wind spell to attack airborne enemies or propel Artie across the water by blowing into the microphone. The game will occasionally misinterpret your input, but not so frequently that you'd want to trade the flexibility the touch screen and microphone give you for button-based controls that wouldn't give you as much control over the characters' abilities.

When you first start the game, you'll hold the system so that the screens are side by side and watch a story sequence unfold as if someone were reading to you from a book of fairy tales. The story is told from Donkey's point of view. An actor that sounds remarkably like Eddie Murphy narrates the text as the pages flip by, and the characters in the drawings sometimes react to what's being said with cute gestures. You'll see a few more of these story sequences as you go through the game. When you're playing, however, you hold the system as you normally would, with one screen on top of the other. Your characters' nearby surroundings are displayed on the bottom screen, while the upper screen shows what's directly above you. Movement happens on a two-dimensional plane, but the world of Far, Far Away and the characters are brought to life with richly detailed 3D graphics. As you go through each level, you'll notice cute touches, such as flowing rivers, falling leaves, and fluttering insects. Smaller enemies aren't all that impressive, but larger ones span both screens. Character movements and transitions are also exceptionally fluid. Unfortunately, the audio accompanying the action is merely tolerable. The cheesy medieval music that plays during each level is tacky instead of whimsical, and the sound effects consist of some unremarkable noises and a few brief vocal comments.

While the first few levels take only a couple of minutes to clear, later levels will have you backtracking all over the place and investing anywhere from 10 to 20 minutes. Clocking in at 16 levels, the game should take most people four or five hours to finish. Whether you feel like sticking it out to the end will depend mainly on your expectations going in. The same obstacles and switches are recycled constantly. So, even though the controls are clever and the levels gradually grow more convoluted, you encounter the same situations and perform the same actions over and over. Fans of the puzzle genre probably won't mind that sort of repetition, but anyone expecting a more dynamic experience may feel boredom start to set in after completing five or six levels. Some people may also be bothered by the choppy flow of the single-player mode, which is a result of having to wait a couple of seconds for the screen to change perspectives every time you switch characters. You can eliminate those pauses by playing cooperatively with one or two other people, since each player controls his or her own character, but the problem there is that each player has to have a cartridge to get a co-op game going. It's hard to imagine three friends all buying their own cartridges when the multiplayer mode doesn't offer anything different from the solo mode, apart from the ability to control the characters independently.

Someone looking for the usual sort of action romp may end up disappointed with the Nintendo DS rendition of Shrek the Third. However, if you're a fan of the Shrek movies and think you might enjoy a more cerebral take on the adventure genre, then you may end up digging what the game has to offer. Just make sure to give yourself a break every few levels to minimize the fatigue that can result from constantly encountering the same puzzles. 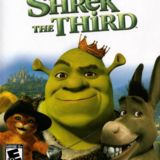 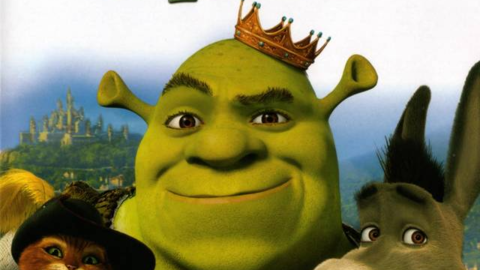 Shrek returns for a third showing, based on the DreamWorks Animation film of the same name.