Unless you're a huge fan of the Shrek characters, your money would be better spent on something else.

Shrek: Reekin' Havoc deserves credit for its wildly original premise. The ghost of Lord Farquaad has escaped the cemetery and is hypnotizing the various inhabitants of Fairytale land. Pinocchio is attacking villagers with his spear-like nose, the Big Bad Wolf has locked up the three little pigs, and rats from Hamlin are chewing up Gingerbread town. Playing as either Shrek or Fiona, your task is to explore the game's six different areas and use your fists to knock some sense into these errant fairy tale characters. Unfortunately, the game's clever premise is overshadowed by the game's repetitive nature.

Just like last year's Shrek: Hassle at the Castle, Shrek: Reekin' Havoc is a standard beat-'em-up. Fiona and Shrek have a basic assortment of punches and kicks, as well as combination attacks that you can perform with different combinations of the A and B buttons. Each enemy takes roughly one or two hits to defeat and will leave behind money, health, or rage items when it departs. Rage items look like leaves and allow you to fill Fiona and Shrek's rage meter. The R button activates the characters' ogre state, which makes them invincible and more powerful. Once in a while, you can pick up a tree branch and use it like a baseball bat--something that never ceases to be cool, no matter what game you find it in. Each area has multiple alleyways and doors you can enter, as well as rooftops and ladders that you can typically access by pushing a crate or making a well-timed jump.

On paper, the basic design and overall story behind Shrek: Reekin' Havoc sound like a unique and entertaining pairing for a video game. Early on, it's tough not to be impressed. The graphics are colorful and artistic, and some of the situations the game portrays are priceless. At one point, Humpty Dumpty starts tossing egg-like enemies at you from atop a flimsy wall. To get past him, you have to attack the wall until it disintegrates, which leaves Humpty Dumpty in pieces. In every level, the scenery and situations always remind you of what fairy tale you're in the middle of. The Peter Pan stage takes place on a mammoth galleon. In Gingerbread town, you can see chunks missing from the buildings that the rats have descended upon. The amount of detail and color in each level is significantly higher than what you'll see in most side-scrolling games on the GBA, but the animation used for the characters is a bit on the choppy side. Similarly, most of the game's background music is uplifting and full of instrumental melodies that are so clear you'll be tempted to hum along with them--but the sound and speech effects are an assortment of slaps and growls that seem plain by comparison.

Unfortunately, the real problem in Reekin' Havoc is that most of the levels are too long and too repetitive, and you're never really given a chance to do anything interesting besides throw rocks or punch at a slew of enemies. The pattern for each level is the same. You need to search the various alleys and rooms to find and rescue three hostages, and then make your way to the end of the level, where you'll fight against one of the hypnotized fairy tale characters. The levels in Shrek: Hassle at the Castle were decent in terms of size--not too small and not too large--but the levels in Shrek: Reekin' Havoc feel artificially drawn out, thanks to the addition of multiple alleyways and the inclusion of the hostage rescuing task. You end up spending so much time in each level that the creative impact of the scenery and situations wears off.

Despite the size of each level, it doesn't take long at all to plow through the game's six levels. After you beat Farquaad the first time, you can go back and replay any level to improve your rating. Otherwise, there aren't any bonus stages or multiplayer features, the latter of which is a bit of a shame, considering how much more enjoyable beat-'em-ups are with two players cooperating together.

Shrek: Reekin' Havoc starts out as a whimsical beat-'em-up, but it steadily creeps toward boredom as it presents the player with the same tasks and combat situations over and over again. Unless you're a huge fan of the Shrek characters, your money would be better spent on something else. Still, some of the fairy tale situations in the game are presented so cleverly that it's almost worth adding it to your collection just to see what happens next. 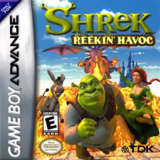 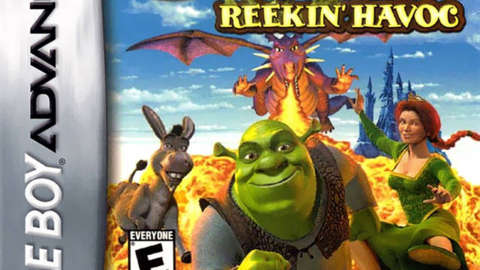 Unless you're a huge fan of the Shrek characters, your money would be better spent on something else.