The older kids who found some chuckles in the adult-aimed nudge-and-winks found in the original <i>Shrek</i> movie probably aren't going to find anything too compelling here.

The video game tie-in has basically become a standard part of your average summer family movie package, alongside the plush toys and the backpacks and all the other marketing flotsam. So, it's no surprise that Activision has released a Shrek 2 video game just weeks before the film opens. What is surprising, considering the bottom-of-the-barrel level of quality you usually get from kid-friendly licensed games, is that it's actually pretty good. Hot off of True Crime: Streets of LA, Shrek 2 seems like an extreme shifting of gears for developer Luxoflux, but to its credit, the game comes together fairly well. However, the older kids who found some chuckles in the adult-aimed nudge-and-winks found in the original Shrek movie probably aren't going to find anything too compelling here.

Though Shrek 2 the motion picture has yet to be released, the game seems to be based somewhat loosely on the film. Shrek and his new ogress bride, Fiona, along with Shrek's faithful companion, Donkey, go to meet Fiona's royal parents in Far Far Away, who are appalled that their daughter has married an ogre. With the help of a well-connected fairy godmother, the king hopes to rub out Shrek, which produces unexpected results.

For most of the game, you'll be controlling a pack of four characters--Shrek, Donkey, and Fiona serve as your primaries, though your party members regularly rotate out, with a cast of fairy-tale celebrities, including the Gingerbread Man, Lil' Red, Puss in Boots, and The Big Bad Wolf, among others, filling in empty slots. The action is largely puzzle-based with a bit of a focus on teamwork. The game is good about providing plenty of visual clues that make most of the obstacles a breeze. Though you'll only have control over one character at a time, a quick tap on the shoulder buttons allows you to cycle through them, which you'll be doing quite often since each character has its own specific talents, and the game is filled with obstacles that can only be conquered by using these specific talents the right way. This means that there's the occasional trial and error, but the game is pretty generous with the checkpoints, so you generally won't have to play through extended stretches of the game over and over again. The other three characters are controlled by the computer and they're usually solid about following your lead, though their pathing isn't always terrific and they will occasionally get snagged on an obstacle.

Having four characters at your disposal, and having the characters change with regularity, really gives you a lot of gameplay options, and Luxoflux does a good job of taking advantage of that. The beauty of the team-based design of Shrek 2 is that it easily transitions into a four-way multiplayer co-op game, and players can very easily join and drop out of games that are already in progress.

The game will regularly veer off from the action and the puzzle solving and turn into a simple beat-'em-up, which isn't nearly as fun or satisfying because the fighting mechanics are extremely limited and the controls are a little too sloppy. The game is sprinkled with Hero Time minigames, which single out one of your team members for a specific task. For example, in one level, Donkey has to ride on top of a dragon while pursuing Fiona through a dark and menacing forest. These little self-contained bits are some of the best fun that Shrek 2 has to offer, as they help add a bit more variety to the experience.

There's not a lot of variation in quality between the three console versions of Shrek 2, and this extends to the visual presentation--which is a good thing, since the game looks quite nice on all platforms. Though the scale of the levels are generally pretty modest--the feeling that you're in a level and not an actual place is pretty pervasive throughout the game--what you're shown is consistently well crafted (like the variety of fairy tale-inspired environments you will travel through). The playable characters are surprisingly spot-on interpretations of their movie characters, and their animations, while a little limited, always look smooth and appropriate for the characters. You can really tell that Luxoflux worked pretty closely with the design team at Dreamworks to get the characters looking as good as they do. The camera can occasionally be a bit stubborn; it'll change how much control you have and that can make it difficult to get a good perspective on the action. However, this is the biggest complaint that can be lodged against the game's visuals.

Unfortunately, Activision was unable to get the actual stars of Shrek 2 to hit the boards for the game, leaving the voice-acting duties for Shrek 2 the game to a team of stand-ins. If you weren't paying close attention, you might be able to mistake the fake Mike Myers and the fake Eddie Murphy for the real things, but the truth becomes plainly obvious before the game is over. A lot of the voice acting is pretty decent, but the fact that a lot of the bits end up repeating, and that a small percentage of what they say is actually funny or appropriate, undermines the actual delivery. The rest of the game's sound design is pretty uniformly unspectacular--the in-game sound effects and the chipper orchestrated soundtrack aren't bad, but there's nothing that is really catchy enough to stay with you.

If you're old enough to buy T-rated games, Shrek 2 really isn't for you. The game is put together pretty well, but the game is very simple and very short. On top of that, the lame wordplay and fart jokes that pass for humor just don't cut it. On the other hand, the game is maybe a little too complex for the kids who are still cutting their teeth on video games, which leaves the 'tween market as the sweet spot for Shrek 2. For this rather specific audience, Shrek 2 is a good fit.

Editor's note 05/06/04: Changes have been made to this review to address factual inaccuracies regarding character selection and the Hero Time minigames. GameSpot regrets the error. 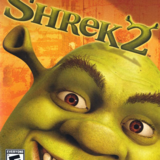