This fast-paced Xbox Live space shooter is a little too retro for its own good.

Despite what the name might lead you to believe, Shred Nebula is not the name of a new metalcore band. This unique moniker has actually been given to a top-down space shooter for Xbox Live Arcade. Unfortunately, this nifty title is the most innovative aspect of the game. Developer CrunchTime Games offers up big-time bombast and a lot of cool explosions for 800 points, but the derivative gameplay is too repetitive and too much of a slavish imitation of its ancient arcade inspirations to deliver lasting entertainment.

That said, Shred Nebula is fun for an hour or three, especially if you devoted your misspent youth to plugging quarters into games in smoky arcades while Foreigner blasted in the background. There are only basic concessions to modernity, such as 3D visuals and the 20-mission solo adventure mode of play, which comes complete with a tacked-on story that explains why you're hitting the final frontier with the goal of killing everything in sight. This tale sets you up as the pilot of the RIP Rocket, an experimental spacecraft sent into space to search for the missing Algron Exploration Fleet. The saga is told solely in text blurbs that introduce each mission and give brief explanations about each new alien race that you encounter and why you must murder them. You really don't need to know anything other than that you have to scour enemies from each level, grab power-ups, blast a boss or two, and then fire up your hyperdrive to do it all over again in the solar system down the block.

Other modes of play are more interesting than the campaign. Score Attack is a ladder on which you try to survive as many enemy waves as possible before going kaboom. You can play this mode solo or against a friend on the same Xbox 360. It's preferable to the campaign simply because the challenge is amped up and you don't have to sit through any of the dull story stuff. Online multiplayer supports up to eight players in Deathmatch games. It offers some intense matches, when you can find other players online, but there isn't a whole lot of depth here. No experience points, level advancement, or skill tree is present to hold your interest. So all you do is battle it out in space for bragging rights on the leaderboard when it comes to who has the most game wins, the most frags, and the best TrueSkill rating (a winning percentage calculated from the number of games played and won). There's also split-screen deathmatch play, although the game is so quick and the visuals so clogged with special effects that the action doesn't translate well when confined to just half of a TV screen.

No matter how you play Shred Nebula, though, the design feels very familiar. If you've visited an arcade at any time in the past 25 years, chances are good that you've played one of this game's ancestors. The RIP Rocket and the seven other ship types available in multiplayer are stock-standard crafts in games like this. Each starts off with wimpy single-shot guns but the usual assortment of multiblast cannons, shields, and other powerhouse weapons of mass destruction can be picked up along the way. There isn't anything particularly new here, although each ship features some mildly innovative twists such as the scythe-like RIP saber of the RIP Rocket, the toxic sludge cloud of the GuardBot, and the swarm missiles and cloak of the versatile Djinn. Ship controls are more advanced than in the old days, too. Maneuverability is paramount, and you'll use the trigger buttons to provide thrust and instantly reverse course. There is also a good balance between each ship's special-weapon types and defensive measures such as shields on demand that can bounce projectiles back at enemies. Nothing here is overly complex. You just tear around with one finger keeping the thrust trigger pulled down at all times. You can quickly master all of the controls and whip your ship across the solar systems.

Pace of play is a lot quicker than anything from the golden age of arcades. Levels in both the campaign and score attack are packed with swarming enemies that hammer you with laser blasts. And multiplayer, of course, is a frenzied mash of blasters and explosions, especially in matches with more than four players. However, circling and strafing at full speed is incessant, which makes this white-knuckle dogfighting switch from "exciting" to "okay, this is getting on my nerves" after a half-hour or so, no matter which mode you're playing. The bland design of enemy ships does little to liven things up. In the campaign, you're hit with no more than a couple of enemy types in each level. And these baddies generally stick around for four or five straight levels until you're introduced to another gang of alien goons. Consider this one of those intense yet shallow arcade games best consumed in small bites.

All of this action takes place before gorgeous, layered backdrops of 3D planets, cotton-candy (and often extremely hazardous) nebulae, and floating wreckage. But even though the game is undeniably stunning, there is too much going on. The look leans more toward beauty than functionality. It can be hard to keep your eye on the enemy with so much space junk in the foreground and so many colorful lava planets and suns in the background. Clutter also makes it tough to tell where you can safely fly, given that some asteroids can be blown up and others cannot, and some types of debris can be flown over whereas others just bounce you backward. Later campaign levels make matters even worse by throwing in mazes. Fortunately, the audio is much more effective. Battle effects are tremendously bass-heavy, including a deep, gamepad-rattling boom when your ship blows up. This makes it almost enjoyable to get killed. Music is the usual guitar-heavy lite metal that mars most arcade action games today. At least the tunes are somewhat appropriate here, given the use of the word "shred" in the game's title, and the music never gets in the way of the explosions.

Shred Nebula is too stuck in the past to offer much excitement to the postarcade era. It's an okay diversion for a few hours, although at 800 points there are better bangs for the buck available over Xbox Live.

Editor's Note: This review has been edited for reasons of clarity and to address minor inaccuracies relating to the Score Attack mode. GameSpot regrets the error. 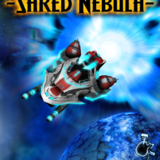