Hmm, a punch to the groin or one more round of this DS boxing game? Hang on, we're still thinking...

Boxing games typically come in two flavors: the cartoon punchfests à la Ready to Rumble and the more realistic Fight Night-esque simulation games. With the release of Showtime Championship Boxing, you can add a new flavor to that list: an ugly mixture of both approaches that results in a fetid stew, heavy on the clunky animations and shoddy gameplay, and light on longevity and fun.

The list of things Championship Boxing gets wrong is a long one, so let's start with the good news. That would be the game's control scheme, specifically the moves that use the directional pad as well as the face and shoulder buttons. Yes, you can punch and block by drawing on the touch screen with your stylus, but the implementation is so imprecise that, as soon as you figure out that you can punch with the shoulder buttons, you'll set aside the stylus once and for all. With the button controls, you can sway left or right with the Y and A buttons, respectively, and block high and low with the X and B buttons. Your punches are regulated by a stamina bar that drains with each punch.

Okay, so the mechanics aren't that bad. However, once you put those controls to use in the ring, it's clear that Championship Boxing falls far short of the mark. You fight from a third-person over-the-shoulder perspective, and the vast majority of the boxing in this game is just you standing in the center of the ring and slugging it out with your opponent, while occasionally swaying left or right just to mix things up. Only in the final fights of a tournament do you need to really move at all, given that the game's artificial intelligence in the early and middle fights is simply brain-dead. The game's manual boasts of a sort of rock-paper-scissors approach to punches, body positioning, and blocking, but for the vast majority of the game, all you really need to do is punch. And punch. And punch.

Here's a fight sequence from a typical round: You and your opponent trade punches in the center of the ring, until one of you eventually backs off and the AI continues its vigorous punching routine, delivering a sound drubbing to whatever air molecules get in the way of his gloves. While your opponent continues to beat empty space senseless, you rear back with a hook (holding down the punch button will give it more impact). Eventually the AI decides to give up its vicious assault on nothing and ambles within your reach, which gives you the perfect opportunity to let loose with your fully loaded hook shot. If you back up a few steps, you can repeat this over and over until your opponent goes down for good.

Though the AI's chin is seemingly magnetically attracted to your boxing gloves, there are few knockouts. In fact, throughout the entirety of the game's miniscule single-player mode, we won every single fight by a TKO. We never cleanly knocked out an opponent, and we also never won (or lost) in a decision. On the other hand, you are not immune from getting laid out occasionally, especially when facing the later opponents in the game. These fellows can seemingly knock you out with a couple of well-placed punches, even if you've already put them on the canvas a few times. To make matters worse, should you lose in the later fights of a tournament, there's no rematch option. Instead, you have to start the entire tournament over again, which is a frustrating design choice to say the least.

None of this feels like boxing, and it certainly doesn't look like boxing, either. The characters themselves aren't so bad when they stand perfectly still; there's some variety to the character design (the Mohawked Psycho Sarge, the glass-jawed Lazy Lorenzo, and so on). However, once the boxers go into motion, things go to pot. Apart from a dreadfully slow pace, each punch, whether delivered to the body or the face, causes your opponent's head to shake as if he were a bobblehead doll. Furthermore, many of the punches you throw aren't even animated; instead, you'll watch as your opponent's head vigorously shakes from the impact of your phantom strike. When a player goes down, it's as if he were hit by an 18-wheeler, even if you sent him to the mat with a jab. Likewise, Championship Boxing doesn't sound like boxing. Even during the King of the Ring mode--the final tournament found in the game--the tame, listless audience makes it sound as if you're punching it out in a moderately crowded Applebee's.

There's no career mode in Championship Boxing. Instead, you make your way through a handful of single-player tournaments with one of the premade boxers in the game. You can't create a boxer from scratch, and there are no training options to improve your boxer as he moves up the ranks. In all, the single-player game--which has both heavyweight and welterweight divisions--won't take you more than around two hours to zip through. There's also wireless multiplayer for two players, both of whom must have a cart of the game to play. Honestly, though, why would you want to subject a friend to this kind of thing?

A fun and frantic boxing game for the Nintendo DS certainly isn't out of the realm of possibility; it just isn't to be found in Showtime Championship Boxing. There are very few things in this game that are worth more than a casual glance, and only then for a chuckle. It just might be the worst boxing game ever made. 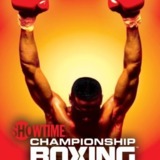