The title sums up Shoot Many Robots, a kill-crazed co-op shooting spree that offers a lot of action for just $10.

Indie developer Demiurge Studios cuts right to the point with the title of Shoot Many Robots. Blowing away mechanical hordes of bad guys is what this simple-yet-addictive actioner for Xbox Live Arcade and the PlayStation Network is all about, so there is no mystery as to what you get. You may not get anything like originality here, but you do get a lot of robot-shooting action for the $10 asking price, along with such amenities as a huge range of weapons and gear, full co-op support in the campaign, and a great sense of humor.

You take on the role of P. Walter Tugnut, an amiable hick who manages to deal with a robot apocalypse just fine until the metal bastards blow up his truck. From that point on, it's war. So you hop into your RV and head off on a kill-crazy expedition to make the walking toasters pay for wrecking your ride. And, uh, for destroying all of humanity. That too.

That's it for the storyline. From there, the gameplay is all about shooting many thousands of robots. The RV serves as a command base where you trick yourself out with various weapons and other gear in the bathroom before hitting up a map by the steering wheel to select a destination. Standard platform carnage ensues. You tromp, stomp, jump, slide, and brawl across well over a dozen levels in the campaign, either solo or with up to three buddies in co-op. Combat plays out from left to right, with you blasting everything that moves with two weapons: a shooter with infinite ammo and a cannon with limited shells. Kills result in leveling up. Dead bots explode into nuts that you collect to buy new weapons and armor. If you kill fast enough, you trigger combos that multiply nut numbers up to five times. Bottles of beer (juice in the oddly alcohol-free PlayStation version of the game, which seems otherwise identical to the Xbox 360 one) are chugged to earn health. Movement is handled with the left stick, while everything else is done with the face and trigger buttons.

Yes, you've seen it all before, but Shoot Many Robots has a certain flair to it. The game has a great sense of humor that isn't confined solely to the hillbilly stuff that could have been abused to beat you over the head with one-liners. Instead, you get a surreal Serious Sam vibe to everything, mostly courtesy of the huge selection of bizarre weapons and gear. Items get progressively more absurd as you go, with Walt soon able to use his nuts to buy automatic weapons like the 110 percent American assault rifle, a blunderbuss, a beer (juice) helmet that lets you hang onto more brewskies (juiceskis?), shiny chaps that increase sliding skill, a Tam o' Shanter hat that boosts damage, and so forth.

Every item is given an appropriately weird description, as well as absurd stats, such as the Scottish hat's supposed ability to increase brogue. Gear greatly customizes what you can do out on the dance floor. You can go for fast shooters or slow blasters, headgear that buffs damage or increases health, a backpack that adds ammo or lets you hover in midair--that sort of thing. Gear can be switched up in dramatic ways to favor a personal playing style.

The action itself doesn't vary much, although there is a blend of all-out speedy insanity and more measured shooting. There are just a few robot types in the game, but they feature enough differences among them to keep things interesting. You have to contend with masses of rushing grunt troops that look like robot scorpions with chainsaws in place of stingers, krush-kill-destroy humanoid bots, charging automatons with armored fronts that demand rear assaults, and a range of gun turrets. Sometimes, you need to hit them hard with concentrated fire; sometimes, you need to sit back and deflect larger turret bullets back at targets with flicks of your wrist; and sometimes, you need to jump all over the place to avoid attacks. Levels come in Standard mode, where you fight to the end and then kill a boss to move on, as well as a Survival mode, where you try to outlast a wave of robots. There is some repetition here, though. Level art is regurgitated a fair bit, as are boss fights like a foundry battle that you go through over and over again, with the only difference being the steady escalation of having to kill more robots.

Shoot Many Robots becomes monotonous with time, but there is a hypnotic quality that sucks you into it. Pulling yourself away may be hard, especially when playing in co-op. The pace is steady; the killing is gratuitous, as well as suitably explosive with loads of boomy sound effects; and the range of weapons along with other goodies are varied enough to keep you going. Just seeing what sort of whacked-out murder device you uncover next has a perverse appeal all of its own. Checkpoints are well placed, saving your progress before big fights without forcing you to repeat tough battles often.

All of the mayhem unfolds before handsome cel-shaded levels with varied, mostly destructible landscapes, such as Walt's rural countryside, a bombed-out city, and a Sonic-like foundry with molten steel or whatever else it might be that flows everywhere. The only visual problem is that the interface gets in the way too often, especially when dealing with flying foes that get lost in the meters and other stats at the top of the screen. Levels also have replay value because you are given a star rating based on the number of nuts collected that is impossible to max out the first time you complete one. Also, you need a certain number of total stars to unlock new levels, which pretty much forces you to backtrack at some point.

It may be mindless and repetitive, but it's still easy to get drawn into Shoot Many Robots. The one-trick gameplay has enough humor and weapon variety to make it a good buy if you're looking to shut your brain down for a while. 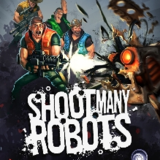 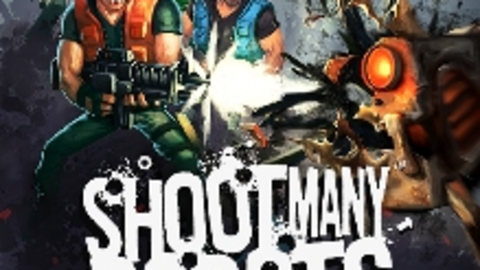 Shoot Many Robots will have multiple players working together to fight through an intense and chaotic robot uprising.