Shining the Holy Ark shows itself to be a strong, if not particularly novel, RPG release.

Shining the Holy Ark is the newest addition to Sega's insanely popular Shining series, and the first game in the series available for the Saturn. It's also the first game in the series that can be defined as a pure RPG (Shining in the Darkness, Shining Force, and Shining Force II were RPG-strategy hybrids). This switch to a new format hasn't hurt the title, and Shining the Holy Ark shows itself to be a strong, if not particularly novel, RPG release (which is something of a novelty in and of itself in this day and age).

You play an adventurous young mercenary named Arthur (or whatever - you get to change his name) who's just starting to build a name for himself. While attempting to capture a renegade for your newest employer, you find yourself pulled into a set of mystical events that starts you off on a long hard road to free the land from a looming evil. If you think that this sounds a lot like the premise of every other Japanese RPG you've ever played, you're right, and the game follows the same basic storyline all the way through - surprise back-stabbing, powerful kings, evil witches, and so on. Still, even if you do know basically what's going to happen, the tale is presented in a pleasing cinematic fashion and doesn't suffer from the plethora translation problems that seem to plague most Japan to US conversions.

The game looks great as well, detailing all the monsters you run into along the way (like every three steps along the way) with crisp 3D-ish animations that move differently depending on what the monster is doing at any given time. While there's nothing here that's as impressive as Final Fantasy VII, it doesn't really matter - this is a pure RPG and revolves a great deal more around plot than special effects. The one sour note here is that at times the animations may be a little bit too detailed. When fighting spell-casting monsters, you'll discover that some of the attack animations can take as long as seven or eight seconds to play out completely. Later in the game, especially when fighting multiple opponents, this can cause your fights to take as long as three or four minutes apiece to play out - a real drag when you're just trying to get back to town. There really should have been an option available that would turn the animations off once you've seen them once. Still, the monsters are (usually - there are a few cases of the same art being used for three or four different monsters) varied and exciting enough to keep this from being a big deal.

Gameplay is excellent and will take you back to such classics as Phantasy Star II and Might and Magic. Walk awhile, kill some monsters, solve a puzzle, kill some monsters, talk to the townsfolk, kill some monsters, and so on. The game is well balanced and provides a fighting challenge without making it impossible to win scenarios (unless you do something really stupid). The puzzles in the game are excellent - brain busting without ever really being too frustrating (a note of warning here: some puzzles may be a little too hard for younger players - I had to break out my second year algebra skills to solve one of them; I guess that class was good for something). Best of all, the design team seems to know when you've had enough time crawling around in the dungeon and does an excellent job of breaking up the game with interesting cutscenes and plot devices.

Shining the Holy Ark also features the same multiplayer format that made the earlier games in the series so much fun, although it's disappointing that new players are just added to your party automatically instead of having to be searched for as in earlier installments. The multiplayer setup lets you keep four players on active fighting detail while keeping a stable of other characters waiting in case something goes wrong. It's not as strategically heavy as the other games (for example, everyone gets experience after every fight – whether they were actually involved in the melee or not), but the multiplayer format does add a flavor to Shining the Holy Ark that isn't available in other RPGs.

There's nothing in Shining the Holy Ark that RPG fans haven't seen in one form or another before, but it does put them all together nicely. If you're looking for a great way to waste some hours (this game is long), this is definitely a game that you should pick up. 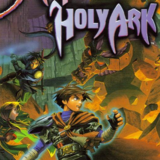