Turn-based strategy games on consoles are old hat by now, but Shining Force on the Sega Genesis was one of the very first (and very few) games of this genre to inch its way out of the formative primordial ooze of the early 1990s. While rather primitive by today's standards, the original featured a huge cast of playable characters and what was then a new brand of tactical gameplay. Now released for the Wii Virtual Console, Shining Force shows its age in presentation and doesn't have much of the crazy complexity console strategies are so fond of these days. But with a roster of 30 recruitable characters and a lengthy adventure that easily lasts 25 hours or more, this retro role-playing game is well worth the 800 Wii points ($8).

The story is set up in classic RPG fashion. One thousand years ago, an evil being known as Dark Dragon was sealed away by the Ancients, an advanced civilization of sages that we can only assume were just waiting around for a chance to banish something hideous to an alternate dimension. Not being the sort of villain to take this lying down, Dark Dragon vowed to return one day to take up his two favorite hobbies: mass destruction and global domination. The predicted time has finally arrived, and the kingdom of Runefaust has launched an unprovoked offensive upon other lands that seems to center around the collection of certain ancient relics. The hero (who is, of course, a talented teenage swordsman) finds that his homeland of Guardiana is one of the first to fall to the advancing armies, and he gathers up a stalwart crew of companions in an attempt to protect other countries and ultimately defeat the forces of Runefaust. While the story itself is fairly cliché, things are kept lively by some surprisingly noble foes and the sheer weight and variety of allies you can win to your cause.

Recruiting people is often just a matter of locating them in one of the game's many fortresses or villages, areas you visit between battle where you can freely roam about and do business. There are plenty of battle-trained mercenaries chilling their heels that are only too eager to join the Shining Force, including elves, dwarves, a werewolf, birdpeople, a little alien you have to hatch from an egg, and altogether too many centaurs. This is one of the few games in existence where you can boast of a fighting party that includes a robot, a dragon, a samurai, and a ninja all at the same time, and the variety is more than skin deep. Flying characters move freely around obstacles like mountains, rivers, and crevasses; centaurs cover large distances over clear terrain; werewolves and elves navigate forests easily; and the stocky warrior types are insanely durable, definitely what you want between enemy forces and your weaker units. You can have up to 12 characters in battle including your hero, so you'll have plenty of opportunity to mix and match your diverse crew.

Battles take place on a range of maps, from numerous outdoor zones, to the more cramped quarters of villages, to ancient temples. Turn order is determined by individual character speed among both enemies and allies. Whenever you attack an enemy (or are attacked), a zoomed-in battle screen shows the action in detail, which is a cool touch. Each character has its own offensive abilities based on equipped weapons and available spells; while some can only attack a foe they are directly next to, many can use spears or bows to attack from range, and others can use magic and healing spells. While lots of battles feature static groups of enemies that attack you only as you come closer, as the game progresses these enemy clusters can be powerful and dangerous, so you'll want to carefully approach and flank them. Many of these maps are simple and the fights aren't particularly demanding in the tactical sense, so much of the time you'll just gradually creep across the terrain, killing whatever's in your path. A few areas have bottlenecks or some surprise spawn points just to mess around with you, and some have tough "boss" characters to defeat. If your group is wiped out, or if your hero is killed, battle ends and you'll be whisked back to the closest town. You lose half your gold, but you can resurrect your friends and keep any experience earned. You can also use the hero's Egress spell to leave the battlefield at any time--the map will reset and you'll be able to start the fight over again, which is useful to boost your team's levels.

Each character earns experience and eventually levels based on the amount of damage or healing they do, as well as the toughness of their enemies. The level cap is 20, but there's a twist--at level 10 you'll have the option to "promote" your character into a stronger form. The new form starts at level one again, but is vastly stronger as a general rule, and as a bonus the character gets a graphical upgrade as well. It's great to see your characters go from simple fighters to fully cloaked and armored badasses as you progress, though some are stronger than others.

Character strength is predetermined, and you'll run into a few characters that are horribly weak just by nature. In some cases, you can overcome early anemia by letting that unit reach level 20 before promoting it, but some of them are just worthless no matter what you do--either they have insanely low health, or can barely move, or do hardly any damage. Healers are also notoriously hard to level, since experience gained from healing spells doesn't amount to much. Fortunately these weaklings are few and far between, and trying to nurture them is completely unnecessary, since there's a steady stream of powerful characters that join you on your travels. You can ditch that wimpy elf archer for a centaur with a shoulder-mounted bazooka and never look back.

This game looks just as it did when it was first released, so while it's a little pixelated and old-fashioned with simple environments and sprites, the colors are vibrant and the in-battle close-ups have a great cartoony look to them. There's not a great deal of musical variety, but all the tunes are catchy and of the sort that sink easily into your subconscious as you ponder where to move your monk. Aside from the very occasional off beat, the sound survives emulation quite nicely.

Shining Force's classic strategy gameplay may not be that complex, but it remains enjoyable through the awesomely crazy variety of its cast and all their attendant abilities, and a story with enough little twists to keep your interest. If you're prepared to sacrifice some tactical depth for the ability to befriend an armadillo in a steam suit or a hamster wearing a giant helmet, definitely give Shining Force a try. 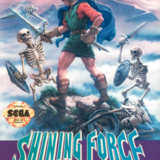 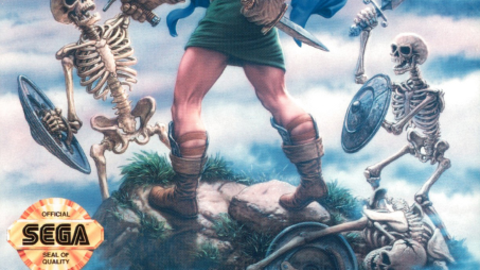