By now, if you've resigned yourself to the fact that the likeliness of seeing Scenario 2 or 3 in English is rather slim, the import route might be worth considering.

Conspicuous by its absence, the Shining Force III series is beginning to look like one of the great 32-bit tragedies. Although American gamers should be glad they got the first installment, in hindsight, the thought of being denied the final two chapters becomes more excruciating by the day. It's like having a carrot dangled in front of your face, knowing full well that you will most likely die hungry.

While there are probably greater crimes in the world than being denied a particular video game, none quite come to mind, now that Shining Force III: Scenario 3 is finally here. In this, the third and final piece of the trilogy, you take the role of Justin, the third main character, who up until this point merely played a supporting role. You lead his team of soldiers and sorcerers through a series of strategic battles that will ultimately reveal the outcome of the war between the Empire and the Republic.

Like the previous two installments, Scenario 3 is played in a linear fashion, although a certain amount of freedom is given to explore your surroundings. Gamers must interact with townsfolk in order to obtain advice regarding upcoming missions and must thoroughly search the environments for hidden items and secret passages. Furthermore, weapons merchants and supply shops must be visited with regularity to ensure your crew is equipped with the most powerful weapons and healing potions.

For those of you familiar with the first game, the third plays exactly the same, with the same exact menu configuration and battle system. The memory-save feature (which affects who is selectable in the second and third scenarios, depending on whom you saved in the first game) works with all three scenarios, meaning that if you choose to import the second two, your game progress from the US version of the first game will still work with the imports.

The soundtrack is largely unchanged, perhaps for consistency, but the game certainly would have benefited from new tracks, as the soundtrack is starting to get tiresome. The graphics also remain basically the same, although the spell effects during battle are more impressive from the get-go, most likely due to the fact that your characters start out at level five.

By now, if you've resigned yourself to the fact that the likeliness of seeing Scenario 2 or 3 in English is rather slim, the import route might be worth considering. Although you won't be able to follow the storyline so well, the combat is where it's at. The third scenario features nifty little cinematics in between some battles that the original didn't feature, and seeing as how the whole interface is the same, this would be a great game to import. The gameplay is as good as it ever was, and that's the most important thing. 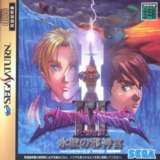