If you like strategy RPGs, do yourself a favor and pick up Shining Force III Part 2.

Fans of strategy RPGs have long held Sega's Shining Force series as one of the premier examples of the genre, and it's highly regarded by some as the pinnacle of strategy gaming. RPG fans longed for Sega to create a new episode for the Saturn; nevertheless, it came as quite a shock when Sega of Japan announced last year that it would be releasing not one, but three new Shining Force games over the course of the following year. Shining Force III was to be released as a three-part series, with a new chapter arriving, roughly, every three months. Each one would stand alone as a game, but the full experience would only be gained by playing each chapter in full.

Unfortunately for Shining Force fans living right here in the States, the Saturn took an untimely dive in sales and support, just when the Saturn's best games were coming out. It was speculated that they would likely only receive the first installment. The good news, however, is that the rest of the series plays just like the first, enabling fans of the series a fair shot at completing the remaining two games. Of course they won't be translated, but the Shining Force series has always been about the combat, and in Shining Force III Part 2, there is combat aplenty.

Taking place in the exact same time frame as the first chapter, Part 2 focuses on the game as viewed through the perspective of a completely different group of warriors. In the beginning of your quest you'll find yourself in situations remarkably similar to the ones experienced in the first chapter. That's because they are the same events that happened in the first chapter. Only this time, your newly formed group takes a different course of action, even though the situations are linked. To make it easy to comprehend, it's like playing the good guys in part one, and then you get to play the role of the bad guys in part two, although the differences in the two chapters aren't that cut and dry. In Shining Force III, there's a civil war brewing, and no one is sure what's going on. Different factions take up arms to try to find out who is at the bottom of all this turmoil, and over the course of the three chapters, the plot will eventually be revealed. Provided you have completed the first part, the memory save and characters you've gained from SFIII-Part 1 will affect the events that transpire in Part 2.

So what's the difference aside from the storyline in Part 2? Not very much, and that's a good thing. In Shining Force III, you maneuver your party around a completely 3D world. Towns, battlefields, dungeons, etc. are all rendered in full polygonal detail. Characters are rendered as sprites a la Shining The Holy Ark, which isn't surprising as the designers of that game also did this series. Menus, as well, are almost exactly the same as those found in Shining The Holy Ark, so veterans of that game should have no problem getting adjusted to the Shining Force interface. Once you've done your scouting around and eventually find yourself in a skirmish, that's where the genius of the game engine makes itself apparent. By utilizing theSaturn's powerful Yamaha sound chip to process and funnel additional information simultaneously with the VDP1 and VDP2 processors, Camelot has managed to reduce loading times to practically nothing, which is impressive when you see the battle scenes in motion. Each character is usually represented by a superdeformed little sprite in the world map, but once you engage in combat, the character is then rendered completely in polygons. While they don't look as good as Virtua Fighter 2, they are still stunning tobehold. Fully light-sourced and Gouraud-shaded, these characters come to life complete with flashy spells and powerful attacks. Improvements to the battle engine in Part 2 include better light sourcing, better-looking spell effects, and other little details, such as beams of light surrounding your character as he levels up. As far as the regular game environment is concerned, texture variety has also been increased, giving each town a more convincing look. Far too often in the first chapter, every building looked exactly the same, sometimes making it confusing to make your way to places you hadn't seen yet. Aesthetics aside, there was very little that needed improvement from the first game. After all, this is merely the second chapter in a trilogy, so there wasn't a need for radical changes. Camelot had already achieved a remarkably efficient game engine. The point here was to continue the story.

As it is, each chapter provides somewhere in the neighborhood of 25-30 hours of gameplay, each loaded with increasingly complex strategic dilemmas. For gamers who choose to go the entire distance, you're looking at 75-90 hours of strategy gaming by the time the story's complete - a good amount of gaming at any rate. So if you can get past the fact that you won't be able to follow the storyline (at least those of you who don't read Japanese) there's a great deal of addictive game-playing to be had. Everything is left practically untouched from the first round, making it a snap to jump right in to what is probably the best strategy series to come around in a long time, Vandal Hearts and Final Fantasy Tactics notwithstanding. In addition to the numerous battlefield encounters, Shining Force III Part 2 is far more interactive than the average strategy/RPG. Your characters will need to thoroughly explore each village and talk to all the townspeople in order to progress and find hidden characters. Additionally, you'll also need to buy and equip the necessary weapons and items if you want to be successful on the battlefield. Considering each character has only four inventory slots, item management is key to survival.

Unfortunately, with the state of the Saturn as it is, the chances of us seeing the last two chapters stateside grow slimmer by the day. Gamers can only hope the success of Panzer Dragoon Saga might encourage SOA to bring out the last two installments for release here. However, in the event that Sega doesn't, at least there are the import versions to investigate and enjoy. If you like strategy RPGs, do yourself a favor and pick up Shining Force III Part 2. It's not everyday a series like this comes along. 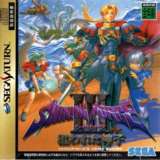