Since its inception, the Megami Tensei franchise has weaved elements of science fiction with fantasy stories to craft rich worlds steeped in the occult. With the release of Shin Megami Tensei: Strange Journey, developer Atlus has taken a slightly different approach with a story that is much more focused on science fiction than previous entries. Despite this shift in direction, however, Strange Journey is still a game firmly entrenched in the past. Longtime Megami Tensei devotees may be thankful for its return to the first-person dungeon-crawling roots of the series, but those expecting this to live up to the superb Persona 4 or Devil Survivor will be disappointed with the outdated gameplay, straightforward combat, and boring exploration of Strange Journey.

At the tip of the South Pole, a mysterious black spot that consumes everything within its boundaries has appeared. This spot, dubbed the Schwarzwelt, is observed to be expanding uncontrollably; thus, a multinational team of soldiers and scientists armed with the latest weapons and technology have been sent in to find a way to stop it. After crossing through the threshold, you learn that the Schwarzwelt is actually the gateway to a world of gods and devils fed up with the human race. After an accident traps you inside with demons who endlessly expound on how mankind has squandered and abused their planet without a shred of subtlety, it's up to you and your ship's crew to save the world and escape.

As an American soldier, you spend most of your time securing the various sectors that are found within the Schwarzwelt; each of them a twisted facet of the human world. Gameplay consists primarily of first-person exploration through these mazelike areas which, over time, become increasingly complex. They are also booby-trapped with pitfalls, moving floors, damage tiles, and the like. To survive the bland, repetitive, and presumably harsh environments in the Schwarzwelt, you're equipped with a suit of demonica armor. This set of prototype combat gear automatically maps your movements, and helps you uncover hidden passages, enemies, and items through various subapplications you install. Though the demonica proves invaluable, even with all of its utility, you still often find yourself wandering around aimlessly. There are times when your map does not show you where to go next and your list of objectives doesn't clearly communicate what to do, and so you have no choice but to stumble around looking for hidden passageways or the next story event. This is particularly frustrating if you return to the game after a break and forget where you are.

One area where your demonica does excel, however, is in facilitating interactions with the resident demons of the Schwarzwelt, whether they are violent clashes or philosophical debates. Depending on your equipment, you have a variety of attacks at your disposal to dispatch your enemies, but things don't always have to go down that way--some demons are open to talk. The demon negotiation system--most recently seen in Shin Megami Tensei: Persona on the PSP--has returned once more, allowing you to bribe, wheedle, or scare adversaries into becoming allies. Though this gameplay mechanic was fresh and innovative when it was first introduced well over a decade ago, it's no longer particularly exciting to figure out which of the multiple choice responses you're given will gain a demon's support or its ire. The system hasn't significantly changed in recent years, and dealing with demons in such a passive manner is neither engaging nor intriguing.

Regardless, successfully drafting demon allies means you can summon up to three of them to fight alongside you against their hostile neighbors in the turn-based combat system. Each demon has their own strengths and weaknesses, and so it's necessary to constantly tweak your party to ensure the optimal team depending on the situation. Demons aren't only meant for fighting, though--your recruits can also be fused together to create new, more powerful allies and to pass on special skills and abilities. You can even share your creations with your friends by trading passwords.

Strange Journey features a wide variety of demons to fight, recruit, and customize through fusion, each of which has its own meticulous artwork and animations (though some are reused from previous Megami Tensei games). Likewise, dungeon tile and texture art is highly detailed, though it unfortunately loses its luster due to the repetitive nature of the dungeon-crawling action. Veteran series maestro Shoji Meguro returns to score Strange Journey, and like other aspects of the game, his compositions shift slightly away from the norm to fit the sci-fi plot and settings quite well.

Shin Megami Tensei: Strange Journey may be the latest entry in the venerable franchise, but its outdated demon negotiation system and tedious dungeon-crawling action might have you think otherwise. Longtime series fans will no doubt appreciate its return to form for the dozens of hours its appropriately dark story will occupy them, but neophytes--especially those expecting something similar to games like Persona 4--are better off staying away. 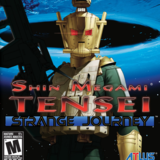