Shin Megami Tensei: Persona 3 Portable is the third iteration of the highly popular PlayStation 2 role-playing game, Persona 3. It's just as enjoyable but now includes a female protagonist for a fresh perspective, along with new story aspects. It's also been successfully streamlined for greater convenience, finally allowing you to assume direct control of party members. Barring a degree of repetitiveness, P3P is a robust adventure that is especially well suited for series newcomers.

The macabre, rich story begins by unveiling the Dark Hour, which is when a towering dungeon called Tartarus appears and releases vile shadow monsters. You're cast as a high school student fighting alongside friends to destroy the shadow menace, relying on the power of persona--ancient beings that represent the many facets of the soul. In addition to offering the original male character, P3P introduces a new female lead that implements eight new friendship bonds called social links. Social links are interesting side stories, often surprising you with exciting twists that add to the main plot's intensity. The new social links alter your dating options and let you learn more intriguing details about the males in the main cast, which should appeal to P3 veterans. Deepening your friendship bonds--perhaps even falling in love--increases your ability to summon stronger persona, giving you a decisive edge.

Dungeon exploration suffers from an outdated maze mechanic and excessive backtracking. Tartarus is segmented into blocks, each containing numerous floors that operate as random mazes littered with shadows. You're given little to break up the monotonous exploration aside from the occasional boss and a change in textures. New rescue missions attempt to spice up the labyrinth, but they're overly simplistic, involving little more than searching a set range of floors to locate a missing person. Quests are somewhat challenging but repetitive, often requiring that you backtrack through previous floors to find items or defeat specific foes. Fortunately, you can now use the main entrance to continue exploring from the floor you left off of, so you won't have to teleport to a previously completed block and work your way back up to where you were--a long-awaited adjustment.

The sheer volume of persona and unique abilities keep the combat interesting. While your teammates are limited to summoning a single persona, you're able to carry up to 12 simultaneously. Each persona and enemy specializes in an attack type, such as fire or slash, while also harboring weaknesses. The goal is to exploit an enemy's weakness, knocking it off balance so your team can perform a devastating group attack, which encourages strategic planning. A helpful "analyze" ability lets you determine a foe's weakness without entering the menu system, which speeds up battles. The new cooperative techniques enable you and an ally to perform a powerful critical attack that knocks a sole standing enemy off-balance, making it much easier to trigger group attacks.

A variety of tactical options help you manage your team in tough situations. You can issue specific instructions for teammates, or, for the first time in P3, you can seize direct control of your allies. This handy adjustment is the game's most welcome change, as advantageous bosses use status ailments such as charm to turn your own attacks against you, increasing your need to assume direct command. Though enemies are clever, many standard battles devolve into routine elemental casting to capitalize on an enemy's weakness; fortunately, a lightning-fast autobattle option serves to lessen any repetitiveness.

The game's greatest highlight has to do with its robust customization, which allows you to develop the ultimate persona team. You're able to modify persona by leveling them to acquire new abilities or by fusing them together to unlock new persona, passing along inherited skills they wouldn't otherwise learn. There are roughly 170 persona, including four new creatures for a minor roster boost that have numerous abilities with which to experiment. New skill cards let you teach a persona a specific ability without fusing, which makes the process easier without undermining its addictive qualities. Additionally, you can fuse your strongest persona into unique weaponry to craft elite gear, which is quite satisfying.

A variety of modifications increase ease of play. A greater spectrum of difficulty modes ups both the comfort level and challenge, so you can play casually or face off against ruthless shadows in Maniac mode. You're now able to manage the team's equipment from within the same menu, which is a huge improvement upon Persona 3's system, which forced you to speak with teammates individually to initiate gear swaps. Various shops perform more functionally by increasing your social status, such as your charm level, which can help unlock social links. A few even allow you to work part time, so it's much easier to score cash. Finally, a data install option noticeably shortens loading times and quickens combat animations.

The game boasts a stylish and smart exterior. Clean static backdrops replace the crude 3D environments of its predecessors, allowing for intuitive fast travel that lets you quickly maneuver without scrolling through the map. Detailed character portraits express a variety of emotions during naturally voiced dialogue. Character models move fluidly and register pretty closely with their console counterparts but are slightly rough around the edges. The soundtrack includes 10 new songs, and while most are hit or miss, they're upbeat and suit the game's ambiance. Regrettably, the animated cutscenes have been dropped because of storage issues, but their absence doesn't mar the experience.

You can spend upward of 90 hours fleshing out social links and fusing persona, as both are highly addictive and expansive; a second play-through is practically required to unlock all content. A new paradigm door allows you to defeat previous bosses that now fight with greater ferocity, all for satisfying rewards. A bonus dungeon houses the strongest foes, drastically shortening leveling time so you can quickly strengthen persona, but it operates so similarly to Tartarus that it feels like an afterthought.

Persona 3 holds up remarkably well in this rendition, tweaking everything from basic combat mechanics to menus in order to create a more player-friendly experience. It provides a wealth of personas and great replayability, and the somewhat repetitive dungeon-crawling is easily overshadowed by the vast array of persona abilities. New dialogue and entertaining dating opportunities also entice, as unraveling the extensive new social links freshens the story. Despite minor shortcomings, Persona 3 Portable remains an enthralling and rewarding journey. 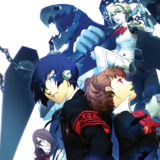