This fantastic hybrid role-playing game will pull you in with its thrilling story and keep you coming back for more.

The long-running Megami Tensei franchise has seen many incarnations, from the stylish detective adventures of Raidou Kuzunoha to the school-sim-slash-dungeon-crawlers action of the recent Persona games. Shin Megami Tensei: Devil Survivor, the latest game in the stygian series, is, like many of its predecessors, an odd concoction of mechanisms from a variety of genres. But despite the seemingly disparate styles of gameplay it contains, Devil Survivor is a superb role-playing experience with a surprisingly mutable storyline that hardened veterans and series neophytes alike can enjoy.

In the midst of a hot Tokyo summer, the city is plunged into chaos when a series of mysterious accidents force the government to lock everything down under quarantine. With the military preventing any entry or exit, the people trapped inside are left defenseless against the demonic forces that have begun to run rampant--all except for you. Armed with customized portable computers called COMPs received from your reclusive hacker cousin, you and your friends have gained the ability to summon demons of your own. But even with your newfound powers, escaping Tokyo and surviving what may be the end of the world are going to take time--time that you don't have much of.

You see, time in Devil Survivor is a harsh mistress that waits for no one. With utter catastrophe rumored to strike in seven days, you'll be investigating the various districts of Tokyo for possible escape routes all while trying to find ways to keep your life from being cut even shorter. Exploration is performed from a map screen menu, and you can easily chat up the locals, take a peek around, or ask your party members for input at almost any time. Though there are usually a number of potential areas to check out, story missions and battles are clearly labeled, which ensures you always know where to go next at the unfortunate cost of making every other area completely useless. It's important to prioritize your schedule, as each mission activated costs a half hour of your day, and some are available only within a certain window of opportunity. Devil Survivor does a good job of easing you into this system, but by the second day you'll have to make some hard decisions about which of the disparate storylines you want to follow. Not to go into too much detail to avoid spoilers, but your actions will not only affect which of the many endings are available to you, but a number of other powerful life and death moments along the way.

Battles play a huge part in Devil Survivor, and thanks to a unique hybrid combat system, they're both fun and highly strategic. In typical tactical role-playing-game fashion, your party of up to four characters--each supported by two summoned demons--alternately takes turns with your enemies at maneuvering around on an isometric grid. Once you're within range, you attack your foes in a first-person perspective a la Dragon Quest, where you input your actions through a menu and watch how they pan out. Demons are vulnerable to certain types of attacks depending on their type, and by exploiting these weaknesses or scoring a critical hit, you're able to follow up your initial assault with a second round.

When not actively engaging your foes, you can scout out their weaknesses to better plan your attacks, and if a battle goes south, healing spells can be cast and lost allies can be revived or replaced with benchwarmers on the fly. Though many of your battles will have the straightforward goal of eliminating all of your enemies, mission objectives have a surprising amount of variety. You'll also find yourself defending specific targets, preventing enemies from escaping, escorting civilians to safety, fighting bosses, and more. Mission lengths aren't too egregious for a portable experience, but if you do find yourself short on time, you can save mid-battle at nearly any time to continue later on.

Devil Survivor boasts an impressive amount of character customization, and if you ever have difficulty with a particular mission, you can always redistribute your abilities to try a different angle. As you progress through the game, you will battle new types of demons and add their powers to your skill list, which you can then assign out to any of your human characters. Skills fall into three categories--commands that can be used on the field or during combat, passive abilities that are always active, and those that are automatically activated at the start of a battle--and while up to seven can be distributed per character, you can't assign out the same one twice. Each character's stats grow differently as they level up, making them more or less effective at certain types of attacks, so it's important to make sure that their squad of demons compliments their style of combat.

From the city map, you're able to spend your hard-earned macca (the currency of the netherworld) on new servants through the Devil Auction system by bidding on their services or buying them outright. Demons level up alongside their masters in combat, but to truly unlock their potential you've got to fuse them together to create even more powerful netherworld denizens. Optimizing your army is a fun and addictive way to pass the time, and it's never been simpler thanks to a searchable fusion database that cuts chance out of the equation entirely. Furthermore, by fusing demons you can elect to pass on more desirable skills to the product of your experiments. By effectively pairing up demons with demon tamers, you can create powerhouse teams to thrash your enemies.

Fans of the Shin Megami Tensei series who have come to expect top-notch presentation in its games will no doubt be pleased with what they see and hear in Devil Survivor. The artwork is stylish and full of personality, and though some of the demons will be familiar to the Atlus faithful, there are plenty of new ones to spice things up. Character sprites are well animated, breathing a surprising amount of life into their pixels, and the battlefields do a fantastic job of showing a slowly decaying city as it falls apart. The J-rock music style that infuses Devil Survivor's soundtrack further emphasizes this sense of crawling chaos with its gritty, urban sound, and it helps to add a great deal of atmosphere to the battles and storytelling. It's a pity that there isn't any voice acting to further complement the adventure.

Shin Megami Tensei: Devil Survivor is a thoroughly enjoyable role-playing game with a ton of atmosphere and style. By streamlining many of the series' trademark features and making them more accessible, Atlus has crafted a gameplay experience that longtime fans and relative newcomers alike can enjoy; by weaving multiple subplots into the overall narrative that can't all be explored in a single play-through, they've left plenty to do on subsequent replays. If you're looking for a riveting portable adventure, then look no further: Devil Survivor will take over your life and leave you begging for more. 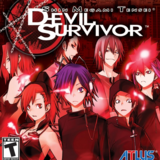