If Sir Arthur Conan Doyle and H.P. Lovecraft had ever collaborated on a novel, the duo might have come up with a spooky saga a lot like Sherlock Holmes: The Awakened. This adventure, the third in Frogwares Game Development Company's series featuring the protagonist of such classic mysteries as The Hound of the Baskervilles and The Sign of Four, pits the deerstalker-wearing detective against the horrors of the Cthulhu mythos. While that combination may sound more like fan-fiction cheese than a pulp-fiction dream team, the tale here is told brilliantly, and the adventure mechanics are as faultlessly logical as the legendary sleuth himself.

That doesn't mean that the game is easy. On the contrary, Holmes and his sidekick, Dr. Watson, have to be extremely careful and observant to stop cultists from setting off Cthulhu's alarm clock. The big difference between The Awakened and the average adventure with its walk-through-prompting leaps of stupidity is that you can figure out all of the challenges that come your way if you approach them as Holmes himself. This means that you need to closely examine your surroundings, keeping an eye out for footprints, scraps of cloth, bits of fiber, and other nearly imperceptible clues that can help you unravel the mystery. In fact, this mystery begins with a missing servant and turns into a globe-spanning investigation into (cue Lovecraftian purple prose) indescribable eldritch horrors from beyond time and space!

However, the game isn't a tedious pixel hunt. If you scan all of the backdrops with Holmes' or Watson's practiced eyes, you'll spot important items almost immediately. Such key areas as desks and shelves can also usually be zoomed in on, so you know when something needs a look-see with Holmes' trusty magnifying glass. There is a great sense of consistency and internal logic at work here that keeps you on the right path as long as you scrutinize everything in sight. You are also presented with the odd bit of old-fashioned adventure-game goofiness. At one point, you McGyver together a blowgun out of a pipe and a hypodermic syringe, but much of the time, it feels like you're a real detective running down leads and collecting clues.

Yet simply observing everything and slapping together makeshift weapons won't prevent cultists from summoning Cthulhu. There are a lot of puzzles to solve during the course of the game, including a couple of combination door locks, a devilish clock conundrum that must be solved to open a safe, a few extraordinarily tough ciphers, and even one challenge to draw the bloody pentagram that serves as the sign of Lovecraft's Great Old Ones. Holmes must also take evidence back to labs (both in his famous flat at 221 B Baker St. and elsewhere) and examine it under a microscope or cook it up with other solvents in a mechanical contraption to separate the elements. Some of this can be a little finicky. Sometimes you have to use a scalpel or tweezers just right on a piece of evidence slabbed under the microscope. Hot spots in the game can occasionally be a touch tricky to activate as well. Still, the hands-on feel of these various challenges more than makes up for a few minor technical issues.

Visual presentation also makes it seem as if The Awakened is right at your fingertips. Unlike the traditional third-person adventure or stutter-step Myst clone, this game is depicted in first-person shooter style. You look through the eyes of Holmes or Watson and have complete range of movement in full 3D environments that are attractive and atmospheric. The story also takes you all over the globe, so you get to sleuth your way from London to Germany to New Orleans and back again. Some of the background scenery is a bit flat, although the characters are beautifully drawn and loaded with such detail that you can see the pores and 5 o'clock shadow on Watson's face. Lifeless street scenes are all that interfere with the illusion of stepping into the 19th century. For example, Holmes' neighborhood in London is practically deserted in the middle of the day; the only citizens in sight are a newsboy member of the Baker St. Irregulars, a hansom cabdriver, and a woman selling flowers. This sure isn't the bustling capital of the Victorian world brought to life in Doyle's short stories.

Audio is straight out of the BBC. Although the acting and dialogue are unsurprisingly more workmanlike than the fantastic Sherlock Holmes TV adaptations from the early '90s starring Jeremy Brett, everything remains entirely believable. However, some of the cutscenes are rather wordy, and there isn't any way to skip them or even fast-forward through specific lines. In some ways, this actually adds to the gameplay because it forces you to concentrate on every word spoken, much like the obsessive Holmes would have--or not. Holmes is awfully talky and obnoxious a lot of the time, so there are moments when you long for the ability to just hit the escape button to shut him up. The soundtrack is also sufficiently ominous and worthy of a TV show or movie. Unfortunately, slight audio clipping mars the main score on the menu screen and during level loads.

Both true to the character of Sherlock Holmes and a rip-roaring pulp adventure in its own right, The Awakened is a must-play game. Mystery lovers with a taste for the supernatural will feel right at home with this slice of Cthulhu-infused Victoriana. 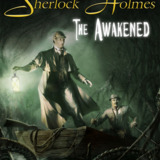