Frogwares' Sherlock Holmes franchise has quietly become one of the best names in adventure gaming. The games based on Sir Arthur Conan Doyle's legendary sleuth and his sidekick Dr. John Watson have been steadily getting better for a decade now, continually building on top of the Mesozoic point-and-click mechanics and visuals of early releases. Sherlock Holmes: Crimes & Punishments takes the series to a new level when it comes to game mechanics, storytelling, and visuals. Rigorous detective work and an affinity for the unique Sherlockian atmosphere do everything but put a deerstalker on your head and a magnifying glass in your hand.

Story structure veers away from the single cases featured in previous games in the series. Crimes & Punishments lives up to its name with six separate investigations in which Holmes and Watson scrounge through clues to bring villains to justice. Foreshadowing regarding a gang of terrorists called the Merry Men is sprinkled through the entire game, although there are otherwise no linked elements, aside from brief clips such as one in which Mycroft Holmes shows up to lecture his brother about this insidious gang. As a fan of the original Doyle tales, I greatly appreciated this approach--especially given how the storytelling, characterizations, settings, and incidental references absolutely nailed down the atmosphere of the Sherlock Holmes world.

Each of the cases lasts a good few hours, so the episodic format never gets in the way of digging your teeth into each story. I never felt rushed, and in fact, each case feels like a full standalone game, to the point where I was continually surprised when I finished one and was immediately thrust into another. The game certainly provides great value for your money. There is a good range of subjects as well. Crimes range from a fairly straightforward murder with a whaling harpoon, to a vanishing train in the English countryside, to a ritualistic killing in Roman baths. None of the cases are paritcularly fanciful, though, which might be a disappointment if you're hoping for something supernatural, like the Cthulhu case in The Awakened, or something splashy, such as Sherlock Holmes Versus Jack the Ripper.

Each case also delves into Holmes' investigative methods and conclusions. New dimensions have been added to the basic mechanics, which still revolve around sleuthing your way through crime scenes, collecting evidence, and interrogating suspects and witnesses. A Sherlock Talent camera serves as bullet time for detective work, slowing events down so you can take a closer look at evidence. Imagination mode lets you visualize what may have happened during the crime in question. Character interrogations now feature full profiles in which time stops while Sherlock runs his eyes over every aspect of a person's appearance and clothing. (Mud on his sleeves? Could he be a gardener?) And the revised deduction screen (once a bulletin board at 221b Baker Street) now features glowing brain neurons and synapses that show how linking evidence like "Feat of Strength" and "Possible Conspiracy" can spark together and lead to a conclusion like "Two Murderers."

Crimes range from a fairly straightforward murder with a whaling harpoon, to a vanishing train in the English countryside, to a ritualistic killing in Roman baths.

All of these features take you into Holmes' head, which adds to the atmosphere and firms up the feeling that you're solving crimes purely through logic. Investigations can be too rigorous, however, in that you always have to fully complete tasks before the game allows you to move on to new areas and new evidence. For example, at one point I had to examine the inner inscription on a gold ring. I rotated it around and read the complete inscription in seconds, but this wasn't good enough for the game. I had to spin the ring around slowly and allow Sherlock to read the inscription aloud and in full before I could move on to my next task. This sort of thing happens often, making you feel as though you are stuck even when you aren't.

The new deduction screen looks rather space-age for this Victorian setting, as if it were dropped in from another game entirely. That said, the screen works well at expanding on Holmes' deductions, allowing you to connect evidence together in numerous ways that lead to numerous conclusions. A lot of this evidence is somewhat tenuous and circumstantial, too, and it frequently points fairly reasonably in different directions at once. You must be very exacting unless you want to accuse the wrong suspect.

Conclusions have been opened up, and moral choices are available in which you serve as an impromptu judge in addition to determining whodunit. In addition to finding the killer or killers, you also rationalize why the crime was committed and select between condemnation or absolution. Generally, the choice comes down to giving the bad guy a break based on mitigating factors, or handing him over to Lestrade and the boys at Scotland Yard. The game even provides feedback on how well you chose: a score rates your abilities, and at the start of the next case, you can review newspaper stories (Hmm, the guy you just absolved wound up committing suicide over his guilt) or correspondence (A thank-you letter from a reforming killer on the road to returning to society? How nice!). You can also go back and reinvestigate cases and their concluding moral choices, which provides the game with significant replay value. This moral theme is developed through the entire game, and provides a fitting ethical dimension to everything that Holmes does. There are also links to Dostoevsky's Crime and Punishment (seen being read by Holmes during some loading scenes, just in case the title of the game wasn't blatant enough a reference), which allows Holmes to pontificate about how he serves the truth, not the justice system.

Character interrogations now feature full profiles in which time stops while Sherlock runs his eyes over every aspect of a person's appearance and clothing.

Action sequences and puzzles fill out the remainder of the tasks on Sherlock's to-do list in Crimes & Punishments. Cases are loaded with challenges and conundrums like having to win an arm-wrestling duel, mentally assemble images in Holmes' mind, pop open cylindrical locks, use the analysis table at 221b to blend chemicals and reveal hidden message, and so forth. Many can be tough to get through, so thankfully there is always an option to skip through to success and get back to the more traditional adventure portions. Holmes also has to play dress-up and put on various costumes and facial makeup to deal with certain suspects and situations.

Speaking of traditional adventure games, Crimes & Punishments looks nothing like the average game in this generally dated genre. While the previous Sherlock game in the series, The Testament of Sherlock Holmes, looked pretty sharp, this successor raises the bar even higher. Characters and environments are sharp and beautiful, even when character models come close to crossing into the uncanny valley with their lifelike faces and expressions. I found myself staring intently at suspects and witnesses during interrogations, trying to look through their eyes and see the truth. That deepened my connection to Holmes, as if I were truly taking on the role of the legendary detective. Scripts and voice acting are every bit the equal of the visuals. Nothing here would be out of the ordinary in a first-class cinematic Holmes adventure.

All of this new technology comes with a cost, though. Loading times are lengthy and frequent. Every time you move to a new location--and you do so often, as investigations in each case take you to many places, some that you visit repeatedly--the game drops to a loading scene of Holmes sitting in a horse-drawn cab, either smoking or reading a book, and remains there for 20-30 seconds. I wished I had a book on many occasions, too, especially when I had to endure these rides numerous times in no more than a few minutes as I was scurrying from one location to another following up leads.

Perhaps the best comment that I can make on the half-dozen cases featured in Sherlock Holmes: Crimes & Punishments is that they feel like lost short stories from Sir Arthur Conan Doyle himself. The whodunits are fascinating, with odd casts of characters and plausible mysteries that blend elements of the police procedural with the quirky and eerie atmosphere unique to Holmes and Watson. Nothing really beats curling up with the Doyle's original tales about blue carbuncles, spectral hounds, and Bohemian scandals, but this game is about as close as you could ever get. You don't have to be Sherlock Holmes to deduce that this is one of the best adventures of the year, or that the game is continuing to make a good case that this series needs to be recognized as one of the best adventure franchises of all time. 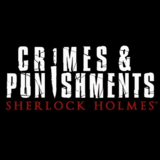 Brett Todd repeated "Elementary, my dear Watson" over and over to himself through the 20+ hours he spent playing Sherlock Holmes: Crimes & Punishments.