ShellShock 2: Blood Trails spices up Vietnam with a liberal application of zombies, but it does nothing to liven up the generic shooter gameplay.

Vietnam shooters apparently need more than just Charlie creeping through the jungle these days. ShellShock 2: Blood Trails takes a sharp left turn away from its gritty, realistic 2004 predecessor, ShellShock: Nam '67, and throws zombie hordes into the expected mix of AK-47s and rice paddies. Combining horror with stereotypical first-person shooter combat does little to make the game stand apart from the crowd, however. While there are a few thrills and chills here, this is too much of a shooter-by-numbers to be engaging to anyone but the least discriminating twitch gamer.

The plot introduces ravenous zombies into what is otherwise a standard Vietnam War movie storyline about a kid experiencing the horrors of war for the first time. If you tossed Platoon and 28 Days Later into a blender, this is pretty much what you would get. You play as Nate Walker, a raw recruit who touches down in country and is immediately shipped off to a border base under siege by the Vietcong (cue the usual angst about war being hell). But then the game shifts suddenly from one stereotype into another, with Walker being introduced to his zombie brother, Cal. As you might expect, this isn't much of a family reunion. Just as you're coming to terms with a brain-chomping bro who won't be interested in eating turkey on Thanksgiving anymore, the VC crash the party. Your brother escapes, and soon you're running through the jungle to battle the zombie plague and figure out what the mysterious Whiteknight is before the godless Commies do.

Sound like a decent basis for a shooter? It is, and the Source-engine-based visuals are reasonably good, though a long way from something modern like Crysis. The level design is attractive too, even if it seems like you're running from one Vietnam movie set to another. One moment you're racing through a misty jungle, then you're dealing with booby-trapped VC tunnels, and then you're in a run-down village. You get the picture. At least much of the scenery is chilling. Bloody streaks (trails?) are everywhere, and it seems like you can't walk two feet without encountering a beheaded soldier mounted on a wall, a buddy with his legs blown off, or some poor guy impaled on a bunch of bamboo spikes. The audio is serviceable. M-16 and AK-47 fire sounds like it should, although there isn't any thump to the rat-a-tat-tat or explosions. Most of the voice acting is well done, at least by B-movie standards. The actor playing Walker sounds a lot like a young James Woods, which adds a bit of Hollywood class to the proceedings.

But there isn't much game here. ShellShock 2: Blood Trails is very short. The solo campaign can be blasted through in four or five hours, and there are no multiplayer modes, so when you're done, you're done. Replay value is nonexistent due to the simplistic nature of the level design. Actually, "design" is probably too strong a word for how these levels have been slapped together. There isn't any artistry here. Every level is a straight run from point A to point B, with pauses along the way at choke points where you have to hunker down for a few minutes and gun down respawning enemies. Basically, you run along until you meet up with a bunch of fellow Yanks, then you stand still and help them shoot the horde of VC and/or zombie wannabes that start spawning from nearby rooftops, jungle pathways, and the like. Enemies never give any thought to what they're doing and typically just run out of their spawn locations like clowns out of a funny car. You can simply line up these spots in your sights and blast away at the respawning bad guys until the showdown ends and the game tells you to get moving.

About the only intriguing aspect of combat is a minigame that pops up whenever you get into close combat or you trigger something like a VC booby trap. If you encounter one of these situations, the game surprises you with a quickie challenge where you need to quickly hit a a number of specific keys to avoid certain death. For instance, to avoid a zombie's clutches and give him a beating, you might need to press W-S-A, then A-S-D, and then W-A-D. As the game progresses, you have less time to input these combos. In the early levels, you can almost leisurely type in the letters requested, while later you have to key them in almost instantly or wind up perforated by something like a VC spike pit. These moments are kind of intense and often serve to underline startling moments like a zombie lurching out of a darkened corner. But they also tend to be few and far between, especially in comparison to the mundane run-and-gun combat.

Chances are good that you won't hate ShellShock 2: Blood Trails. But odds are also high that you won't particularly enjoy it, either, and will likely forget playing the game in less time than it took to blast your way to its conclusion. Even if you're interested in the Vietnam War and have a zombie fetish, you can likely find a better use for your $30. 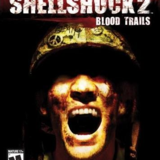