Sheep offers a lot of bang for your puzzle-game buck.

Sheep aren't just cuddly, docile creatures put on this earth to provide us with wool and something to count during periods of insomnia. No, sheep are actually the descendants of a race of space-faring explorers, who originally came to our lowly little orb to examine our societies and customs. However, all the grazing and wonderful sunshine made them forget their mission, and they somehow became slowly domesticated. But now, the ancestors of our sheep are here to rescue their wayward sons from the evil mad-scientist Mr. Pear, who plans to use sheep genes to domesticate man and control the world.

In this puzzle game, your task is to take control of an earthling, human or canine, and herd flocks of sheep to safety so that they may reach their utopia: Blue Hawaii. Sheep employs an interesting mechanic and a novel approach to the stereotypical obstacle-ridden adventure game. Guiding the defenseless sheep past the many dangerous areas and toward the switches and triggered domino-effect puzzles is done through a sort of motion-detection system. If you approach the sheep, they slowly back away. Yell at them, and they scatter away from you. Sneak up on them, and you might be able to snatch one up and toss it wherever you wish. All these methods of control are necessary to bypass the stages' cunning traps and move toward the eventual exit point or get-away van. Controlling the sheep is easy enough to let you get started, but mastering their movements and responses to your actions can take a while to accomplish. Getting to know the four different breeds and four herders can help you quite a bit and makes completing the game much easier.

The imposed time limit can be a real pain. The frantic pace in some of the more difficult levels will have most of you reaching for something to calm your nerves. Such is the state of mind desired for an addictive puzzle game, and Sheep executes this state of wild panic excellently.

Graphically, the game has a lot going for it. Short, humorous cinematic sequences enlighten you as to the on-going story, the different characters, and the choice of sheep for that level. Long wools are shown headbanging and fighting, for example, which lends to the delightful atmosphere. Thankfully, the load times are short, and they don't detract much from the experience.

The game plays from a semidistant overhead view, with small 2D models representing your herder and the sheep. The levels are well designed, with interesting traps, obstacles, and puzzles done colorfully and creatively. Dyeing your sheep different colors and launching them over walls to knock down line-dancing cowboys like so many bowling pins is quite fun.

Sheep doesn't impress as much as it should in the sound department. While you do hear the bleating of your sheep as they flee from your advances, hop over obstacles, and get diced in shredders, the sound effects associated with the dangerous obstacles aren't prominent enough, eliminating any kind of fear a large robot sheep-slayer might pose. While the background music for the different stages is acceptably suitable for its themes, the individual songs aren't catchy enough to notice. The menu screens constantly feature the most annoying sheep-in-heat mating call ever heard, and the desire you will feel to quickly reach the next stage to avoid it couldn't be any stronger.

The search for the golden sheep available in each of the levels' four stages is a nice touch. If you can collect them, you will unlock a minigame before proceeding to the next level. These minigames are well executed, such as Snake, the Sheep rendition of the popular Nokia cell phone game. You can replay these games over and over once they're unlocked, and the break from herding your flock past obstacles is much appreciated.

The different difficulties are scaled nicely, easy being an excellent introduction to the game and difficult being controller-smashingly frustrating. The tutorial you can play through is well done and complete enough to introduce you to the finer points of sheepherding. It does well to convey the pace of the adventure, something that if not understood quickly will lead to many defeats.

Quite fun in its execution with a good two-player mode and the ability to replay each level to attain near perfect scores and increasingly higher rankings, Sheep offers a lot of bang for your puzzle-game buck. 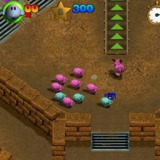