Striking visuals aren't enough to save this shallow brawler from being monotonous and frustrating.

The versatile word "shank" can be used as a verb, a noun, or, in the case of this gory beat-'em-up, the name of a man who does justice to his violent moniker. Gallons of blood pour out of your persistent enemies as you impale them with your machete, eviscerate them with your chainsaw, or just blow them sky-high with a well-thrown grenade. Shank is a savage game that revels in the brutality of street fighting, but the stylish exterior can cover for the pedestrian gameplay for only so long. The simplistic combat requires little more than mindless button mashing to cut your way through most enemies, and the inconsistent controls have a tendency to not respond at inopportune moments. Furthermore, the abbreviated cooperative mode is little more than a tease, raising the question of why you can't play through the entire game with a buddy by your side. Shank can still be a bloody good time, but a bevy of small problems drag the experience down.

Vengeance is one ill-tempered puppy. Shank has been wronged by some very evil men, and you set out on a quest to fix these injustices by slaying every person who dares to stand in your path. The subtlety-free story does little to endear itself. There is no wit or humor in the cutscenes, and instead they rely on unrepentant violence and copious bloodshed to tell this forlorn tale. But just because there aren't any interesting characters or relatable motivations doesn't mean the story isn't worth watching. The cutscenes have all been thoughtfully crafted, showcasing the striking visuals in all their cartoony glory. And there are a lot of cutscenes sprinkled throughout the game, appearing at the beginning and end of most levels, and sometimes even cropping up in the middle of a boss fight. The story rarely strikes anything beyond that one desperate note of unbridled anger, but seeing what sort of immoral hijinks pop up next is certainly a treat.

For the majority of the two-hour game, you walk along a 2D path brandishing your swords and shooting your guns at every person you meet along the way. Your repertoire of moves is robust, giving you all sorts of ways to dispatch your enemies. Melee strikes, gun blasts, and grenade throws are your go-to moves, but you can also grapple your foes to initiate a devastating up-close attack or perform a quick pounce to pin them to the ground while you hack away like a feral animal. Every few levels you're presented with a new weapon, and it's fun to see how a machete handles differently than a katana or see how things change when you switch from a pistol to a shotgun. But even though you have a wide assortment of moves, combat rarely evolves beyond mashing your melee attack button while mixing in a few gunshots or grenade throws for good measure. It's mindless, monotonous action that requires little strategy as you make your way to the boss at the end. Repetition sets in far too quickly, and the plentiful health power-ups ensure that you won't even have to worry about dying very often.

That's not to say there isn't some fun to be had in mercilessly whaling away on your enemies. Your foes bleed like they've been stricken with the "royal disease," which makes all of your dagger blows and katana slashes carry with them sadistic satisfaction. It's barbaric, yes, but it's hard to ignore the evil joy that emanates from offing these digital miscreants with remorseless carnage. But even if you can get over the shallow combat, niggling control issues cause untold aggravation. There is a slight delay between your button presses and the corresponding actions on-screen. This may sound like a tiny blemish, but in a game that requires precise execution, it can be the difference between life and death. This is most noticeable when you're trying to block. You have to wait for whatever move you just performed to finish, so you often have to watch in horror as your character continues to fire his pistol instead of raising his arms in self-defense like he should. Other troubles, such as inconsistent gun aiming and grenade animations that can be interrupted in mid toss, are just as annoying. The most egregious problem crops up during cooperative play. A context-sensitive prompt appears over downed allies to revive them, but you can mash away frantically at the button and still not bring them back to life, instead performing the attack that's mapped to the same button over and over again. These small issues add up to big frustrations.

The high point of the single-player adventure is the hulking boss fights at the end of just about every level. Shank is a giant of a man, but the abominations he squares off against to satisfy his bloodlust make him look like a teething baby. These fights are all pattern based, and though they are fairly easy, they are still quite entertaining. Each boss has a specific weakness you must exploit, ranging from knocking one thug into a roaring fire to tricking a butcher into lassoing a hanging pig. And the cutscenes that play when you raise your arms in victory send these vagrants to the netherworld in style. But as satisfying as it is to down these towering madmen, it's a shame they don't put up more of a fight. Your biggest obstacle to success is usually the controls. As long as you can time your dodge successfully and whale away when they present an opening, you should blow by them without breaking a sweat.

Aside from the single-player campaign, there is a separate story mode to play through cooperatively. This is a prequel tale to the main event, and you are restricted to teaming up with your buddy locally; there's no online option here. This is easily the best part of the game. The structure is identical to what you find in the single-player adventure, but monotony doesn't set in nearly as quickly when you have a friend by your side. There are even team-up attacks that let you finish off enemies in horrific new ways. However, a few issues do crop up even in this mode. The boss fights can be quite annoying. They require the same pattern recognition as in the main quest, but their inflated lifebars make them tests of endurance rather than skill. Furthermore, it's a wonder why you can't play through the main campaign cooperatively, and there are only a few levels in the two-player mode. Although it can be fun while it lasts, it's regrettable that there aren't more opportunities to join forces with a friend.

A flashy veneer is the most notable thing Shank has going for it. The colorful visuals and well-crafted cutscenes add a lot to the experience, even though the somber music does clash with the ferocious violence. But even with strong aesthetics, Shank can be very aggravating. The core gameplay is too simplistic to hold your attention for long, and the control blemishes foster serious bouts of frustration. Style can't quite overcome the lack of substance in this fun though shallow brawler. 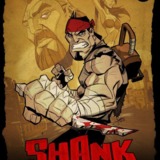 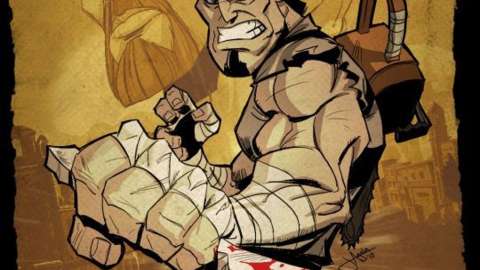 Shank is an action/adventure Beat-'Em-Up game by Klei Entertainment.