Second Dynasty's colorful graphics, soothing music, and encompassing array of both mah-jongg and shanghai variants are reason enough to recommend it.

Activision's Shanghai: Second Dynasty doesn't really offer all that much in the way of new content over its three-year-old predecessor, Shanghai: Dynasty. It's got a few new tile sets, a number of new layouts, and some new game modes. However, it reuses the interface screens and much of the graphics of the game that came before it. As such, it probably won't seem like much of a value to those who already own Shanghai: Dynasty. But for those not yet familiar with the Shanghai PC game series, Second Dynasty's colorful graphics, soothing music, and encompassing array of both mah-jongg and shanghai variants are reason enough to recommend it to enthusiasts of either or both tile-based games.

Despite its heavy reliance on the content of its predecessor, Second Dynasty still looks and sounds quite good. All tiles are presented clearly enough in mah-jongg and are enlarged to an even healthier size in shanghai. Each of the game's 54 tile sets is colorful and detailed, though only four of these are available for mah-jongg. The game's backgrounds aren't terribly complex; you usually play the game on a patterned shanghai table, a green felt table, or a blank blue background; and kids' shanghai includes five additional vibrantly colored backdrops. On the whole, Second Dynasty's visuals are simple but effective, as are its sound and music.

Second Dynasty's sound effects are adequate if nothing else; clear visual cues complement equally clear audio cues when tiles of a certain suit are matched. Also, the canned voice-overs for both mah-jongg games and the helpful narrator in the kids' shanghai game are loudly and clearly spoken, and they are usually indicative of the events that just took place. In addition, Second Dynasty has ten different tunes you can choose to play in the background; each is relaxing and mellow, and each manages to be quite pleasing to the ear without being intrusive.

Second Dynasty uses the same Windows desktop-style interface that Shanghai: Dynasty did. As such, it's an easy matter to get help; switch tile sets, backgrounds, or music; toggle other preferences; or jump to other games. Simply right-click on the background to pull up a Windows-style options box and choose whatever you like. The interface makes jumping from game to game and setting things to exactly the way you want them are extremely easy. Unfortunately, in high-resolution 1024x768 graphics mode, Second Dynasty retains the same small menu-screen text of its predecessor, which still clashes just as jarringly with the game's large, colorful tiles. Mah-jongg and shanghai enthusiasts who wear eyeglasses should consider themselves duly warned to keep their spectacles handy, or consider settling for playing at a lower resolution.Like Shanghai: Dynasty before it, Second Dynasty includes two main sets of games: the age-old Chinese tile game mah-jongg, and the equally venerable tile-matching game played with mah-jongg tiles, shanghai. Second Dynasty offers a number of variations on each. There are eight variants of shanghai and four variants of mah-jongg, including the new American-style mah-jongg and the completely original Power Dragon's Eye and Windstorm shanghai games. Second Dynasty also includes every single one of the previous game's modes of play, including classic, arcade, pandemonium, two-player, and kids' shanghai, as well as the traditional Chinese, Japanese, and Western mah-jongg modes. As in Shanghai: Dynasty, the mah-jongg modes can be customized in a variety of ways, and the American-style game is nothing other than the official style of the American Mah-Jongg Association, complete with opening game Charleston, steal, and courtesy passes. Aficionados of the American style should be pleased by Second Dynasty's extremely functional interface, options, and graphics.

Unfortunately, the same can't be said for Power Dragon's Eye, Second Dynasty's other new shanghai game. In it, you take on the role of either the dragon master or dragon slayer, and attempt to either fill a claustrophobically small area with tiles or keep it clear by matching tiles, respectively. The problem is that the playing area in Power Dragon's Eye is so small that games tend to be skewed in favor of the dragon master, as it's often easier to fill up the space with garbage tiles than it is to make matches, especially if you've had poor luck on your draws.

Shanghai: Second Dynasty has a great deal of mah-jongg and shanghai enjoyment to offer. There are eight modes of shanghai and four of mah-jongg, even though some may seem more enjoyable than others. Shanghai: Second Dynasty's 54 tile sets, 143 tile layouts, and multiple play modes compose a fairly comprehensive collection of shanghai and mah-jongg material. Unfortunately, a great deal of that material has simply been reused from Shanghai: Dynasty, so owners of that game may not find much value for their gaming dollar in Second Dynasty. On the other hand, those who don't own the previous game should find that Second Dynasty's content will provide them with much more bam for the buck. 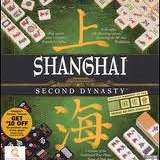 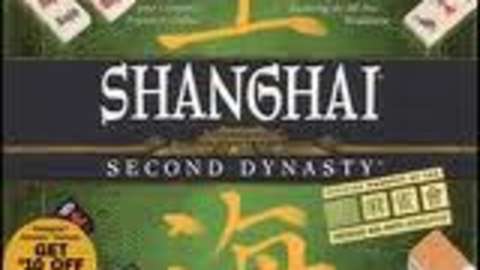 Second Dynasty's colorful graphics, soothing music, and encompassing array of both mah-jongg and shanghai variants are reason enough to recommend it.