This multiplayer-only shooter does absolutely nothing with the Shadowrun name, and its unique strengths are offset by a lack of variety.

You wouldn't automatically expect a multiplayer first-person shooter like Counter-Strike to serve as the main inspiration for a game based on a 1989 pen-and-paper RPG, but that's exactly what you get in Microsoft's Shadowrun, which takes all of the cyberpunk-plus-magic stuff from the RPG and boils it down to magic spells and technological character upgrades. The action is kind of neat, but a lack of variety and its multiplayer-only offering make for a pretty shallow experience that feels about $30 too expensive.

Aside from six brief-but-necessary training sequences and the ability to play against bots of questionable intelligence, Shadowrun is played online. Up to 16 players can get into one eight-on-eight game, pitting the rebellious Lineage forces against the new-world-order-like RNA Global, who are apparently fighting each other in an attempt to control magic, which has recently returned to an already-high-tech world. But that's about as much story as you're going to get here, as the rest of the game is all about buying skills and controlling artifacts.

Shadowrun is a round-based multiplayer first-person shooter that works a lot like Counter-Strike. At the front of each round, you're given a safe period where you can access a buy menu and purchase weapons, tech upgrades, and magic spells. So in addition to buying a submachine gun, you might pick up some aim enhancement in the form of the SmartLink tech upgrade, and the ability to teleport through walls, floors, and ceilings. These skills set the game a bit apart from the average team-based shooter as it lets you specialize. Spells like tree of life and resurrect let you heal and revive other players. Or you might get smoke, which lets you transform into a smoke form that can't be damaged by conventional weapons. Or perhaps you'll buy gust, which blows players around and, not so coincidentally, makes for a powerful counter against players using smoke. There's a pretty good collection of abilities to play around with, but the catch is that you can have only three of them equipped at any given time.

You'll make another meaningful choice by choosing your race. Humans are better at using tech upgrades. Elves move faster and can't take as much damage as the other races, but they regenerate health. Trolls are big and tough, but they're also very slow and don't have as much essence, which is the meter that drains when you cast spells. Dwarves are little and hardy, though they don't regenerate essence very well on their own. But this is offset by the dwarves' ability to absorb essence from nearby players or other magical items. For what it's worth, it seems like most players pick elves most of the time, though the different races seem to balance out just fine.

Once you've spent a little money on some guns and spells, it's off to do battle. There are three team-based gametypes, though there isn't a huge difference between them. Two of them focus on an artifact, which is Shadowrun's version of a flag. In one mode, each team wants to capture the artifact by grabbing it and delivering it to a team-specific capture point. Another gametype puts one team on full-time defense, and they must prevent the attacking team from capturing the artifact. The attrition gametype is the only one that doesn't center on the artifact, and instead you just need to wipe out the other team, but since you can win that way in any of the other gametypes, it doesn't feel especially different.

Every map can handle an attrition game, but only the larger maps can run raid or extraction games. The three smaller, attrition-only maps are for eight-player games, and they're actually smaller versions of some of the existing maps, which feels like a rip-off, considering there are only nine original maps to choose from. Between the lack of maps and the similarity between the gametypes, you'll feel like you've seen just about everything that Shadowrun has to offer within the first few hours--provided you can get into a game.

Shadowrun attempts to use a variation on Halo 2's party system, meaning you can get some people on your friends list together and ship off to find other players to play against. But even when you're alone, Shadowrun's automatic game finder seems to have trouble finding games quickly. It'll also drop you into games that are just ending, which is annoying. PC members can also get into PC-only dedicated server games using a more standard server browser, which is substantially faster, though not as populated.

Shadowrun is the first game to allow Xbox 360 and PC users to play on the same servers. The game seems to work just fine on both platforms, and there's almost no indication that a player is using a PC or a 360 to play. Rather than limit auto-aim to just the 360 or to controller users, as the Vista version of Halo 2 did, Shadowrun gives a little bit of it to everyone, which is, of course, pumped up with the addition of the SmartLink ability. This might frustrate PC mouse-and-keyboard users, as it feels like your aim is being taken out of your hands a bit; and if you've been playing PC shooters with any regularity, you probably don't need the help. But regardless of how weird it can feel, it does at least feel balanced.

Visually, Shadowrun looks great in some areas and painfully unfinished in others. The environments and textures look good, and the spell effects and other particle-oriented elements look great. But then there are dumb omissions, like the way that they didn't bother to include any kind of climbing animation--so when characters go up ladders, they do so locked in their standing position with no movement whatsoever. Also, the different player models look pretty good, but there's absolutely no variety. All Lineage elves look identical, all RNA humans look the same, and so on. Some sort of differentiation would have been nice. These kinds of omissions make the game look sloppy in spots, which is a real shame.

Aside from the voice chat, which works just as well on the PC as it does on the 360 provided you have the proper hardware (like a 360 headset hooked up to your PC), the rest of the game's audio is good, but a bit sparse. Since it's all multiplayer, there's no in-game music. But there's an announcer who lets you know when rounds end, or when either team grabs or drops the artifact. If voice chat isn't your thing, you can push a button to give a quick, automated report about your surroundings, which is good for letting your team know when an area is clear, when there are enemies present, or when you need backup, since it'll put icons up on your teammates' screen, letting you know where the call is coming from. Gunfire, explosions, and things like that all sound pretty good, too.

Perhaps the most telling aspect of Shadowrun comes from WizKids, the maker of the other Shadowrun stuff. When the game was first unveiled last year, it alerted Shadowrun fans that this might not be for them by posting "fair warning, however: Microsoft rewrote the timeline and setting for this game, so it is not in continuity with the tabletop RPG. It may be more accurately described as a game loosely based on Shadowrun." If you're going in with no expectations on the lore and licensed side of things, you'll find a decent and somewhat unique multiplayer shooter. But you'll also have to pay full price for what feels like half a game, making it difficult to recommend. 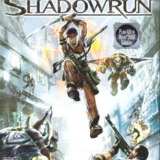