Shadowgate Classic has is that it has not improved with age, and newcomers will fail to see the original charm hidden under the unintuitive gameplay.

Shadowgate first hit the good old Nintendo Entertainment System back in the mid-'80s, a time when RPGs were a curious rarity on the console scene. It's interesting to note that in a time when the genre has finally achieved mainstream status, this game has been rereleased with no changes. Many will say that you can't improve on a classic. Lots of other people will be wondering why they spend half their time navigating menus.

I'm going to admit to something here. For the first two hours of playing this game I couldn't get past the room you start exploring the dungeon in. Embarrassing? Sure, but it's more annoying than anything else. This is two hours spent looking blankly at two screens, reading the same text over and over, and trying to figure out what the heck you're supposed to be doing. Eventually the solution - opening the skull on the front door and taking the key that lies inside - became apparent, but it served as an ominous warning. The puzzles in Shadowgate Classic aren't obvious and are difficult to solve, and they don't get any easier as the hours go on. In fact you could swear that the game runs on its own unique logic system, one that bears no relation to the world you and I live in.

The number of buttons on the system and the screen's limited resolution don't lend themselves too easily to the RPG genre, but the developers have done a good job of fitting it all in. A screen full of menu options is always available and lets you do things like take, look, open, and use objects and peruse your inventory. Picking up a sword on the floor, for example, requires a few clicks of the A button and a few seconds spent moving the cursor around the screen. It's not the best interface in the world - in fact, it's downright ugly at times - but it does work. Eventually.

Graphically this is a decent game, with good backgrounds and fairly good use of color throughout. NES- devotees will see that everything looks exactly as it did then, which is apparently a good thing. It would have been nice to see some of the machine's extra memory put to good use - ever hear of animation that uses more than two frames, Tecmo? Or screens with more than eight distinct colors? Apparently not. At least this ensures that the game plays just as well on a monochrome Game Boy as it does on a Color one. One thing Shadowgate does have going for it in the presentation department is the music. It's moody, atmospheric, and somehow manages to sound decent when pumped through the machine's tinny speakers.

Progress through Shadowgate is slow. We're talking watching-grass-grow slow, here. A typical session can last a few hours, thanks to the sloth-like control system and the amount of time it takes to get from one room to another. While this is fine for RPG fans who want longevity, it's still a strain on the eyes. The biggest problem Shadowgate Classic has is that it has not improved with age, and newcomers will fail to see the original charm hidden under the unintuitive gameplay. Those who are old enough to have played the game in its original incarnation will quickly find that this is a game that really only needs to be played once. 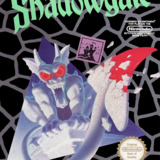