Shadow Man embodies the spirit of solid-gold game design: a worthwhile, captivating storyline; gameplay that lets you choose your own path; and tons of hidden areas to discover.

Shadow Man is Acclaim's latest attempt to strike gold with a game starring a comic-book hero (the first being the wildly popular Turok). While this game may not generate the "mother-lode level" excitement that Turok did, this occult-themed third-person adventure is a very valuable find in its own right - thanks to an engaging storyline and an open-ended level design that offers gamers plenty to discover.

For players sick of cookie-cutter storylines, Shadow Man will prove a refreshing - if mentally disturbing - change of pace. The hero, Mike LeRoi, faces the challenge of stopping a clique of evil serial killers from bringing about the apocalypse. Armed with the ability to teleport from the normal world to Deadside, a place where souls (and baddies galore) lurk, LeRoi must find the voodoo skills, weapons, and dark souls that'll help him stop the end of humanity.

At first glance, Shadow Man may evoke comparisons to Tomb Raider or Duke Nukem, but the gameplay is far more open-ended, which is perhaps this game's greatest strength. Rather than have one-way levels or mission objectives, this game leaves you at a basic starting point and then lets you go wherever you choose. Technically, LeRoi must find up to 120 dark souls scattered throughout Darkside, but he must also find special abilities and items to get him to new areas of the game. As a result, there's a lot of backtracking involved, since you must pass up many secrets until you possess the voodoo magic to get them. What makes this gameplay style satisfying is the thrill of exploration: Although there's a female ally who offers some hints, there are no other crutches for you to rely on - a good change from games that give players a virtual "road map" to the finish. To augment the exploration aspect of the game, many areas have jumping sequences, puzzles, and monsters to take care of. Thanks to the forgiving control, the jumping sequences don't seem too frustrating for a 3D game - although it's a pain at times to redo a whole sequence if LeRoi dies midway through. (The game warps you back to the last checkpoint every time LeRoi gets killed.) The puzzles seem rather straightforward: Find a key to unlock doors or discover a hidden passageway hidden by a fake wall. The monster battles are the least engaging part of the gameplay experience, since multiple, consecutive shots are required to kill a baddie - it gets rote after a while, especially when you are backtracking through levels. Fortunately, the game's grand variety of weapons makes the killing process more entertaining as the story progresses.

The control scheme takes a page out of The Legend of Zelda: Ocarina of Time: You can jump, crouch, and assign items to different buttons. Shadow Man takes that latter feature a step further by giving you the ability to arm LeRoi's left and right hands in any configuration: two weapons, a weapon and a key, etc. The control for the most part is solid, except for one irritating glitch that lets LeRoi grab some ledge edges but not others, even though they're all within reach of his hands. The game also incorporates the "lock-on" targeting system; first introduced in Zelda, it works effectively against enemies and fits in well with the control scheme. In terms of presentation, this game shines. The great storyline comes with plenty of background material to find and examine, such as files on the serial killers and voodoo. The rendered-on-the-fly cinematic sequences come with full audio that enhances the experience.

Graphically, the game has decently rendered levels, although the muted color palette makes some portions of Deadside slightly drab. (In its defense, however, this look fits with the game's dark tone, so it's no big deal.) Some exploration areas are dimly lit, which makes it hard to see some items, but fortunately you have the option to adjust the brightness setting.

Thanks to the sprawling levels, this game delivers plenty of multiple endings and opportunity for exploration, which is a huge plus in terms of value: Don't expect to beat this game in a night or two. Shadow Man embodies the spirit of solid-gold game design: a worthwhile, captivating storyline; gameplay that lets you choose your own path; and tons of hidden areas to discover. Although the adult themes and occasional swear words may make it unsuitable for younger players, for most other players it's definitely worth looking into. 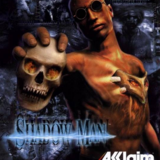