Shadow Hearts: Covenant is a great game that any fan of the role-playing genre would likely enjoy.

If you're a console role-playing game and you're not Final Fantasy, or you don't burst fully formed from the mind of a Square Enix luminary, it can be tough to garner notice among what some see as a field of also-rans. Shadow Hearts: Covenant takes the traditional turn-based save-the-world formula, tosses out any semblance of pretentiousness, adds its own bizarre style and humor, and then follows an original cast of characters on an enjoyable adventure. While not utterly unique in its execution, the game is a great example of the genre done well.

The game kicks off about six months after the conclusion of the first Shadow Hearts, with World War I slowly gaining momentum and disturbances flaring up all over Europe. Karin Koenig, an officer in the German army, is sent with her squad to seize control of the sleepy village of Domremy. Shortly after arriving, Karin and her forces are routed in the village chapel by a dark, winged demon. The monster is actually a young man named Yuri Hyuga (the antihero and protagonist of the first Shadow Hearts), who has the power to assume the form of a wide variety of creatures and is safeguarding the village from invasion. Not willing to take defeat lying down, the Germans soon send Karin back in, along with a mysterious cardinal named Nicholai who's armed with a holy artifact. The artifact puts a curse on Yuri, stripping him of all his learned transformation abilities, containing his considerable power, and really ticking him off. As it so happens, the attack on Yuri was part of a scheme by a secret society called Sapientes Gladio, which, like any respectable secret society, is up to no good. When the village is subsequently destroyed, Karin defects to team up with Yuri so they can figure out just what Sapientes Gladio is planning and how to free Yuri from his curse.

This all sounds suitably sinister, and it is--Shadow Hearts: Covenant is full of dark mysticism, ancient rites, demons, and plots for world domination. It's also full of absurdist touches like Joachim, a vampire trained as a pro wrestler, who fights with a giant mailbox when he's not in bat form. At one point in the game, your party gets lured to a lush island villa, where you have to lock horns with a fierce boss monster that happens to be a giant, fluffy, pink kitten. Yuri will at times narrate past events and accompany his grim dialogue with childish stick-figure pictures of the action, demons reduced to globe-headed scrawls with lopsided fangs. This is not to say that the game plays out as a comedy--the various dark events and scattered atrocities are taken quite seriously by the characters involved--but the way is sweetened by a good deal of irreverent humor. While all the jokes, sexual innuendo, and pregnant pauses are sometimes corny, there are plenty of genuinely funny moments that enhance the experience, giving it a charm that many plot-heavy RPGs lack.

When random and scripted encounters send your team into battle, you'll be presented with a turn-based system in which your characters will alternate with enemies depending on speed. Whenever you choose an action for any of your four party members, be it launching a melee attack, casting a spell, unleashing a special ability, or even using an item, a disc called the judgment ring will appear. A hand will start to sweep around the disc, and you'll need to time your button presses as the line passes through the colored pie slices that are present. Hit everything correctly, and your action will be successful. Many times, there's an extra red sliver on the trailing edge of a colored zone that will grant you a bonus if you hit it--attacks will cause more damage, items will heal more than usual, and so on. The rub is that these red zones require precision and careful timing to hit, and if you miss them, your move is over prematurely, or sometimes negated altogether. Lining up these criticals and hitting the zones just so is the addictive draw of the judgment ring system, which moves outside the traditional RPG practice of selecting an action and then just sitting back and watching your character carry it out. But there's even more to it.

You can also add items to individual party members' rings to add various effects to them--you can add another strike zone, increase the zones' size, increase the damage output (while decreasing the zones' size), and so on. For the faint of heart and less nimble of thumb, you can even set characters to "auto ring," which will let them make their moves without you doing a blessed thing. (This lessens the amount of damage dealt, however, and also just isn't as fun.) The system can be tricky to get a handle on, but once you grow accustomed to it, there's a certain cadence to the ring presses that almost makes it feel like a rhythm game. Master the timing, and even the slimmest of critical zones will fall to your button presses for a satisfying outcome. It's a great system, and an excellent way to combine a turn-based system's measured pace with an interactive element that requires careful concentration.

Once you have a handle on those basics, you can try your hand at combo attacks, which involve moving characters close to each other and then letting them both move in an attack chain. For each successful link of the chain you complete, you'll get combo bonuses, and if you manage to execute a four-person combo, you'll be able to unleash a powerful combo magic attack as the final move. Each character is linked by one of the four buttons on your controller, and the required button will flash just as you complete one turn for the move, before it continues to another character. If you miss the button to link, or miss any of the ring presses during your move, the combo will break, and anyone left in the chain will lose their turn. It's a gambit to be sure, but one that can pay off big when facing tough boss characters, even if they don't happen to be kittens.

Mastering the ring provides rewards outside of battle as well You can earn discounts at item stores by mastering the judgment ring, or boost the sale value of your items by gaining an extra markup percentage. Such things are optional, but they really provide a good bonus for those adept at handling the ring.

You'll tour the world in Shadow Hearts: Covenant, spending a lot of time bumming around various areas of Old Europe and, later, Japan and areas east. The places you'll visit are rich in character and detail, from baroque palaces with brightly colored, sun-dappled halls and an abundance of plants, to cozy seaside villages, to the dark and cluttered confines of an old prison. The towns tend to be fairly small, with only a few areas to visit, but they're well put together, with lots of crevices for interesting items to hide. Yuri and his companions exude style and fluid motion, from the wizened old puppet master Gepetto, to the sleek white wolf Blanca, to the flamboyant, overenthusiastic Joachim. The game melds still art with in-engine storytelling and some great-looking computer-generated cutscenes to move the narrative forward, and the result is very easy on the eye.

The game offers some great pieces of music that are at once haunting and inspiring, making good use of eerie vocals and brisk fiddle tunes. It's rare to have a battle theme that's catchy enough that you won't mind hearing it the countless times you'll need to along your journey, but Shadow Hearts manages that, along with a captivating main theme and other light pieces of music that fit the areas you'll visit well. The voice work in the game is all right, especially considering some of the weird dialogue the actors had to work with, but the spoken word in the game really isn't a highlight.

Covenant comprises two discs' worth of lengthy adventure (around 40 hours) that's easily extendable with all the bonus items to collect, special moves to learn, weapons to acquire, and dungeons to visit. Even if you don't explore all the nooks and crannies, Shadow Hearts: Covenant is a great game that any fan of the role-playing genre would likely enjoy; its style, its humor, and its well-crafted battle system set it apart in a world of Final Fantasy clones.

View Comments (1)
Back To Top
8.6
Great
About GameSpot Reviews 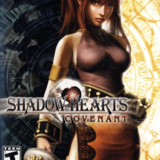