Sgt. Rock: On the Frontline Review

Classic gaming fanatics will eat it up, but fussier gamers would be more satisfied elsewhere.

Old-timers may recognize BAM!'s Sgt. Rock: On the Frontline as the sequel to Taito's arcade classic Front Line. Despite the DC Comics Sgt. Rock license, the core game remains unchanged. In this top-down combat shooter, you'll guide Sgt. Rock past hordes of enemy soldiers en route to a mysterious fortress dubbed SK-01. Along the way, you'll pick up a number of weapons, rescue a few hostages, and utilize a fun array of deadly vehicles.

Sgt. Rock: On the Frontline is by no means a complex game. The goal in each of the game's eight levels is the same - plow through enemy lines, lay waste to countless enemy soldiers, and destroy a waiting boss. If you've played similar titles, such as Ikari Warriors, Commando, or Expendable, Sgt. Rock should be familiar territory. While it lacks complexity, the game makes up it for with its adherence to classic gaming principles and a solid selection of weapons. Walk up the screen, kill anything that moves, and earn as high a score as possible. As you progress, levels become more difficult and your score multiplier increases. Run out of lives, and you're done. To aid your efforts, you start with only a stock assault rifle, which you'll soon augment with the numerous weapon upgrades that are lying around or left behind by vanquished enemies. Grenades, plastic explosives, shotguns, flamethrowers, and rocket launchers are just a few of the many goodies you'll discover, as well as the usual assortment of extra lives and invincibility power-ups. Once in a while, you'll also happen across an unattended tank, jeep, or watercraft, which you can then pilot for some wacky military-style antics. The control is a bit unresponsive and stiff at times, but on the whole, Sgt. Rock: On the Frontline is a game that you'll play until it hurts.

Since it's based on an older game, Sgt. Rock: On the Frontline isn't the bleeding edge in terms of graphics or sound. In fact, compared with a number of recent Game Boy Color release, it's barely a paper cut. Other than a marvelously inspired final base level, the majority of the game's backdrops are bland and unassuming - deserts, forests, marshes, and the like. Cubic buildings, repetitive enemy sprites, and underwhelming explosions compose the rest of Sgt. Rock's graphical capabilities. Visually, the game is nothing to write home about, but it gets the job done. Similarly, a collection of hokey army tunes and some tic-a-tic sound effects round out the game's auditory ambiance. Fans of the genre probably won't find fault with the low-key nature in which Sgt. Rock is presented, but newcomers may wish to beware - this game is no Metal Gear Solid.

Overall, Sgt. Rock: On the Frontline is a good game. It should be; it's based on one of the greatest hits of the '80s. However, with this reminiscence comes a downside - replay value. Other than putting your best foot forward in an effort to attain a better score, there's really nothing left to do with Sgt. Rock once you've beaten it. There are no hidden characters, no bonus vehicles, no mission branching, and nary a two-player feature in sight. As such, classic gaming fanatics will eat it up, but fussier gamers would be more satisfied elsewhere. 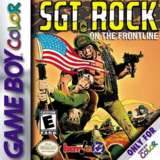