If you're looking for a frenetic beat-'em-up, a la Dynasty Warriors, 20XX may scratch your itch, though it's marred by stilted pacing and a wildly inconsistent frame rate.

Though filmmaker Akira Kurosawa made many films that can be considered masterpieces, the one he's best known for is Seven Samurai, which is an amazingly crafted motion picture that has directly inspired films like The Magnificent Seven, The Dirty Dozen, and countless other "men on a mission" films. Now, thanks to game publisher Sammy, development house Dimps, and Akira Kurosawa's son, the 1954 samurai epic has stepped into the realm of video games with Seven Samurai 20XX. Tapping a three-hour black-and-white Japanese-language film as the basis for a video game is already pretty strange, and it's a fact that's only intensified by the game's peculiar sci-fi setting. Ironically, though, the end result of this unlikely effort is just a straightforward, unevenly paced hack-and-slash action game.

The narrative behind Kurosawa's original Seven Samurai is a simple but elegant story about a group of samurai who take on the task of defending a small, incredibly poor village from a group of marauding raiders. At its core, Seven Samurai 20XX is basically about the same thing, though the setting's been changed from Feudal Japan to a bleak futuristic landscape, and the bands of thieves have been replaced by endless hordes of genocidal robots. Because of the primordial nature of the story, this could've potentially been a pretty smooth transition, but instead of leaving Kurosawa's humble story be, Seven Samurai 20XX injects it with all sorts of anime-inspired melodrama, complete with the cocky young hero with a troubled past and the demure young girl with incredible secret powers. Eventually, the peripheral nonsense that the makers of 20XX have wedged in virtually eclipses the core narrative, thus bringing to question why Sammy bothered with the Seven Samurai name in the first place.

With the liberties 20XX takes with the Seven Samurai structure, the game easily sets up a scene where you, as Natoe (one of the seven titular samurai), fight your way through room after room of robots of varying shapes and sizes. This is a pure beat-'em-up, with quick pacing and button mashing-friendly controls. Natoe has but a single attack button, which can--and certainly will--be tapped repeatedly to create multihit combos. You also have the option of tapping L1 and R1 at the same time, which will cause Natoe to unsheathe his second sword, which nearly doubles the speed and reach of his attacks. As soon as you unsheathe the second sword, a meter will start depleting. After 20 or 30 seconds, it'll run out, thus leaving Natoe with a single sword again. You can increase your time in two-sword mode by performing a "Just" move, which is a timing-based move where you either block or dodge an attack right when it's about to happen, or you press exactly toward an enemy as you issue an attack. Once you master the Just Attacks, you can pretty much go the length of an entire fight without having to put away your second sword. However, even if you don't bother learning the timing on the Just attacks, the recharge-time on your two-sword meter is pretty brief. Furthermore, the places you'll be fighting in usually provide enough room to run around until your meter is full again. Though the game can prove a bit challenging near the end, it takes its sweet time ramping up the difficulty, which provides you with plenty of soft enemies and health pickups.

The simplicity and the speed of the combat will keep your attention during fights, especially when the game starts throwing a dozen enemies at you at a time. But after you clear a room of bad guys, the game loses some of its focus. There's some adventure game stuff, where you'll run around and talk to people, but these sections are always short and are always optional. There's lots of stuff like this--where you'll finish a battle, walk down a hallway, watch a cutscene, walk down another hallway, and then start another fight--which totally disrupts the pacing of the game and probably should've just been cut entirely. After going through the combat-hallway-cutscene-hallway-combat cycle a few times, you get the feeling that there was originally going to be much more to Seven Samurai 20XX than just a lot of basic beat-'em-up action, some half-baked adventure game stuff, and a plethora of cutscenes, but something just didn't come together.

Topping off the weirdness of Seven Samurai's having been set in a Final Fantasy-like future is the game's visual style, which is largely defined by the character designs of French designer Moebius, aka Jean Giraud, who is likely best known for his illustrations in Heavy Metal magazine. Watchful eyes may spot some Moebius trademarks in some of the character designs, but having his illustrations filtered through a team of Japanese 3D modelers has left most of them looking like pretty generic anime characters--with lots of Bambi-eyes, feathered hair, and half-shirts. In contrast to the high fashion, the environments tend to look pretty boxy and bland, save for the Blade Runner-inspired neon-lit casino district. Ironically, Seven Samurai 20XX looks both its best and its worst during combat. Natoe's flamboyant swordplay, some dizzying slo-mo camera effects, and an almost overwhelming amount of lighting and particle effects can definitely make watching the game in motion a treat, but they also contribute to some really spectacular slowdown, which is something you can hardly go through a single fight without encountering.

Though it's unable to clear some technical hurdles in the visual department, the graphics are, at least, more inspired than the sound design. It's not exactly bad; it's just easily ignorable. The voice acting, which wouldn't sound out of place in a syndicated anime TV series, is passable, though there are little sound bites that get repeated ad nauseam during combat. Other than the occasional canned "Argh!" your character will let out when he's hit, the sound during combat is dominated by stylized sword slashes, which sound decent and fit the tone of the game. The tempo of the combat is further heightened by the soundtrack, which relies mostly on a laid-back percussion-based tune during adventure sequences and cutscenes but quickly kicks into action movie techno, complete with heavily distorted guitar loops, as soon as you pull out your sword. The music is pretty good, but it would've been nice if there were just more songs.

Seven Samurai 20XX is likely to draw a particularly divergent crowd. There are those whose interests have been piqued by Kurosawa's source material--and if that's you, you'll undoubtedly be displeased with the way 20XX handles the story. Alternately, if you're looking for a frenetic beat-'em-up, à la Dynasty Warriors, 20XX may scratch your itch, though it's still marred by stilted pacing and a wildly inconsistent frame rate. 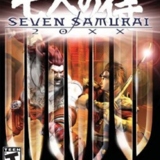