Serious Sam returns with another great HD remake of a gonzo shooter classic, this time on XBLA.

For a nearly decade-old game, Serious Sam: The Second Encounter has aged pretty well. The HD remake of this classic gonzo shooter from Croteam sucks you through a time tunnel to a simpler day, when the monsters were monstrous, death was constantly hovering over your shoulder if not shooting you square in the face, and the good guys doled out quips like Schwarzenegger. This is run-and-gun shooting mayhem with no story to interfere with the arcade action. Still, be warned that the game has both feet firmly planted in retro-ville, with gameplay straight out of the way-back machine. So don't come knocking here unless you have an appreciation for old-time shooters gussied up with gorgeous modern graphics and new multiplayer modes.

If you played The Second Encounter when it was first released in 2002, this HD remake will transport you back in time. This is a straight-up reworking of the eight-year-old game, with all of the original levels, monsters, and weapons right back where they used to be. The focus of the game remains on crazy battles with dozens if not hundreds of monsters attacking you simultaneously from all directions. The vibe is a lot like a first-person 3D take on the classic arcade game Robotron, in that you're constantly being swarmed by creatures. Running, strafing, and shooting are just about all that you do here, along with the odd diversion where you have to hit a button or pick up a key or some other artifact to clear the way forward.

There is a goofy story about "Serious" Sam Stone battling the alien forces of an insidious baddie called Mental, but it's easily ignored. The action picks up right after the end of The First Encounter, with the spaceship that Sam was on crashing on a mountain in some kind of Aztec jungle dotted with pyramids and temples. From there, Sam goes through two more worlds, one based on ancient Persia and another set in some kind of medieval horror movie, blasting the same assortment of alien creeps until there are no more to blast. You can also skip the plot entirely and play Survival mode solo, where you simply try to stay alive as long as possible while fighting endlessly spawning packs of monsters.

Combat is pretty much unadorned--you walk into one ambush after another, mostly in huge outdoor areas or big indoor arenas--but it's all so speedy and crazy that it's hard to stop playing. There are some upgrades from The First Encounter, including handy new weapons like a chainsaw, a flamethrower, a sniper rifle for taking down long-distance foes like fireball-spewing green demons, and even the Serious Bomb smartbomb. Some new monsters have been thrown into the mix, like alien soldiers and a gunslinger who looks a lot like Yosemite Sam. Levels have been jazzed up with some special rooms featuring bizarre gravity effects, winds that blow you all over the place, giant tumblers that toss you around, and bouncy floors that sail you and a bunch of monsters into the air all at once. It can all be a bit too much at times, with the sheer number of enemies numbing you after an hour or two of nonstop play. The game is also stupidly hard in spots when you're playing solo, requiring an approach where you don't take things too seriously. Thankfully, the game is so unremittingly ludicrous that it's easy to laugh off how many times you're killed.

The biggest difference between then and now comes with the visual presentation. Everything in the game has been remade with the Serious 3 Engine, which lies under the hood of Serious Sam 3, a sequel currently being prepped by Croteam. And it all looks great. Colors are bright and stick mainly to primary hues, and all three three levels come with beautiful touches that add to the atmosphere. The lush jungle of South America is thick enough to hide monsters and power-ups. Persia combines desert sands with brightly painted temple walls and Eastern architecture. And the medieval villages come equipped with little touches straight out of old Hammer horror movies, like lightning in the distance and creepy old castles with torture chambers. Enhanced sun and shadow effects add depth to levels, making the settings more realistic and cartoonish at the same time. Monsters have been upgraded, too. All the old faves are back for more, like the screaming headless bombers, the giant demons, those annoying black galloping skeletons, and that pumpkin-headed goon wielding the chainsaw, but they've all been given makeovers. New models offer superior animation and appearance, so the creeps come with more realistic physical features like slimier skin and more convincing flames.

Audio effects haven't received the same going-over. Weapons don't resonate like those in a completely modern shooter. The gamepad doesn't shake quite as strongly as it should when something explosive happens, like a bunch of headless bombers going boom in your face. It is easy to tell where enemies are coming from now, though. Directional audio lets you listen for the approach of baddies, so with a surround system you can instantly tell where those screaming bombers or charging werebulls are coming from. Music hasn't been changed much if at all from the original Second Encounter. But it's still great. All of the tunes are catchy little numbers that perfectly play up your surroundings, like the jungle beats in South America and the sinister organ of the medieval levels. The music also revs up whenever enemies appear on the scene, letting you know when the big showdowns are about to begin.

Multiplayer has been given an overhaul, with more modes of play even in comparison with the multiplayer in the HD First Encounter. Cooperative play has been expanded with different game types, including Classic, Survival (take on waves of baddies as a team), and Coin-Op (you start with three lives). Traditional competitive multiplayer games have been tossed into the mix as well, along with some more unique selections. So you can take in old-fashioned fare like Capture the Flag and Last Man Standing, or get into something like Beast Hunt, where you earn points for specific kills, and My Burden, where you earn points by hauling around a weight. People are playing over Live right now, too, which is an improvement over the tumbleweeds blowing through the servers set up for the PC version of the game when it was released last spring. It may be a little long in the tooth for some, but Serious Sam HD: The Second Encounter is big, dumb fun. This is a definite improvement on the 2002 shooter classic, and as such, it is a ton of zany fun for anyone who wants to revisit the game, and certainly recommended for shooter fans who didn't get to experience the original back in the day. 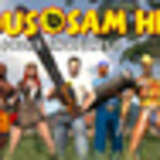 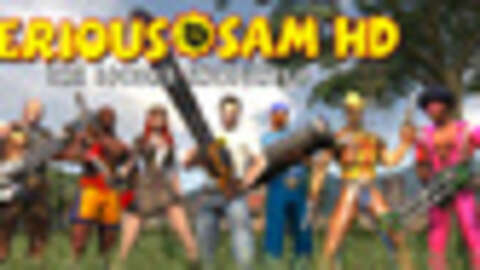 8
Sign In to rate Serious Sam HD: The Second Encounter