Technical issues and tired tropes aside, Serious Sam 4 is a largely successful synthesis of the series' disparate identities.

In Serious Sam 4, the long-running FPS series may have finally found a workable identity. Through each entry, developer Croteam has held onto the core gameplay loop that defined Sam's initial jaunt across Egypt. You will always back-pedal, you will always circle-strafe, and you will always fight dozens of Sam's memorable cadre of alien enemies at once. But, at times, that loop has been obscured by some of the strange decisions Croteam has made with the series. It was never broken, but each game finds the developer trying to fix it.

Enter Serious Sam 4, yet another reinvention that seems to draw from every period of the series' long life. As in Serious Sam 3, the graphics are realistic (though a little stiff). As in Serious Sam 2, there's vehicular combat and humor to spare (and a surprising portion of the jokes land). And, as in First and Second Encounter, the gameplay is razor-sharp and front-and-center. It's been nine years since the last mainline entry, and in that time we've witnessed the revival of circle-strafing shooters thanks to games both big (Doom) and small (Dusk). But, in this newly crowded landscape, Serious Sam 4 has a secret weapon. Croteam is simply willing to throw a ridiculous number of enemies at you at all times and it has the tech to pull it off.

In this outing, which functions as a prequel to The First Encounter, Sam and a small group of resistance fighters are attempting to push back the villainous Mental's assault on Earth. The alien horde has already won, but the resistance hopes to score a strategic advantage by tracking down the Holy Grail, which is actually an alien artifact hidden somewhere among the art and architecture of an impressively unspoiled Italy.

As Sam embarks on this quest, he faces down a familiar horde of enemies with a familiar arsenal of weapons. If you've played Serious Sam before, you'll recognize most of them. There's the Sirian Werebull, a fleshy creature with horns that charges headlong at you, unless you can take it out with a few well-timed blasts from your double shotgun. The Beheaded Kamikaze, which boasts a pair of bombs in place of hands and a scream you can hear from a mile away, is also back, and will force you to pick it off before it gets close enough to explode. It can also be led into a larger crowd of enemies before you shoot, setting off a powder keg of blood and gibs. One of my personal favorites, the Reptiloid, often posts up on a tower, then hurls acid green homing missiles that will follow you until they find their target, or until you shoot them out of the air.

It's an impressive roster composed of some of the most memorable and well-designed enemies in gaming. The Serious Sam model--drop a ton of enemies in an arena and dare you to come out on top--only works because each enemy is easy to recognize and, as a result, internalize and remember how to handle. Say you hear the Beheaded Kamikaze's signature scream and switch to your assault rifle to handle the dozen the game throws at you before they get close enough to explode. Once they're dispatched, you hear the ground rumble beneath the feet of the Sirian Werebull and pull out the rocket launcher to finish the herd off with a string of one-hit kills. But then a pair of Reptiloids appears on far off towers, so you switch to the sniper rifle to pick them, and their homing projectiles, off from a distance. All of this happens in the space of a few seconds and the game rarely does you the favor of sending each group separately. But the enemies are defined by distinctive designs, behaviors, and often audio cues, so you're rarely caught by surprise.

As Sam manages these crowds, the chiseled hero draws on the same impressive arsenal he's wielded since the beginning (and a few new tools, as well). The rocket launcher returns, now with an upgrade that allows you to lock on to multiple enemies. The minigun is essential for crowd control, ripping through dozens of aliens in a matter of seconds. And, my favorite, the portable cannon, is back, too, allowing Sam to launch massive cannonballs into enemies, destroying even the meanest minotaurs in a few hits. Each gun has its use, and I enjoyed the process of figuring out which gun worked best against which enemy. You can also expand your roster of tools by completing side quests--a new addition in Serious Sam 4. Sometimes these diversions grant you a weapon mod, like that rocket launcher upgrade. Other times, it might grant you a gadget, which can run the gamut from health kits to portable black holes or a bomb that slows down time for everyone but Sam. These gadgets can help turn the tide in battle, but you find them so rarely that you need to be choosy with how you use them. As a result, they don't feel like a major addition; more like an interesting touch.

My biggest gripe with the game is that it rarely gives you space and time to marvel at a weapon's power. As soon as you get the cannon, you'll be launched into a fight that demands you use it against every enemy just to keep up. In this way, the game often robs you of any real feeling of power. Sure, you're obliterating Reptiloids in one hit, which is cool. But the game overcompensates by throwing a dozen Reptiloids at you at once. Instead of providing an opportunity to appreciate the cannon's one-shot one-kill power, Serious Sam 4 skips straight to making you feel like you're barely scraping by, cannon notwithstanding. You're constantly on your back foot, which can make the (otherwise excellent) combat begin to feel a little repetitive. I love the tension of Serious Sam 4's fights, racing around hordes of enemies, attempting to pick the right weapon to buy myself a moment's peace. But the game rarely gives that tension a release valve, and as a result, it can be exhausting to play.

In tough fights, it helps that, at least some of the time, Sam has a team he can rely on. In this entry, you're joined by a squad of soldiers who can help take enemies down in battle. Given how frenzied late-game battles are, I was always grateful to have any help I could get. Each member of the squad fits pretty neatly into well-known archetypes: the priest who's handy with a shotgun; the paranoid conspiracy theorist; the female soldier who can kick just as much ass as the boys; the new recruit who can't quite hold his own in battle yet. These are reliable stock characters, and I mostly enjoyed watching the group banter. A running joke has each of the squadmates attempting to proffer the best one-liner after dispatching baddies. These moments made me laugh out loud on a few occasions and, more surprisingly, the story actually manages to land a heartfelt beat or two along the way.

Serious Sam 4's reliance on tropes isn't always harmless, though. There are two men from marginalized backgrounds on Sam's squad, and both fall pretty neatly into racial stereotypes. Rodriguez, a Mexican-American soldier, peppers his speech with words like "cajones," "culo" and "pendejo." This trope, which sees Latinx characters dropping Spanish words into otherwise English sentences, is common in games, employed by writers to highlight a character's Latin-ness. But, as Latinx critics have pointed out, it's an ignorant portrayal of the way bilingual Latinx people actually speak. Similarly, a Black character in this game falls into a well-known trope that feels dated and has for years. I would have loved to have seen Croteam put even just a little bit of thought into the ways they handled the writing around these character's racial identities.

The story is also occasionally hampered by the game's technical issues. While Serious Sam 4 on PC ran at or around 60 fps during frantic action, frequently hitched during cutscenes. Pop-in was also a consistent problem in and out of cutscenes, with background textures often arriving midway through a shot or a few seconds after a level began. Both of these problems plagued my initial playthrough and persisted even after Croteam put out a massive day one patch on Wednesday. I also experienced a corrupted save, which caused the game to crash to desktop when I attempted to load it.

This all contributes to the feeling that this game is still a little rough around the edges. While Serious Sam 4 plays (and mostly looks) great in combat, its characters look pretty stiff. This fits Sam just fine; if you played The First Encounter back in the day, you'll remember the moments when the camera shifted to a third-person view as Sam ran, ramrod straight, to the next level. It fits Sam's specific variety of generic action hero cool. But for other characters? Not so much. One scene that shows a crowd of resistance soldiers cheering after the usually reticent Sam gives a rousing speech is particularly uncanny, with each character's eyes bugging in their pale faces as they applaud woodenly. I've rarely been more aware that I was watching 3D models go through the motions they were rigged to perform.

Luckily, the combat is as fast and fluid as the cutscenes are slow and creaky. Thanks to Croteam's impressive tech, Serious Sam 4 can now throw an even more ridiculous number of enemies at you at one time than ever before. Some late-game fights put Sam in the midst of the biggest fights I've ever experienced in a game; they're the closest approximations I've seen in a first-person shooter to the actual size and scale of what a violent battle for the planet might actually look like. The only problem is the frequency with which Serious Sam 4 leans on this trick. I enjoy the combat a lot, but outside of watching the story unfold through cutscenes, it really is all that you're doing. It's a tense and exacting game that will often have you leaning side to side as you strafe, utterly engrossed in Sam's bloody struggle for survival. But it's precisely because that core is so tense that I wish Serious Sam 4 had something else to offer in between battles. With the fights forcing you into all-out war so often, most sessions I felt like I was ready to call it a day after a single mission.

Overall, Serious Sam 4 is a successful synthesis of the series' disparate identities, with humor to spare and jaw-dropping large-scale battles. But technical issues, tired tropes and a lack of gameplay variety make it just a solid foundation rather than a new pinnacle for Croteam.

View Comments (21)
Back To Top
7
Good
About GameSpot Reviews 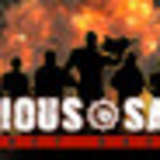 Andrew played 22 hours of Serious Sam 4 for this review. Code was provided by the publisher. 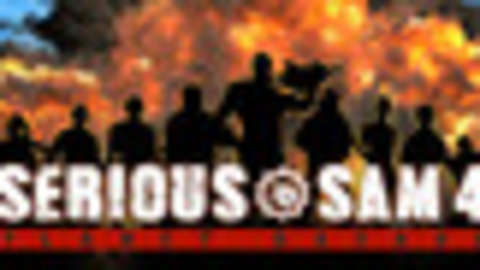