Sega's renowned for creating great-looking arcade racing games, so it's a little surprising it would shove this ugly little game out onto store shelves.

In an effort to get gamers psyched for some high-speed racing action, the introduction to the Sega Touring Car Championship manual informs us that "The world is divided into three types of people: those who watch, those who do and those who do well."

I've never cared for facile aphorisms like that - it sounds too much like something a third-rate football coach would use to fire up a team that was losing at halftime - but after playing Sega Touring Car Championship for a while I couldn't help but come up with one of my own. It goes, "There are four types of games in the world: those that look good, those that play good, those that do both, and those that do neither." And unfortunately for gamers in search of white-knuckled arcade racing action, Sega Touring Car Championship is parked squarely in the final category.

What makes this so stunning is the game's pedigree: Sega's renowned for creating great-looking arcade racing games, so it's a little surprising it would shove this ugly little game out onto store shelves. Yes, the car graphics are acceptable, but thanks to a total lack of 3D support (a patch has been promised for weeks but hasn't arrived yet), you're treated to an eyeful of big, blocky pixels that are supposed to pass for the track and surrounding scenery. What's worse, the track and even the grass and gravel beside it warp and bend into the most peculiar shapes as you "scream" around the track.

Until 3D support does arrive, you'll need a pretty fast PC (I'd guess at least a 200MHz system) to get a smooth frame rate running the game at 640x480x16 where it looks... well, subpar. And if you should wind up running the game in the downright primitive 320x240 mode, you'll get to experience the thrill of going from zero to 100 per in under two seconds. No one's ever going to accuse Sega of putting too much emphasis on realism in its driving games, but when the speed at which you accelerate is chained to the frame rate then you've got a case of sloppy coding on your hands.

STCC gives you the chance to drive four worthy cars, two with four-wheel drive (the Alfa Romeo 155V6TI and the Opel Calibra V6) and two with front-wheel drive (the Toyota Supra GT and an AMG Mercedes C-Class). But as you tool around the four fictional tracks, you'll find it almost impossible to feel any difference in the way they handle and perform, and thanks to the cruddy graphics, it won't be long before you simply don't care.

Race options are divided into two categories, the "PC side" and the "arcade side." The PC side lets you race in championship mode (keep running until you fail to beat a certain time for all laps), time attack (you against the clock), and vs. race (head-to-head over a LAN, modem, serial link, or the Internet); the arcade side features championship mode and Grand Prix (you have to kick butt in championship mode to see this option, though). From the PC side you can adjust things like gear ratios, handling, tires, suspension, and braking, but despite fiddling with them over and over, I still couldn't tell any major difference in handling. And while the manual refers to the challenge of finishing the "circuit" without hospital bills, you can wreck all day long and not see one bit of debris on the track. Hey, if I pile into an abutment at 180mph, I want to see something - anything - happen as a result. Sadly, about all you can expect is a message telling you you're facing the wrong way.

But the biggest problem with STCC is its boring, lifeless feel. The generic tracks don't help matters one bit, especially since there are so few of them, and the incredibly stale rave music that blasts away as you toil to keep up with the anonymous computer opponents only lends an air of cheapness to the entire affair.

What it all adds up to is a game that's not only unattractive, but also extremely un-fun. The promised 3D support might make things look a little better, but it won't do anything to make this game any more thrilling or engaging. If you're looking for down-and-dirty racing action for your PC, there is a slew of better choices available. 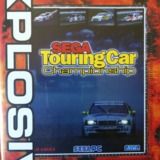