The tennis is merely average, but the challenges and minigames in Sega Superstars Tennis are creatively done and a lot of fun.

After Sonic's recent lackluster performance in Mario & Sonic at the Olympic Games, you'd be forgiven for having low expectations for Sega's next sports game to feature mascots: Sega Superstars Tennis. The characters aren't all A-listers and the tennis isn't great, but the game's interesting court designs, minigames, and classic Sega tunes make for a good package.

Sega Superstars Tennis features 16 characters from classic Sega games. Each player is rated for speed, control, power, spin, or all-around ability. The eight characters that are unlocked from the start include: Sonic, AiAi from Super Monkey Ball, Nights, Ulala from Space Channel Five, Beat from Jet Set Radio, Amigo from Samba de Amigo, Tails, and Dr. Eggman. The unlockable characters aren't quite as interesting and mostly consist of lesser characters from the same games, though Gillius from Golden Axe and Alex Kidd are worthy additions to the lineup. The courts on which you play and the music you hear while you play are inspired by the game's characters and are sure to please anyone who has enjoyed Sega's games over the years.

The characters, levels, music, and even some of the gameplay from these classic franchises are put to good use in superstars mode. This mode is made up of 14 different worlds, each of which is based on a well-known Sega game. The roster includes Super Monkey Ball, Puyo Pop Fever, Samba De Amigo, OutRun, Virtua Squad, Sonic the Hedgehog, Nights, Space Channel Five, ChuChu Rocket, Jet Set Radio, and more. Each is filled with challenges that range from winning single and doubles matches to minigames that mix tennis with gameplay from the franchise on which the area is based.

Many of these challenges are really fun, and some of them are especially creative. In the Virtua Squad minigames, you shoot (aim the ball at) the bad-guy targets that pop up while trying to avoid hitting the civilians, just as you would in Virtua Cop. In Puyo Pop Fever, you're essentially playing the actual puzzle game and clearing the Puyo with tennis balls. ChuChu Rocket is also a lot of fun. Just as you did in the Dreamcast game, you have to lead the mice to their rockets by changing the direction of the arrows on the level and avoiding cats--only this time you change the arrows by hitting them with tennis balls. It's amazing how well some of these games mesh with tennis, and the ones that are done well are really a lot of fun. The only knock against these stages is that the game doesn't do much in the way of explaining the gameplay, so if you've never played ChuChu Rocket before, you're going to be clueless as to how to proceed here.

All of the levels in superstars mode are not created equal. The Jet Set Radio stage has the look of the game, but the tagging minigames are frustrating and uninteresting. Running around the court while collecting rings in Sonic's stage isn't too exciting, either. The superstars mode feels unfinished in places because some of the levels have very little or nothing to do with the game on which they are based. OutRun's court has the look of OutRun, but there are no challenges based on the game. The same goes for Samba De Amigo and Space Channel Five, although some of the excellent music from those games is featured. Golden Axe is particularly noteworthy because, aside from not having any challenges based on the game, the level in which it takes place isn't even based on Golden Axe; it's Curien Mansion from House of the Dead, complete with zombies. But even with these issues, superstars mode is an entertaining and enjoyable way to play tennis.

It's a good thing that superstars mode is so much fun, given that the actual tennis in Sega Superstars Tennis is merely average. The simple controls mean that it's easy to pick up and play, but you'll have mastered the gameplay in a matter of minutes. There are a few different control schemes on the Wii and they work fine, though the motion controls don't add much to the experience. In all versions the controls are tight, but there are times when you'll hit the button to swing and your character won't respond. This seems to be the game's way of punishing you for getting to the ball late. This is kind of cheap, but if it didn't happen you'd rarely lose a point because it's so difficult to hit a winning shot that you're almost always in position to return the ball. Lobs, drop shots, and net play are ineffective, which means that you'll spend your time hitting from the baseline, trying to run your opponent back and forth from left to right until he or she can't get to a shot. Each character has a superstar ability that can be activated once the star below the character begins to flash, but these abilities aren't much help and serve only to interrupt play. There is a distinct difference between the different play styles of the characters, which makes for some variety in how you attack each opponent, but don't expect too much challenge from the artificial intelligence. It's generally fairly easy.

Sega Superstars Tennis gameplay is fun, but it's so simple that you probably won't want to play online, given that the points can go on forever. However, if you do go online on the PlayStation 3 and Xbox 360 (there's no online mode in the PlayStation 2 or Wii versions) then you'll be pleased to know that the game features a surprisingly robust online mode that runs well and is lag-free. You can play a quick match, a ranked match, and even enter a tournament. Additionally, you can use the TV mode to watch the game's best players do their thing live or just enjoy highlights from matches. Unfortunately, you'd be hard-pressed to actually use any of these great features because almost nobody is playing online. We never saw more than four people online at one time, which is a shame considering how much effort the developer put into this aspect of the game.

You won't be amazed by Sega Superstars Tennis' visuals, but it's a decent-looking game that makes good use of its source material. The courts and their surroundings look like they were ripped straight from the games on which they were based. The characters aren't particularly detailed, but they all look fine and are nicely animated. Sonic will spin to get to hard-to-reach shots, Beat will skate around the court, and Nights hovers just above the court while gliding to and fro. Although the game is hardly pushing the Xbox 360 and PlayStation 3 to their limits, the frame rate isn't always steady, particularly on the PS3. Some courts are worse than others during singles play, but the frame rate chugs on any stage if you're playing doubles.

If you're looking to play traditional tennis, then you'll want to stick with Top Spin or Virtua Tennis. But if you want a lighthearted tennis game, enjoy minigames, and have a special place in your heart for the glory days of Sega, then you'll find a lot to like in Sega Superstars Tennis. 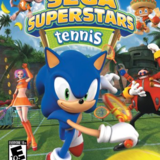 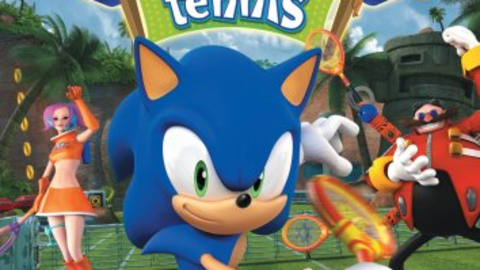 Sonic, Amigo, Ulala and other Sega mascots hit the courts for singles and doubles action.