When you think of sports games from Sega, you probably think of games that are designed to be as faithful to their respective real-life sports as possible. Yet one of its latest sports games, Sega Soccer Slam, throws that design philosophy out the window by taking the sport of soccer into the realm occupied by games such as NBA Jam, NFL Blitz, NBA Street, and other over-the-top interpretations of real-life sports. With its memorable cast of characters, responsive controls, and attractive, highly stylized look, Sega Soccer Slam sets the bar by which any other soccer games of this type will be judged and stands out as one of those action-packed sports games that you should make every effort to play.

Even if you're not a fan of soccer or you don't know well enough to be familiar with some of the basics, Sega Soccer Slam features a practice mode that will give you a step-by-step rundown of the simple maneuvers such as passing, shooting, volleys, dekes, and steals, as well as some of the more complicated combinations of moves like the give-and-go and the quick shot. Soccer veterans would also do well to take a look at this mode to learn how to perform some of the more unique maneuvers like the killer kick and the spotlight shot. But really, no matter what your level of soccer knowledge is, it's just as easy to jump right into one of three other gameplay modes--exhibition, tourney, or quest--in Sega Soccer Slam and start playing right away.

The exhibition mode functions like any other sports game exhibition option, allowing you to select a team, an opponent, and a stadium to play in for a quick game. In the tourney mode, you can play through a tournament that takes place over the course of a few days. While these modes are fun, the crux of the Sega Soccer Slam experience is the quest mode, in which you select from one of five teams and then compete in a series of 10 games. As you start to win games, you'll start to earn money that you can use to unlock character art or items that function as power-ups for your players. For example, you can buy a necklace that gives a specific player additional speed, or purchase a jetpack to enhance his speed even further. The character art and items shown in the soccer store are specific to the team you've selected. In addition, if you successfully complete all 10 matches, as well as the playoff matches that follow, then you'll unlock one of several new stadiums, depending on the team that you're using. Needless to say, the quest mode adds a significant amount of replay value to the game, as you'll likely want to see all the items and extras that you can unlock.

But in actuality, even if the quest mode weren't in the game, Soccer Slam could've just as easily gotten away with only an exhibition and basic tournament mode, simply because the gameplay is executed so well. Despite its over-the-top arcadelike appearance, Soccer Slam demands a surprising amount of strategy for competing against computer- or human-controlled opponents. As previously mentioned, the game features most of the maneuvers that you would normally find in a regular soccer simulation. The give-and-go, volleys, one-timer shots--you'll have to use all these techniques to succeed, particularly in the later stages of the quest mode, when opponents become much more difficult. When you execute these basic moves, you'll charge a meter located at the bottom of the screen, and the energy in this meter can be used to give individual players a brief boost in speed and shot power or to launch a kill shot--a kick that causes the ball handler to launch into the air in slow motion and perform an incredibly powerful kick.

However, executing a killer kick or a spotlight kick--which is similar to the killer kick, except that it's a little less powerful and it doesn't require energy from the meter--doesn't automatically mean you'll score a goal. In fact, the keeper will block the majority of these shots, but what makes this interesting is that you almost want the keeper to block the more powerful shots. Every time you take a shot on goal and the keeper manages to block it, you'll knock off a piece of his armor, which makes him tire. The more powerful the shot, the more armor it will knock off, so it's worthwhile to hold down the shot button to execute a stronger basic shot. Of course, there are times when you'll be able to completely dominate the opposing team, so it won't really matter, but in those tough matches, it pays to take a few solid shots right at the keeper.

In keeping with its over-the-top theme, Sega Soccer Slam's graphics are highly stylized and almost comic-book-like in presentation. From the British rocker Half Pint to the luchador El Diablo, the character designs are incredibly well done, and they give each player in the game plenty of personality. Likewise, the players' facial expressions and animations are a pleasure to see. There are also plenty of small details that add to the overall visual quality of the game. For example, the field becomes worn and will turn brown as players continually trample over particular sections. Also, when you execute the speed and shot boost, you'll notice that each team has a distinct effect to signify the boost. The members of team Tsunami will turn into water and small splashes will fly off the ball as you dribble down the field. Similarly, players on team Spirit will turn purple and cause small skulls made out of mist to appear while moving with the ball.

As good as the characters look, the three default stadiums really aren't that much to look at. While it's worth noting that portions of the stadiums have a polygonal crowd, the three default stadiums are pretty bland. However, the unlockable stadiums look much better, and they generally fall more in line with the theme of the game. At any rate, if you're looking for a game to show off the polygon-pumping power of the GameCube, then you'll have to look elsewhere--but aesthetically, Soccer Slam looks great.

Soccer Slam's sound functions as effectively as the graphics do in providing the characters with additional personality. Each character has a unique theme to accompany his individual goal celebration--Angus from team Volta has a unique bagpipe theme, while Dante from the same team has more of an Italian operatic theme. The trash talking between players is also done well, with plenty of different one-liners, and the commentary does an effective job of calling the basic onscreen action.

Sega Soccer Slam is really the first time any developer has attempted to bring the sport of soccer into the same action-packed field that other companies have taken basketball and football, and it gets it right. The controls are simple and easy to grasp, and there's a healthy mixture of arcade and simulation elements thrown into the gameplay. The graphics, while not necessarily impressive from a purely technical standpoint, are very good stylistically, and the sound does an excellent job of enhancing an already charismatic lineup of players. Soccer Slam is a worthy addition to any GameCube owner's library. 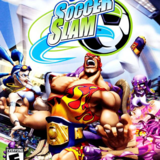 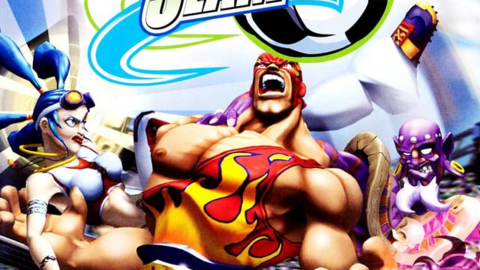