Visual issues aside, though, Seaman is a good game, provided you don't burn yourself out on it.

What do baseball, politics, reproduction, dating, movies, music, television, gangster rap, and pharaohs have in common? Not a darn thing, except for all being integral parts of Sega's virtual pet simulation, Seaman. "That's Sea-man, skin puppet." Combining the rigors of pet care with the novelty of voice recognition, Seaman is sure to be a game that elicits the gamut of controversy, praise, and contempt.

The game starts innocently enough: Pop in the microphone, load the disc, and listen to Leonard Nimoy's deadpan introduction. From there, you're presented with three things: an aquarium, a shell, and an egg. You use the D-pad to improve the temperature and air quality, and then you wait. Eventually, eight tiny monocular creatures will spew forth from the egg, only to be devoured by the squidlike creature that lives in the shell. Soon, however, the squid is ripped to shreds from the inside and, in a life-giving act of revenge, your gill-men are born. Sound twisted? It gets better.

For the next few hours, the humanoid-faced gill-men will continue to grow, exhibiting speech patterns akin to human "baby talk." Once they start uttering familiar syllables, you're supposed to use the A button to activate the microphone and talk to them, which gets you into the meat of the game: conversation. Nothing much will come of it initially, usually just requests for food or environmental needs, but later on, as the gill-men weed out their numbers and gain intelligence, they'll take an interest in you. First, they'll ask about your birthday, then how your family is doing, and - as the weeks progress - the state of politics in a two-party, republic-style system of government. Between each visit, Spock, er... Mr. Nimoy will summarize the prior visit's highlights and even give you hints on how to better care for your Seamen.

While the speech recognition is far from perfect, it's constantly impressive to witness just how much "Poddy" (as I came to know the last remaining Seaman) could understand. If I greeted him with "'Sup?" he'd respond with "Word." Amusingly, "PlayStation" yields "Mmm, that name sounds familiar." The speech recognition isn't without its flaws, however, in that some words aren't recognized as easily as others, forcing you to sit through many repeats of Seaman soliloquy before you get another crack at pronouncing "Rastafarian." After five attempts at getting Poddy to understand "Vermont," this reviewer nearly jumped out the window.

Later on, your Seaman will enlighten you to the existence of another habitat across the room, a terrarium, in which you'll raise yummy insects to feed to your Seamen. Beyond this point, though, Seaman will clam up, leaving you to wonder if the honeymoon has ended and the next few months will be filled with sleep-inducing fish voyeurism. When this happens, it's hard not to get complacent and allow boredom to set in. Your Seaman simply needs assistance setting in motion the next stage of its evolution, and is too wrapped up in its own thoughts to mention that moving the large rock would help this endeavor. Eventually, the Seaman will give birth to six tad-men. The tad-men will then evolve into frog-men, and just as with the gill-men before, engage you in a number of intellectual conversations. From these conversations, Seaman correctly guessed that I'm a Democrat, but he didn't know how to cope with my positive feelings on exercise despite my status as the world's most slothful reviewer. If you make it this far, you can even learn the history of the Seaman origin, dating back to a time before the pyramids were built.

While the game is interesting and the conversation is endearing, Seaman does have a few subjective problems. First, time investment. You have to load up and care for your Seamen at least twice a day. If you go more than 16 hours without checking up, you will have dead Seamen. Then, there's boredom. There are times when your Seamen just aren't talkative, and while this ennui factor may be comparable to owning real fish, it lessens Seaman's novelty. Furthermore, with overbearing biases on issues such as religion, video game violence, and American social norms, Seaman oftentimes comes off as Sega's bully pulpit as opposed to a mild-mannered life simulation.

Visually, Seaman is solid, but by no means impressive. You can look over the top of the aquarium and scare the pants off the Kimoths in the terrarium, but the smiles that cross their humanoid faces are about as expressive as they get. Seaman's insect and aquatic life is well animated, but the laboratory environments are uncharacteristically plain by contrast. There's also some slowdown. When four Kimoths are flying about or you have six tad-men in the aquarium, the game slows down like you wouldn't believe, more than you'd expect a second-generation Dreamcast title would.

Visual issues aside, though, Seaman is a good game, provided you don't burn yourself out on it. If you haven't got an hour a day over the course of six weeks to invest or happen to own actual living pets, Seaman's gameplay may seem boring and unoriginal. However, the voice recognition aspect is innovative and does much to alleviate these issues. Still, the game needs more activities and less preaching before it's truly ready for prime time. Good? Yes. Innovative? Sure. Worthy of the same praise as Soul Calibur, Crazy Taxi, and Virtua Tennis? No. 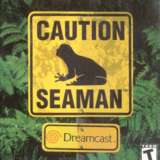