Scooby-Doo! Unmasked isn't much of a game, but it is a decent way to interact with a feature-length Scooby-Doo story.

The average player probably won't get much out of Scooby-Doo! Unmasked, but younger players and fans of the cartoon will definitely want to give it a look. As a game, it's nothing special--just a mediocre platformer stuffed with all of the usual platforming elements. In terms of storytelling and presentation, however, Unmasked grabs the imagination and delights the senses easily as much as a feature-length version of the cartoon show would.

In fact, a good way to describe Scooby-Doo! Unmasked would be to call it an interactive cartoon. The game opens with the familiar Scooby-Doo theme and montage, intercut with scenes from the video game instead of the cartoon show. Frequently throughout the game, full motion video scenes put together using game-engine graphics, gradually advance the story. The voice cast includes many of the actors from the recently produced cartoon run, most notably Frank Welker (Fred) and Mindy Cohn (Velma). Yes, that is Mindy Cohn from the early 1980's hit TV show The Facts of Life. Adam West, known best for his role as Batman in the campy 1960's TV series, also lends his talent to the game, although not as Batman.

West plays the role of Winslow Stanton, the grouchy proprietor of Monstrous Fright and Magic, a company that produces robotic monsters for theme park attractions. When the Mystery Inc. gang arrives at the MFM lot, they discover that Stanton's creations have run amok at local theme parks. Worst of all, Freddy's cousin, Jed, has gone missing and is the prime suspect. In typical Scooby-Doo fashion, those meddling kids set out to clear Jed's name and get to the bottom of the monster infestation. The story is full of whodunit-style twists and turns, providing a good excuse to send Scooby and the gang into "haunted" theme parks, and delivering plenty of jokes and yuks along the way. Hollywood writer, Flint Dille, of Transformers and G.I. Joe fame, helped pen the game's story, which explains why it adheres so closely to the spirit of the cartoon show.

The actual game that's beneath the storytelling, though, is just...mediocre. Players control Scooby-Doo throughout the entire game. Scooby-Doo can kick, roll, and pounce on enemies, as well as acquire three different costumes that enable him to perform kung fu, fly like a bat, and launch plunger arrows like Robin Hood. Combat mainly involves beating the tar out of the generic rats, spiders, and costumed monsters that appear out of nowhere. The bosses at the end of each world do require a little more thought and effort. Much of the gameplay involves safely navigating Scooby through lengthy platforming sections, which tend to drag on and employ every platformer stereotype in the book, including jumping across gaps, swinging from ropes, hand-walking across suspended ladders, and activating switches. There are collect-a-thon aspects, too. Players have to collect clues to unlock future levels, Scooby Snacks to refill Scooby's health meter, food items to extend his life meter, and a substance called "mubber," which is needed to activate Scooby's costumes.

We've seen all of this stuff in countless other video games. Scooby-Doo! Unmasked does nothing to make its platforming elements seem fresh or interesting. Furthermore, many of its best gameplay ideas are underutilized. Scooby's costumes are employed primarily as a means to an end, and tend to deactivate once you've triggered the switch or reached the part of the level you're supposed to reach. His attack repertoire has a few snazzy kung fu combinations in it, but you're pretty much forced to use the slide attack all the time, because it gets rid of enemies the quickest and lets Scooby slide right through attacks without taking damage. What kills it the most is that the level designs and puzzles are linear and straightforward, so much so that signs and arrows specifically tell players what to do and where to go next.

To add insult to injury, the game as a whole is very brief. Most players will reach the end in approximately three hours. If you want to achieve 100 percent completion, you can tack on an extra hour in order to track down remaining clues, food items, and trap pieces. The problem isn't the number of levels; there are plenty of them--roughly 30 in all, spread across four theme parks. The problem is that the linear level designs, straightforward puzzles, and brain-dead monsters make the game a veritable speed-run. Bonuses include a monster encyclopedia and a character art gallery. The Xbox game also includes a trailer for the upcoming DVD release of What's New Scooby-Doo - Monster Matinee.

Even though the game itself is weak, the ride may be worthwhile if you're a Scooby-Doo fan. The story is captivating and the game mimics the sights and sounds of the cartoon extremely well. Scooby, Fred, Daphne, and all of the other characters and monsters are cel-shaded, packed with polygons, and fluidly animated, so they move around just like animated cartoon characters. That degree of detail isn't evident in the backgrounds, but the large levels and Tony Hawk-style free-roaming make up for the murky textures in the scenery. By the same token, the upbeat music and the voice work turned in by the cartoon's voice actors mean the soundtrack is faithful to the cartoon.

All told, Scooby-Doo! Unmasked isn't much of a game, but it is a decent way to interact with a feature-length Scooby-Doo story. 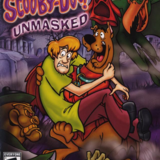 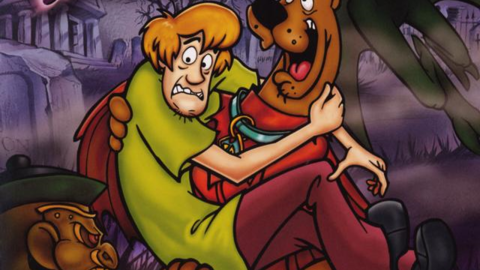 Fred's cousin, Jed, is missing and it is up to Scooby and the gang to find him before its too late.