It re-creates the look and feel of the old cartoon series with astonishing accuracy and is also pretty fun.

It's rare when an adventure game based on a cartoon license turns out to be decent, let alone enjoyable. Scooby-Doo! Night of 100 Frights is one of those exceptions. Even though it's certainly not the next Super Mario Sunshine, the gameplay is at least on par with that of other third-party platformers for the GameCube, and the dialogue totally captures the spirit of the Scooby-Doo cartoon characters.

Throughout the game, you control Mystery Inc.'s canine mascot, Scooby-Doo, who is best known for such timeless phrases as "Ree hee hee," "Ruh-roe," and "Scooby dooby doo!" All these phrases are present as speech samples in the game, and you'll hear them repeatedly, since Scooby is the only character onscreen during the actual gameplay. Conveniently, the rest of the gang disappears at the beginning of the game, abducted by a new villain known only as the Mastermind. This leaves it up to Scooby-Doo to explore the 14 different areas and more than 84 levels of the mansion in order to rescue his friends.

Scooby's basic actions are fairly standard, in that he can run, jump, and bash monsters. It's the inventions scattered throughout the mansion that give this game some depth. Some of the better items include a shovel for digging up treasure, galoshes for trudging through tar, and an umbrella that enables Scooby to float through the air. In order to solve the case, you need to track down these inventions and gather the required number of Scooby Snacks in order to gain access to all 14 areas of the mansion.

The gameplay feels generic at times, but never to the extent that the Scooby-Doo license seems pasted on. The majority of the areas in the mansion are the typical sorts of situations you've come to expect from 3D platformers--namely, switch puzzles, platform jumping, slippery surfaces, rope swings, and the occasional battle against a boss character. The game does its best to keep things interesting by varying the presentation of these situations, so sometimes you'll navigate an area that is fully 3D and allows for unlimited exploration, while at other times your movement is limited to the horizontal or vertical axis and involves leaping over pits or avoiding a rampaging flood.

Scooby-Doo! Night of 100 Frights is also pleasing from an aesthetic standpoint. Everything has a grainy and washed-out look that resembles the hand-drawn style of the television show. The backgrounds and textures aren't exceptionally large or detailed, but the fact that they genuinely resemble settings from the classic TV show more than compensates for the lack of overall clarity. The character animation is also pretty good, especially for the 20 or so classic Scooby-Doo monsters you'll encounter. Every last detail is accurate, right down to the lip-syncing and clothing. The roughest aspect of the game's visuals is its camera perspective, which tends to shift unpredictably and doesn't always reveal dangers lurking just out of view.

Like its visuals, the audio in Scooby-Doo! Night of 100 Frights is low-key, but it is in line with the standards set by classic Scooby-Doo cartoons of the 1970s. The underlying soundtrack is spooky, but it includes a variety of humorous overlays, such as the frequent caterwauling of ghosts and bats, as well as a laugh track that pipes up whenever Scooby uses one of the professor's inventions. During boss battles, there are wacky sing-alongs that feature the game's voice actors. In general, there is a lot of voice-over in the game, and THQ was smart to recruit the same set of actors from the recent direct-to-video Scooby-Doo releases. Their performances contribute a level of authenticity that is absent from so many other cartoon-licensed video games. Fans of the classic Scooby-Doo television series will also recognize a few familiar voices playing key guest roles, including Tim Curry as the Mastermind, Don Knotts as the groundskeeper, and Tim Conway as Professor Graham.

Scooby-Doo! Night of 100 Frights definitely isn't impressive for its technical merits. Nevertheless, it re-creates the look and feel of the old cartoon series with astonishing accuracy and is also pretty fun. 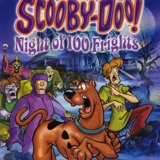 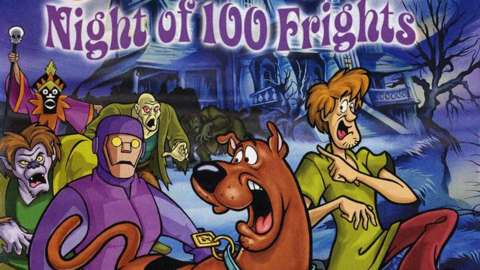 Scooby-Doo: Night of 100 Frights is a good game and an excellent re-creation of a cherished cartoon.