Hokey premise or not, the game has a lot going for it.

Ubi Soft's S.C.A.R.S. - or Super Computer Animal Racing Simulation - is a futuristic racing game that takes up that heretofore unclaimed space midway between Psygnosis' Wipeout XL and Nintendo's Super Mario Kart. Sure, it's got a damn silly back story (virtual reality racing in animal-themed cars circa the year 3000), but that doesn't hinder the game from being a surprisingly fun combat racer.

You begin with five animal cars (mammoth, lion, rhino, shark, and mantis) that all vary in degrees of speed, armor, grip, and weapons. If you want to go for speed, you use the speedy mantis or shark, while if you'd rather shoot your way through the competition, there's the heavily armored and weaponed mammoth or rhino. The title's Grand Prix mode is composed of three main cups good for at least several races each and a customizable cup that can be set for up to eight races. The challenge mode has you race against one of four extra rides (scorpion, cheetah, cobra, and panther) that become playable only once you've beaten them, which is far from easy - they don't call it challenge mode for nothing.

The earlier reference to Wipeout XL pertains mostly to S.C.A.R.S.' futuristic theme, color palette, and fast speed, while the gameplay has more in common with Super Mario Kart, with all the power sliding around corners that goes on within. The power-up and weapon system is similar to both, with numerous and varied icon-based items spread all over the tracks for you to pick up. The standard missiles, shields, and turbos are present, along with the more imaginative magnet (freezes drivers in place for a few grueling seconds), two kinds of energy barriers that have to be leaped over, and a ticking bomb that gets passed back and forth from racer to racer like a hot potato.

Visually, S.C.A.R.S. is an eye-candy store. It has great graphics with nicely varied textures, fantastic lighting effects (especially from the vehicles' headlights during the night races), and a rather ingenious way to avoid pop-up. Namely, since the game is set in a virtual reality environment the likes of the Holodeck in Star Trek: The Next Generation, a blue, wire frame sneaks out whenever the world is too tough to render. It might sound cheap when explained, but it doesn't take away from the looks since it never happens on the actual track. Other positive bits include a good soundtrack, smooth control, an intuitive control setup, and split-screen modes that don't cut into either the frame rate or perspective too badly.

Hokey premise or not, the game has a lot going for it. It's not incredibly deep but offers a lot of good, dumb driving/shooting fun. Fans of Wipeout XL and Super Mario Kart aren't going to forget what they drove in on, but they should still enjoy S.C.A.R.S. just the same. 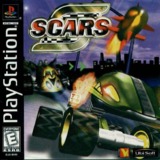