It's got an engagingly original story, but this throwback to bygone console role-playing games botches the gameplay fundamentals.

Sands of Destruction is a new role-playing game for the DS that unabashedly models itself after the console RPGs of yesteryear. While more recent games in the genre typically eschew certain once-common elements, like random encounters and turn-based combat, Sands of Destruction embraces them. Unfortunately, this effort at recreating the magic of many classic console RPGs is not very successful. While it tells an interesting tale, glaring problems with the combat, along with dungeons and puzzles that are more frequently frustrating than satisfying, prevent Sands of Destruction from replicating the captivating gameplay of its most fondly remembered forebears.

The central figure of the game is a young man named Kyrie. He's born into a world in which humans are second-class citizens beneath the dominant ferals, which are humanoids with animal characteristics. Like so many RPG heroes before him, Kyrie's modest upbringing gives him no clue as to the lofty destiny that awaits him. However, whereas most heroes in his position are destined to save the world, Kyrie's fate seems quite different. After discovering that he carries within him a powerfully destructive force he can't seem to control, he falls in with a group called the World Annihilation Front that is dedicated not to saving the world but to destroying it. Morte, the front's feisty female representative, believes that the world is too corrupt to be saved and that the only hope for humanity lies in its destruction. Kyrie has his misgivings about this, but he is swept along on a journey that reveals much about the world and about Kyrie himself. The cast of characters is memorable, particularly Taupy, a tough-talking bounty hunter whose gruff demeanor contrasts humorously with his adorable teddy-bear appearance. And the tale puts a fun twist on the age-old save-the-world concept, sprinkling enough surprises throughout to keep it interesting to the end.

Unfortunately, the gameplay makes it difficult to maintain that interest. As you make your way through the game's many forests, towers and other hostile environments, you'll be interrupted after every few steps by an encounter with monsters. In the early part of the game, the turn-based battle system just seems a bit baffling. There's a morale system at work, which influences how many battle points each character has, and those battle points determine how many actions a character can take each time his or her turn rolls around. The problem is that neither the game nor the accompanying manual make it terribly clear what influences a character's morale, so you may find yourself with fewer battle points than you should normally have and no clue as to what to do about it. It also will take some experimentation to get familiar with the flow of battle, the types of attacks at each character's disposal, and how your choice of attack leads to a specific follow-up attack. A quick tutorial early on could have done wonders to clear up any confusion.

At a certain point, though, any confusion you might have experienced becomes moot. As you fight, you earn customization points that you can spend on your character's attacks to make them stronger or more accurate. Once you've poured enough points into a character's flurry attacks, he or she becomes capable of chaining them together, unleashing a stream of hits that's frequently enough to kill an opponent many times over. This makes even most boss encounters laughably easy. You'll likely reach this point relatively early on, and from then on, the overwhelming majority of battles can be quickly won with a few presses of the Y button, requiring no thought or consideration on your part whatsoever. The combat becomes uninvolving, and the story is sapped of drama. For instance, a standoff against waves of feral guards is presented as desperate and hard fought, but in fact, it couldn't be easier for your party to wipe out their opponents.

To make matters worse, you'll be interrupted by these dreadfully dull encounters with frustrating frequency. This is especially aggravating when you're in the midst of one of the numerous mazes you must navigate on your journey. There's a map on the top screen, but that doesn't mean the mazes are easy. Finding your way through the mazes sometimes requires some switch triggering or experimentation with magic portals, and more often than not, there's no discernible logic to the solution. You may spend a lot of time running in circles, using trial and error until you stumble on the solution. There's nothing rewarding about solving a maze when the answer doesn't even make sense, and the fact that you're slowed down tremendously by all the battles you have to fight (or run away from) just makes these sequences that much more of an ordeal.

Sands of Destruction is a decent-looking game. There's a good amount of variety to the environments you'll explore on your journey, from pristine cities with flowing rivers to quaint autumnal villages. In many places, you can rotate the camera around to get a better view of your surroundings, which is helpful. On the other hand, the use of 2D sprites in the 3D environments doesn't always work well. For instance, the camera likes to pull in on the characters at key moments for dramatic effect, but this has the downside of making the characters look blocky and featureless. And there isn't much variety to the monsters you face throughout the game. While there are some fearsome and memorable boss designs, in each area you'll mostly fight monsters that are just palette swaps for the same few types of monsters you've fought elsewhere.

The most noteworthy aspect of the sound design is the extensive voice acting, which proves to be a mixed blessing. It certainly helps bring the story to life, but the quality is inconsistent, with some actors delivering their lines with enthusiasm while others sound wooden. And there's generally a pause of about a second between each line, making these interactions irritatingly slow. There's no option to speed them up, which means you can either endure them at their set pace or skip them altogether, missing much of the story that is the only reason to play this game.

Most players will probably complete Sands of Destruction in about two dozen hours. There are no choices to make along the way and only one ending, so it doesn't have much replay value. The wildly unbalanced combat and poor dungeon design make even reaching the ending once something of a chore, even if it's not much of a challenge. Even considering its unusual and interesting story, there's just too much wrong with this game to overlook. With so many excellent RPGs available for the DS, there's not much reason to spend your time with this one. 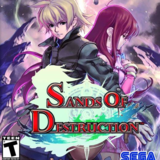