It's a decent port of an excellent arcade game.

San Francisco has been synonymous with action-movie car-chase scenes for decades. The steep hills and winding streets, it seems, were created specifically with the genre in mind. It was only natural for someone to create an arcade racing game built around the city. Atari Games has done just that, and Midway is bringing it home.

In November, Atari Games released a new version of the game, San Francisco Rush: The Rock Alcatraz Edition, featuring four new tracks, a variety of different shortcuts, and more. Midway's Nintendo 64 rendition is a composite of both previous games, including extra cars accessed by acquiring the six to eight keys hidden throughout each course.

In essence, the home version of San Francisco Rush can't truly compete with the behind-the-wheel experience the arcade machine furnishes - not even with a Rumble Pak. But the console system does score in the variety of options it offers. You can select the total laps in a race, the number of computer-controlled opponents, and whether the course should be reverse direction or a mirrored version. You can choose how foggy or windy a run should be, how difficult the computer is to defeat, if cars should be disqualified after they crash, and if some or all of the gauges (such as the speedometer and race position) should be turned off to give a better view of the screen - a great help in the split-screen, two-player mode, since you lose half the screen to your opponent.

It's to the game's credit that you can customize your race so easily, as these options really play up the title's replay value and fun factor. The two-player mode also dispels the need to link together two $7,000 arcade machines in one living room. To simulate the force-feedback steering wheel of the arcade game, the title supports the Rumble Pak, though differently than most previous Rumble-ready games. Instead of shaking only when the vehicle hits an obstacle, the device vibrates the pad harder and harder as you move more deeply into a turn, simulating drag on the tires. It's probably the best use of the peripheral I've seen or, I guess, felt.

Of course, the N64 hardware isn't as capable as that of a full-fledged arcade unit, but visually the game stands up to its coin-op counterpart fairly well. Quite a few polygons were shaved off the cars and backgrounds (and some buildings and trees just had to go), but these measures don't detract too much from the game's look. Overall, the game's main drawback is the soundtrack, which runs the gamut from grating to awful. Admittedly, the more strident tracks pick up a laughable and unmistakable camp quality after a while ("whoa oh oh"). Music aside, the developers have done as good a job as possible translating SFR to the N64, but, in perhaps unfair comparison to the arcade version, there's just something missing - it doesn't quite measure up to the experience of sitting behind the wheel of the coin-op. When it comes down to brass tacks, it's a decent port of an excellent arcade game. While it's a little disappointing, the game is, nonetheless, well worth picking up. 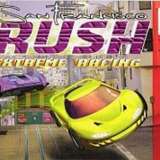 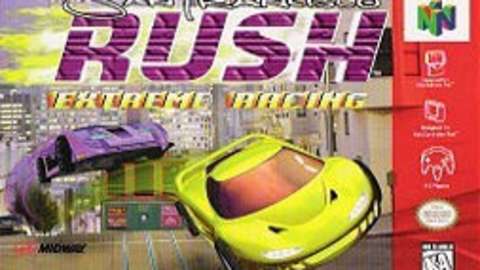 Folks, this game is about as bad as games get.