Seldom missing a beat when compared with its cabinet-bound counterpart, Rush 2049 is the ideal home port of an arcade game.

Midway's Dreamcast port of San Francisco Rush 2049 - the latest installment in its San Francisco Rush series - looks and plays simply marvelously. Seldom missing a beat when compared with its cabinet-bound counterpart, Rush 2049 is the ideal home port of an arcade game. Featuring a complete and functional version of the arcade game, plus a smattering of extra modes, Rush 2049's package is definitely the one to emulate.

Those new to the San Francisco Rush series will find 2049 an ideal point from which to begin. In a nutshell, the series is known for its uniquely "arcade" take on the pursuit of auto racing, characterized by an almost platformer-like emphasis on shortcuts and secret paths and high-flying stunt-capable vehicles. While pure racing is definitely possible - and not to mention quite enjoyable - playing an SF Rush game without attempting to take advantage of the ludicrous jumps and tempting shortcuts would equate to cheating yourself out of 60 percent of the Rush experience.

Rush 2049's emphasis is just where it should be in the areas of mad, arcade racing, high-flying stunts, and convoluted shortcuts. Making a welcome addition to the home version, all of the game's cars boast retractable wings, which give the stunt factor a shot in the arm by making it possible to control a vehicle's trajectory in the air. While by no means a hard science, the wings let you control the basic direction in which your airborne car loops and whirls, which gives you a much greater a chance of walking away from a tricky stunt. Also, on many occasions, in order to access certain secret paths, you'll use the wings to steer your car in the general direction of the paths, which requires subtle technique on your part, as the wings tend to overcompensate a bit.

The track designs range from cut-and-dried to truly outlandish. All of Rush 2049's tracks are based in futuristic San Francisco, and as per the series' conventions, they are replete with varied hidden areas and shortcuts. Oftentimes, you run over switches that activate ramps. This adds to the game's platformish play focus and allows you to rocket into secret areas. Mainly intended to give you an edge timewise, the secret areas often house bonus medals (which are scattered throughout the game) and, depending on the level of advantage they offer, can get pretty deadly to traverse. The Marina track is fairly tame, featuring secret areas that merely sit on the side of the racing line, while the Metro track features multitiered secret areas, in an almost maze-like setup. While there is a relatively small number of tracks, each can be played through in reverse, which allows access to a whole new set of secret areas. The only bit of weirdness encountered was that certain in-track elements - such as trees and some road signs - existed only visually; that is, while playing the game, I drove right through many of these objects, without so much as a stall in progress, let alone a wreck.

Graphically, Rush 2049 looks gorgeous. With nary a chop in sight, the game whisks at a wonderful rate, slowing down only barely noticeably during the most cramped, populated corners. The textures are clean and detailed, the tracks are lush, populated, creatively lit, and teeming with life, and the car models are both functional and interesting. The game's only visual problem is related to the camera's activity during the stunt mode, but considering the rest of the game's brilliant visual production, this problem is a rather soft and easy blow to take.

The game's multiplayer modes are quite a bonus; aside from the multiplayer racing mode, Rush 2049 features a battle mode (à la Mario Kart) and a stunt mode. The battle mode is quite a riot, as it not only allows up to four players to battle it out on an arena track, but it also lets you blast away at each other with various weapons, in a Twisted-Metal-meets-Mario-Kart spirit. While not as deep as a bona fide vehicular combat title by any means, the battle mode is a nice addition and something that fans of the game will quite appreciate. The stunt mode lets you and your friends compete for stunt points throughout specifically designed tracks rife with ramps, bumps, and nigh inaccessible platforms. One of the game's most enjoyable elements, the stunt mode rewards you with the gumption to perform daring sets of stunts and the skill to land them safely - quite a nice addition.

It need not be repeated that Rush 2049 is quite an arcade racer. With a multitude of elements that let it transcend that narrow and often underrated genre, racing fans and those simply seeking a wild, entertaining experience would do well to check it out. 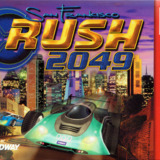 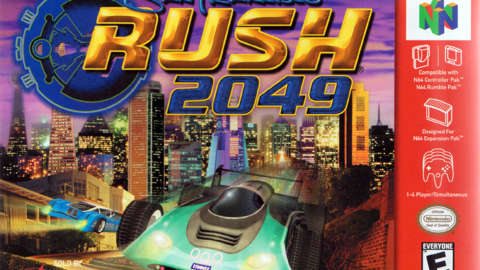 Visually, aurally, and in terms of gameplay, there's nothing good about this version of Rush 2049.