State of War makes a couple of marked improvements to Koei's first PSP Warriors game, but the action remains just as tedious as ever.

While Samurai Warriors: State of War marks the debut of Koei's samurai-themed action series on the PlayStation Portable, the game really might as well be a sequel to the publisher's first Dynasty Warriors game, which was released during the PSP launch last year. Granted, that could have been said about the console Samurai Warriors game, as well. Like the Dynasty Warriors games, Samurai Warriors is a hack-and-slash action series that revolves around a number of fabled warriors from Sengoku-era Japan, fancied up to the point of making them crazy caricatures that couldn't possibly resemble reality. And like the first outing for Dynasty Warriors on the PSP, State of War condenses the typically large-scale battles the game is known for into bite-size chunks via a turn-based progression. On some levels, State of War does fix problems found in the last handheld Dynasty Warriors game, but those fixes do nothing to add any real depth to the oft-repetitive and entirely tedious gameplay, nor does the completely perfunctory multiplayer mode add anything positive to the package.

For the sake of argument, let's assume that you aren't intimately familiar with the ins-and-outs of the Warriors games. In the Samurai Warriors series, you pick from one of 19 garishly dressed warriors from ancient feudal Japan and set forth on a quest to conquer Japan's various territories and clans while representing one of the clans. The storylines in the console versions are done with CG cutscenes and some fairly cheesy voice acting with even more cheesily melodramatic writing, but on the PSP, the stories are told exclusively with slides of talking heads and text. While the absence of the slickly produced cutscenes is unfortunate (but understandable), the lack of voice acting isn't a detriment by any stretch of the imagination, though the lack of the high-energy, wailing guitar soundtrack from Dynasty Warriors is a bit of a bummer.

On consoles, a Warriors game tends to be a fairly involved process. The battles are large and often involve dozens upon dozens of soldiers fighting at once, lots of obscure objectives, and a big chunk of your free time. In Dynasty Warriors on the PSP, those battles were scaled down into quick bursts via a new turn-based battle system. Essentially, every area of territory on a battle map was sectioned out into a grid, and each time it was your turn, you could move a set number of spaces. Once you settled on a space, you'd be transported into a typical third-person battle sequence. If you won, you'd take the territory. Simple as that...sort of. Admittedly, the grid system in Dynasty Warriors was kind of convoluted, but in Samurai Warriors, it has been cleaned up and made more user-friendly. It's a simple-to-use interface, and it takes only minimal knowledge of strategy to play effectively, since all you need to do is advance to enemy territory and occasionally complete objectives like acquiring the means to breach enemy gates, use levies to lower water levels at river crossings, and so on.

Of course, you do all of that simply by engaging in exceedingly brief battles. What kind of battle you enter into depends on what sort of terrain you're taking on. If it's just flat land, all you usually need to do is bust through a bunch of grunt soldiers. If you go after a stronghold, you'll have to take down some defense captains. If you go up against unit leaders, you'll have to fight off at least one of the major featured warriors in the game. Winning battles will often yield charms, which you can use while on the main grid screen. Certain charms can be used to stifle or attack enemies via the grid, while others can be used to heal or boost your side. Really though, these charms amount to only a minor addition to the overall scheme of a battle, and victory pretty much rests on your ability to mash on the triangle and square buttons alternately.

As has been the case with all Warriors games of recent memory, Samurai Warriors' action is completely brainless. The artificial intelligence of the opponent soldiers is practically nonexistent--they'll just stand around, waiting to get stabbed. Higher-ranking officers are better, but it's still way too easy to bowl over just about every enemy in the game that isn't the last guy in the enemy military chain. And there's just no variety to the action. There are a few combos and special attacks, but all of them revolve around mashing on two buttons for a few minutes at a time. It gets very old, very quickly.

One thing Koei did improve about the battles on the PSP is the slowdown. The frame rate runs much more smoothly in State of War than it did in Dynasty Warriors. Unfortunately, the trade-off was the draw distance. Texture and character pop-in is rampant throughout the game. You have to be within five feet of enemies to see that they're there, and backgrounds look like white walls of fog if the pieces of scenery are too far off in the distance. On top of all that, the environmental designs are bland as all get-out. Drab textures and next to no set decoration beyond an occasionally dull-looking building are the order of the day here. The warriors themselves are more detailed than everything else, but they kind of have to be, otherwise this would be the dullest-looking game on the system.

Speaking of dull, the only gameplay mode addition to Samurai Warriors of any note is an ad hoc multiplayer mode that might as well not even be multiplayer. There are two modes here: vanguard and bandit. In vanguard, your goal is to kill five enemy captains, whereas in bandit, you're simply killing enemies to collect their gold. Both of these modes are for up to four players, but the interaction between you and your opponents is practically nonexistent. On your screen, your opponents are represented by artificially intelligent opponents. If you attack them, an artificially intelligent opponent on their screen will go after them, and vice versa. What, precisely, is the point of this? How does this even qualify as multiplayer when you're practically competing against the computer more than you are your live opponents? It's a very strange mode, and it's not a fun one, either.

No doubt, if you enjoyed Samurai Warriors on consoles, you'll take at least something positive away from State of War. It's very much the same formula translated reasonably well onto a handheld platform. The trouble is that the formula itself is no better off in handheld form than it was on consoles, and the action becomes utterly stagnant after a short while. Though good third-person action games of this ilk aren't exactly in abundance on the PSP at this time, it's still hard to recommend State of War to all but the most dedicated fans of the series. 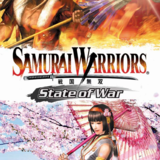 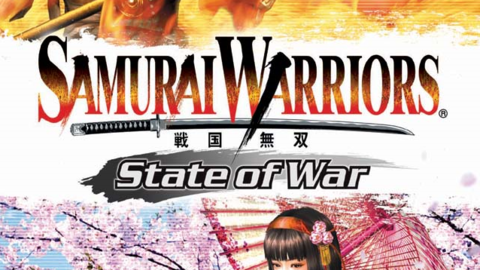 Koei brings its samurai beat 'em up to the PSP, which features up to four players in head-to-head battles via Wi-Fi.

7.4
Sign In to rate Samurai Warriors: State of War