Ska Studios' predominantly hand drawn art in Salt and Sanctuary is deliberately rough around the edges, a stylistic carryover from its Dishwasher series. It leans on the darkest of earth tones, which is fitting for a game this gloomy and unwelcoming. You couldn’t fault a Ska fan for mistaking Salt and Sanctuary as a sequel to The Dishwasher, at least at first glance; beneath the familiar presentation lies a game that's more like Dark Souls than anything else.

Anyone who has played a Souls game before will immediately recognize how committed Ska was to creating a 2D version of From Software’s landmark series. You see it in the user interface, from the grid inventory system to the exhaustive character details that rates stats down to the decimal. You feel it when you stop pretending it’s a hack-and-slash game and embrace defense as much as offense, creating a more gratifying tactical experience.

It culminates when you reach the first boss, The Sodden Knight. He’s an apt introductory boss who trains and humbles you through hardship and death. Every boss encounter is a lesson in behavior and attack memorization, and it's rewarding when you learn to instinctively predict an incoming combo and come up with the right response in the blink of an eye. This form of reciprocity doesn’t always guarantee success. There are a few bosses that follow up combos with unexpected single strikes, which can throw you off your game if you were eager to pounce and lower your shield. While you can argue that it’s a cheap and frustrating boss maneuver, it’s thankfully not a common occurrence. Many of the tactics required for survival in Dark Souls--in particular the roll dodges and liberal use of shields--are just as necessary in Salt and Sanctuary. Upon a second play through, you wonder why you ever struggled with many of these bosses to begin with.

Salts are this game’s souls. You lose them when you die and you have only your next respawn to get them back from the place you perished prior. Carrying a lot of salt will present leveling opportunities as well as increased tension in a game where the risk of death is pervasive. Salt and Sanctuary also adheres to the classic JRPG resurrection economy where a mystery cleric takes a percentage of your gold after each death.

Salt and Sanctuary’s vague lore, from its weapon descriptions to character classes, adds a great deal of mystery.

Salt and Sanctuary’s world is both heavily gated and backtrack-intensive. The overall structure is made up of foreboding outdoor areas and labyrinthine interiors. It’s its own kind of Metroidvania world where progression involves a mix of straightforward advancement past bosses and the acquisition of new skills. There’s gratification in finding shortcuts to areas that were previously separated by hours of playtime. The same positive sensation is felt when you learn the ability to walk upside down. Numerous areas that were inaccessible are now within your reach and your hardest decision is choosing where to go first. It’s a lovely problem to have.

Salt and Sanctuary’s vague lore, from its weapon descriptions to character classes, adds a great deal of mystery. It’s intriguing to deduce the strengths, weaknesses, and weapon specialities of each class. Like test driving cars, spending hours just to find the right one for you feels like time well spent. There’s mystique to the names of the bosses like the Untouched Inquisitor and The Third Lamb. The process of mentally filling in the gaps with the clues goes hand-in-hand with the fiction you create for yourself as you pick up the game’s scant nuggets of exposition. Even the story itself starts off with an enigmatic tone, where the initial premise of rescuing a princess is not as straightforward as it seems.

Where ‘Salt’ represents the intensity of battle, ‘Sanctuary’ stands for the various safe havens that offer respite. These checkpoints primarily serve as hubs for the player to increase levels, stock up on items and gear, and activate co-op. Playing with a buddy is notably beneficial during boss fights, where one can serve as a decoy while the other friend takes point on offense.

Each sanctuary is tied to a particular faction--referred to as Creeds. In keeping with the game’s cryptic designs, studying the differences of each Creed is a process, but one worth completing. You can increase your devotion to a faction by offering the remains of the foes you’ve vanquished. Higher devotion results in improved vendor inventory, but there's a more important reason to choose your Creed wisely: leaving one in favor of another causes the jilted faction to turn hostile. I was inclined to keep the peace during my playthrough, content with one of the first Creeds I came across, whose wares were strong enough to help me complete my mission.

Salt and Sanctuary is wholly engrossing from every angle, from its happy marriage of combat and exploration to its ominously gripping art direction. Its world is rich in ambiguity, well designed to fill up message boards with discussions on the theoretical histories of its bosses to the origins of the seven Creeds. For as much as it unabashedly borrows from Dark Souls, it’s an achievement that Ska Studios managed to give its homage an identity of its own that can be appreciated on its own merits. 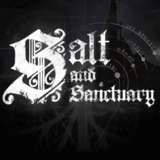 Miguel beat Salt and Sanctuary and explored much of its optional content over the course of 16 hours. GameSpot was provided a copy of the game for the purpose of this review.