The name pretty much says it all. Rune Factory: A Fantasy Harvest Moon takes the well-established farmlife formula of Natsume's Harvest Moon games and transplants it into the type of baroque fantasy world found commonly in Japanese RPGs, complete with an amnesiac protagonist and plenty of dungeon-crawling. The introduction of combat to Rune Factory is a significant one, and though it's a big change of pace from the farming, fishing, and family-building that have been at the heart of the Harvest Moon games, it avoids feeling tacked-on. Still, this is all mostly for the sake of established Harvest Moon fans, and the overall pace of the action in Rune Factory doesn't feel much different from its predecessors.

Your character wanders into the town of Kardia at the start of the game, exhausted, hungry, and without much sense of who you are or where you've come from. You're taken in by Mist, a young female farmer who rather generously provides you with a house to live in and an open field for you to tend to. Past the introduction, Rune Factory isn't in a huge hurry to reveal the secrets of your hazy origins, and the focus quickly turns to making you into a proper farmer. Growing crops is as straightforward as always, requiring you to purchase or otherwise procure seeds, till the soil, plant the seeds, and then water them daily until they reach maturity. Crops can be sold for cash, which can then be used to buy more seeds, better farm equipment, and a variety of other goods and services that can be purchased in town. Different crops will flourish during different times of year, and though some crops will come to fruition more quickly than others, slow-growing crops often command a higher market price. As any diehard Harvest Moon fan can tell you, all this farm labor is more fun in practice than it might sound, but that doesn't negate the fact that Rune Factory takes a while to get going, and even once it finds its rhythm, the pacing is pretty low-key.

After you've plowed a certain portion of your field, the mayor of Kardia will grant you permission to explore a nearby cave, which happens to be just brimming with monsters. The real-time combat you'll engage in isn't terribly satisfying, but the caves contain a number of important resources. You'll find ore that can be mined and used to forge new farm equipment and weapons, as well as field space that maintains the same climate year-round, allowing you to grow seasonal crops whenever you want. Perhaps most significant are the monsters themselves, which can be befriended and then used to perform simple tasks on the farm or to provide you support in battle. The monsters are ultimately what make the dungeon-crawling worthwhile, because the more you go adventuring, the more monsters you can befriend, and thus the more efficient and profitable your farm becomes.

Nearly as significant as the introduction of combat is the visual style of Rune Factory, which looks nothing like the Harvest Moon games of the past. The tiled, kid-friendly presentation that has been a hallmark of the series for years now is replaced with an anime-inspired look that is detailed, if a little derivative. All of the background art looks great, although the polygonal models used for the characters that inhabit Rune Factory look pretty chunky, and don't mesh particularly well with the background art.

While time management has been a key discipline in past Harvest Moon games, energy management seems to take priority in Rune Factory. There are two measurements for your character's well-being: his hit points and his rune points. While hit points determine how much damage you can take, rune points are used whenever you perform an action like plowing, watering, fishing, mining, swinging a sword, or just about any other productive activity. Once you deplete all of your rune points, any rune-dependent activities will eat into your hit points. What happens when you run out of hit points depends on where you are. If you're on the surface, you'll pass out and wake up the next morning at the local physician's office. If it happens while you're exploring a cave, the game ends, forcing you to restart from the last time you saved. The severity of this penalty feels out of character, though it ultimately just conditions you to save your progress before you go running into a cave. Hit points and rune points can be restored with a good night's sleep, a hot bath, or by consuming some special items, and rune points can also sprout up alongside your crops. A big part of playing Rune Factory is deciding how you expend your limited daily allotment of rune points, and these decisions can determine the overall flow of the game.

As with its predecessors, you could wile away dozens and dozens of hours in Rune Factory. It's a pleasant spin on the tried-and-true Harvest Moon formula, and the combat integrates surprisingly well with the farmwork. For better or for worse, though, this is still very much a Harvest Moon game, which is sure to please fans, but probably won't mean much either way to those who missed the appeal of the previous games. 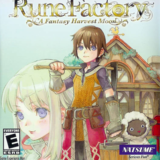