The Runabout series not only hasn't kept up with the times (Crazy Taxi is this type of game almost fully realized), it's lost a lot of what made it so appealing in the first place.

There's a new strain of driving game that's been steadily evolving into its own little subgenre over the last few years. It began with the driving section of Fox's Die Hard Trilogy, then returned with Climax's Runabout (released in the US as Felony 11-79), Sega's arcade title Crazy Taxi, and GT Interactive's Driver, and begins anew with Runabout 2, the Dreamcast version of Crazy Taxi, and Super Runabout for the Dreamcast (due out soon in the US as Motor Madness). In all of them, you get behind the wheel of a fast-moving car, race around town gathering items (a person, a bomb, money, or whatever), and try to get away before the ever-present ticking clock runs out.

The original Runabout revolved around a mystical statue that had been broken into a dozen pieces and spread across three cities. A rich collector with mysterious plans hired you to retrieve the pieces of the statue. Besides being rewarded for stealing the bits and escaping, you gained cash bonuses for destroying as much of the environment as possible without wrecking your car completely. Every storefront, minivan, and plate glass window you drove through earned you more money, while, unlike in Interplay's Carmageddon series, pedestrians were off-limits. Trying to run them down only made them hop away while hurling insults about your driving skills.

The storyline has gone slightly futuristic in Runabout 2, but the premise remains much the same - you still steal items and attempt to exit the stage before the clock runs out and the cops arrive. The original game was full of good, dumb fun, but since it only offered three levels, it was over far too quickly. There are now six courses, which include South Island, a Florida-like ocean-side city; Casino Town; a burg that could double for Las Vegas; Yen City, a Shibuya- or Shinjuku-like town; the Alamo-like Castle Gate City; and Desert Town (literally, a town in the desert). All of them have branching routes that are only opened up in later missions, much like in Namco's Ridge Racer. So there's a lot more ground to cover this time. There are also a greater number of cars than in the first game. You have the ability to alter vehicle handling, there is now analog-controller support available, and some stages require you to track down a getaway car before escaping, making things a little more challenging. But for all its improvements, Runabout 2 backpedals an equal or greater distance.

The police have less presence in the sequel and make only minor, halfhearted attempts to pursue you. Time is now your main enemy, which robs the game of any sense of urgency that being chased provides. It's also pretty unlikely that you'll wreck your car during a mission, which was a real danger in the first title. The graphics are an improvement over the original, as the game's environments now appear less paper-thin and far more varied. But there's still a lot of draw-in on the horizon, and the game's overall look is dated when compared with other PlayStation titles in the genre . The soundtrack is a much greater disappointment, though. The fantastic Dick Dale-style surf tunes found in Runabout have been replaced by a handful of utterly lifeless rock tracks, and the select screens are set to sounds normally heard only in elevators. The Runabout series not only hasn't kept up with the times (Crazy Taxi is this type of game almost fully realized), it's lost a lot of what made it so appealing in the first place. 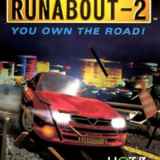