Rumble Roses XX introduces a few positives into the first game's formula, but most of the content feels recycled, and the game is still rather unseemly.

Konami made its first foray into the world of professional wrestling back in late 2004 with Rumble Roses, an all-female grappler for the PlayStation 2 that was developed in tandem with longtime wrestling developer Yuke's. The game was in no way designed to be a simulation wrestling game. The characters represented patently over-the-top caricatures of various sexual fetishes and character archetypes (the naughty schoolgirl, the feisty cowgirl, the S&M slave, and so on), and the game included some of the most insane storylines and wrestling action you could possibly sit through without having your head literally explode. Ultimately, the semi-creepy vibe and dearth of content sank Rumble Roses, despite its inclusion of a fairly competent wrestling engine and great graphics. The newest Rumble Roses adventure is Rumble Roses XX for the Xbox 360, and with it, Konami has at least addressed a couple of key issues. Gone are the bananas storylines; in is competitive online play. Sadly, the improvements stop there. The gameplay, while still sound, isn't captivating enough to hold your attention for terribly long, and once again, the constant onslaught of schoolboy-grade sexual fantasizing just makes the whole game feel kind of tacky.

If you played Rumble Roses on the PS2, you'll be immediately familiar with the characters presented here, because all the same ones are present and there actually aren't any new ones. Like the last game, there are dual versions of each character available, one good and one evil. In addition to that, each good and evil character has a "superstar" version that can be unlocked as you play. The superstar version wrestles similarly to the good or evil version of the character she represents, but with stronger moves and snazzier costumes. As neat as the superstars are, they're still just variations on characters you've already seen multiple versions of. If you take away all the variables, you've really only got 11 unique characters to choose from, and again, they're all the same ones from the PS2 game. That's just lazy.

Speaking of laziness, Konami fixed one problem with the original Rumble Roses by axing the feature altogether, rather than trying to improve upon it. Rumble Roses had this ludicrous story mode that had individual storylines for each character. These storylines could be likened to the worst brand of wrestling fan fiction imaginable, with unfathomably bad voice acting. It went from oddly amusing to completely insufferable in a short amount of time. So now there's no story mode at all. Instead of a proper story or career mode, what you get is a completely hands-off brand of single-player experience. You'll boot up and jump right into the game. You'll pick up a character and travel around this map area that shows different fight arenas, your locker room, and modes like exhibition and online play. Once you've got your character, you travel from fight to fight, building up your wrestler's popularity until you eventually get a title match. Of course, you'll pretty much have to figure this out on your own. The game really doesn't provide any tangible feedback about how many matches you're supposed to fight to get a title shot. Even after you've maxed your popularity to the highest level, you don't just get a title shot right off the bat, so you might be a little confused about where you're supposed to go or what you're supposed to do. After all that, you just pick another character, and repeat the whole process over again.

At the very least, there is more fight variety to be had in Rumble Roses XX. You've got basic singles, tag team, triple threat, handicap, and fatal four-way matches, as well as a few gimmick matches. The queen's match is a standard match with an ending stipulation: The loser will be humiliated in a fashion determined at the beginning of the match by the opponent. These stipulations include such dastardly humiliations as forcing the loser to play a particularly tough game of limbo, pushing the loser into a swimming pool, making him or her dance, or just having the loser pose sexily. Of course, there's no actual work involved in this. Both players just sit back and watch the end result for as long as they can take it without wondering why they aren't doing something better with their time. The other main gimmick match is a street fight that involves punching and slamming opponents until a health meter runs out. This mode feels pretty tacked on, like a cheap way to cash in on the whole hot chicks fighting element from the Dead or Alive games, or something. Not that the whole game isn't probably trying to do that on some level, but the wrestling system just doesn't feel conducive to a typical fighting game experience, thus making it seem out of place.

The actual wrestling of Rumble Roses XX remains a relative bright spot, although, like the last game, the simplicity of it eventually makes winning a total breeze. XX uses what is, in essence, a dumbed-down version of the Yuke's SmackDown! engine. As such, there is some strategy to the fights. Reversals are separated out between grapples and strikes, and it's up to you to predict what your opponent is going to hit you with to successfully pull off a reversal. Submissions are separated out by body regions, including head, body, legs, and arms. The more damage you do to one area, the more likely you are to make the opponent tap out. The whole humiliation factor is still present here as well. You'll build an opponent's humiliation meter until it's full by performing certain moves, at which time you can do a humiliation move, which is a more elaborate and slightly silly finishing maneuver.

So while there's a decent amount of variety to the action, it all becomes fairly routine and predictable after a couple of hours. Opponent behaviors aren't hard to predict after a few matches, and once you've figured that stuff out, you can win any match that comes your way without much hassle. Online play does remedy this slightly, since fighting against other people is always less predictable than fighting artificially intelligent characters. But the online play itself is neither deep nor especially compelling. You can just hop on, find opponents, and fight. There is a ranking system, and the online matches we played were exceptionally smooth and lag-free. But unless the online competition proves to be heavy and fierce, there isn't an awful lot there to keep you coming back.

Of course, this wouldn't be a Rumble Roses game if XX didn't find a way to make you at least a little bit uncomfortable with its ridiculous method of hypersexualizing the girls of the game, and nowhere is this more apparent than in the edit modes. Similar to DOA Xtreme Beach Volleyball for the Xbox, you can buy unlockable costumes and play dress-up in this mode with the various wrestling babes, including schoolgirl uniforms, barely there swimsuits, and the like. But it doesn't end there. Rumble Roses XX goes the extra mile and lets you adjust muscle tones and body shape too, including the character's breast size. Adding to the creepy factor is the photo shoot mode, where you can take one character (or a pair), and dress her up, and then instruct her to pose in specific ways while you adjust camera angles and take snapshots. You can then trade those snapshots with people online. While adolescent boys are undoubtedly going to have a field day with this, there's not really enough variety to the outfits or poses to capture anyone's imagination for too long.

That vibe permeates the actual wrestling, too. Like the PS2 game, Rumble Roses XX's various moves and animations go as far out of their way as possible to give you all the chances to observe bouncing breasts and exposures of undergarments you could possibly need. Obviously, Rumble Roses XX doesn't take itself very seriously, so all of it is done with a measure of cheekiness (no pun intended), but believe it or not, even silly levels of perversity can't carry a game by themselves, and very few, if any, of the game's other elements are strong enough on their own to keep you engaged once you've had your fill of panty shots.

On the PS2, Rumble Roses had very impressive graphics, and on the Xbox 360, the same holds true. In standard definition, the game looks like a significantly cleaner version of the same graphics and art found in the last game, with improved ancillary visuals, like the arenas, crowds, and lighting. In HD, the character model details become much more tangible. Costumes all show off a level of sheen not found in regular definition, skin textures look much more realistic, and some of the, shall we say, "moving" parts of the various ladies just look...well, better. Many of the animation-clipping problems found on the PS2 are gone as well, though not all of them. You'll still see costume pieces, and sometimes entire body parts, clip through one another in spots, but it's not nearly as bad as what you would find in the last game.

Rumble Roses XX is a better game than its PS2 predecessor, but there are still too many annoying things about it to make it a success. Again, there isn't a single thing wrong with wanting to put attractive, well-built women in a wrestling game, but Rumble Roses XX insists on taking it to such levels of objectification that it just becomes hard to put up with after awhile. Not to mention that very little else of what the game offers, both from gameplay and feature standpoints, is strong enough to carry the load apart from the whole titillation aspect. In the end, Rumble Roses XX is another merely decent wrestling game that could have been a lot better had the focus been on the gameplay, and not on its more sordid elements.

View Comments (1)
Back To Top
6.6
Fair
About GameSpot Reviews 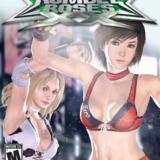