Rugrats: The Movie for the Game Boy is the only way you can relive the surprise hit without buying a VCR

Did you know that you can play the Rugrats theme music with just one finger? Just tap six piano keys from left to right and back again to hear what we mean. This nugget of useless trivia isn't included in the press materials, but we consider it important anyway. Rugrats: The Movie is the only way you can relive the surprise holiday hit in your hands without buying a portable VCR, and to the great astonishment of many, it's actually pretty good. Not groundbreaking or innovative in any way, to be sure, but it does what it sets out to do well.

Don't go throwing away your copies of Super Mario Bros. DX or Wario Land II just yet, though - this is strictly for the kids. Grown-ups who are brave enough to admit they like watching the cartoon won't find a particularly challenging game here. The fact that the game only uses one button is a good indication of this. As you would expect, this game follows the basic premise of the movie - Tommy's newborn brother Dil has gone missing and it's up to the babies to find him - over a stream of side-scrolling platform levels. A special bonus for Game Boy Color players comes in the form of two overhead racing stages, where the kids drive around in the Reptar mobile collecting bonuses. They're a nice addition and break up the gameplay well - a shame, then, that they're over too quickly.

The main part of the game is made up of progressing from left to right through a number of well-detailed and extremely colorful locations, avoiding contact with pretty much anything that moves. And collecting glowing objects. Some stages require a set number of items to be pilfered, and getting them all opens up bonus levels designed solely to increase your high score. The stages are impressively large and full of hidden areas to explore, although the way the screen sometimes doesn't scroll until you're almost at the edge leads to a few needless deaths. Of course, babies aren't known for surviving falls from tall tables and balloons. The difficulty level is set just right - younger players can explore the levels in comfort thanks to the good collision detection and responsive controls, while those with a bit more Game Boy experience can use the generous time limits to ferret out hidden objects.

Game Boy conversions of children's movies usually get slammed, especially when they're side-scrolling platformers, but Rugrats: The Movie still has its na&iuml;ve charms. If you're a fan of the franchise then by all means, check this out. 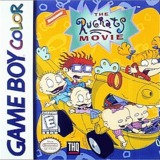 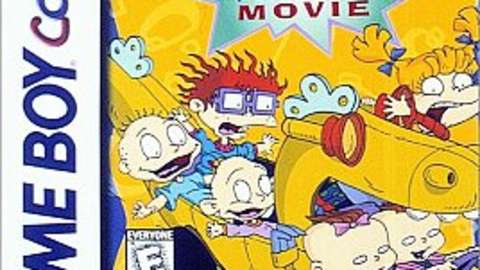 Rugrats: The Movie for the Game Boy is the only way you can relive the surprise hit without buying a VCR