Koei's 10th Romance of the Three Kingdoms game doesn't do much to mark the occasion, but it still offers the same esoteric war strategy experience that keeps dedicated fans coming back time and time again.

The Romance of the Three Kingdoms series is the Madden Football of console strategy games. Each year a new installment is released with slightly tweaked rosters, a few new music tracks, and maybe a couple of novel, off-the-field modes to play with. Despite the slight differences though, the actual gameplay never changes drastically, and the objective is always the same: to win the Super Bowl, which in the case of the Three Kingdoms games means to unify ancient, war-torn China. Koei's 10th Romance of the Three Kingdoms game doesn't do much to mark the occasion, but it still offers the same esoteric war strategy experience that keeps dedicated fans coming back time and time again.

Romance of the Three Kingdoms X is set in the same period of Chinese history as the previous games, which are all based on the 14th-century novel by author Luo Guanzhong. The story is a somewhat fictionalized account of the end of the Han Dynasty in the second and third centuries AD. This installment in the series lets you experience history by playing as one of 650 prominent characters from the period. If you prefer to write your own history, you can use the fairly robust create-an-officer mode to design a character to your own specifications. Once you've chosen an officer--or created your own--you can play several different scenarios, each of which starts you off in a different situation to challenge you to adapt your strategy to fit a variety of circumstances.

For further variety, you can choose to play the game in historical or fictional mode, depending on how closely you want to stick to the actual storyline. In historical mode all of the officers will act as they did in the story, and major historical events will occur regardless of your involvement. If you choose to play in fictional mode, officers will act differently, and the historical events will be turned off. In both modes, you can choose to play as a free officer, vassal, prefect, viceroy, or sovereign, depending on how much control you want to exert over your surroundings. If you're feeling ambitious, you can form your own rogue army and start capturing cities to build your force and eventually become a powerful ruler. Or, if you prefer, you can simply travel around the countryside as a free officer fulfilling requests or socializing with other officers. The game ends when every city in China is under the control of one force or another, which will eventually happen no matter how you choose to play the game. Based on how you spend your time in the game, you'll get one of a number of different endings. So, while the main storyline doesn't change drastically from game to game, your perception of it does, since the life of a ruler is much different from that of a low-ranking officer.

Although the game experience varies depending on your choices, the outcome of those choices will still be represented by a number of different stats such as fame, loyalty, strength, and social standing. As a result, your efforts in the game are simply translated to numbers in one of the countless menu screens you'll be using to issue commands, check your status, or gather information. For veteran strategy game players, this is familiar territory, but newcomers will be left wanting something a bit more substantial than a bunch of numbers. At times you'll get so bogged down in the menus that the game will play more like a text-based adventure game than a strategy game. Hit a button to allocate funds, hit another to allocate forces, hit it again to sell food, and hit it again to repair your city's defenses--this is pretty much what you'll spend most of your time doing in Romance of the Three Kingdoms X. Fortunately, Koei has done a pretty good job of designing the interface to be fairly clean and straightforward. Some selections are oddly buried under seemingly unrelated headings, but for the most part everything is organized and automated enough to prevent the experience from becoming too frustrating. Simple solutions, such as hitting the circle button to quickly verify a command rather than clicking through several confirmation screens, help to keep the game from grinding to a halt. However, the menu-driven gameplay still gets tedious at times, and if you end up ruling a large force, you'll spend much of your time completing menial micromanagement tasks rather than plotting your dramatic and heroic conquest of China.

When you do set out to conquer the land, you'll get a break from the menus in the form of a turn-based strategy battle system. You can choose to let the computer fight the battle and just wait for the results, but you'd be missing out on the best part of the game. Once you assign a force to attack a city, you'll march to the city and a battle will commence. To win a battle you have to destroy the main gate of the city, destroy all of the enemy troops, or defeat the commanding officer. There is a 30-round limit to fulfill one of these conditions, which keeps the battles from becoming tiresome. The turn-based battle system is similar to that of any other turn-based strategy game in that you move on a grid and attack enemies with various types of units. There's a rock-paper-scissors dynamic to the battles--foot soldiers are strong against archers, archers are strong against mounted soldiers, and mounted soldiers are strongest against foot soldiers. This makes for fairly well-balanced battles because it means a small force still sometimes has a chance against a much larger force. Once you breach the city walls, the battle continues within the city, where you'll have to defeat any remaining enemies.

Whether you're in a duel, on the battlefield, in your castle, or just exploring the countryside, you won't see much in the way of impressive graphics. The character portraits and backgrounds have a colorful hand-painted look, but the rest of the graphics are strictly utilitarian. But that works just fine for a strategy game where most of your time is spent reading text and checking stats anyway. There's only so much that can be done to dress up a menu screen, so fancy visual effects take a backseat to the interface, which is perfectly acceptable for a game of this type.

The music and sound effects are also about standard for a Romance of the Three Kingdoms game. The soundtrack is appropriately dramatic, with heavy chanting and powerful war drums, but it's kept subtle enough that you won't realize it's there until you find yourself humming one of the tunes. The sound effects are few and far between, and most take place during battle. You'll hear the same few sounds over and over, but again they fit the need here, and they aren't repeated to the point of becoming annoying. There are no voice-overs in Romance of the Three Kingdoms X; the dialogue is text only.

Romance of the Three Kingdoms X may not be quite the grand, celebratory leap forward you might expect from such an anniversary, but in keeping the gameplay familiar Koei offers perhaps the best reward to the longtime fans who have kept the series alive for more than 15 years. This game probably won't convert you if you aren't already interested in the strategy or history of it, but if you can get past the bare-bones presentation, you'll easily get wrapped up in the deep strategy and intriguing storyline this game has to offer. 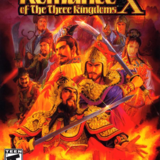 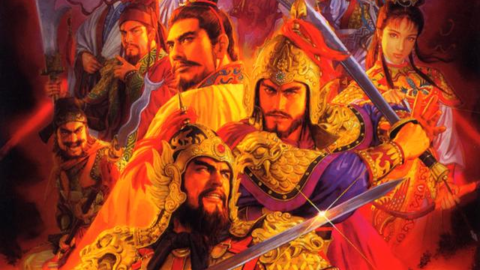 Romance of the Three Kingdoms X

Romance of the Three Kingdoms X is the tenth installment in Koei's strategy game series. You can discover China's turbulent history by taking on the roles of Ancient China's most extraordinary figures, including peasant-turned-emperor Liu Bei, conqueror Cao Cao, the elite warrior Zhao Yun, and brilliant strategist Zhuge Liang.

8.6
Sign In to rate Romance of the Three Kingdoms X